Lawn mowers have long taken their place among the necessary equipment from the owners of suburban and private houses, as well as employees of park facilities. In the summer, such equipment is operated quite intensively. For reliable and durable operation of lawnmower engines, the quality of fuels and lubricants, in particular oils, is important. About oils for 4-stroke engines of this type of garden machines and is described in this article.

Why do I need lubrication?

Gasoline engines of lawn mowers are internal combustion engines (ICE), in which the driving force transmitted from the ICE to the working bodies (cutting knives) is generated due to the energy arising in the combustion chamber of the cylinder when the fuel mixture is ignited. As a result of the ignition, the expansion of gases occurs, causing the piston to move, associated with the mechanism for further transfer of energy to the final organ, that is, in this case, the knives of the lawn mower.

Thus, in the engine there are many large and small parts that need lubrication in order to prevent, if not completely prevent their abrasion, destruction, wear, then at least slow down these processes negative for the mechanism.

Due to engine oil, which enters the engine and covers its rubbing elements with a thin layer of oil film, scratches, burrs and burrs on the metal surface of parts practically do not occur on new units. 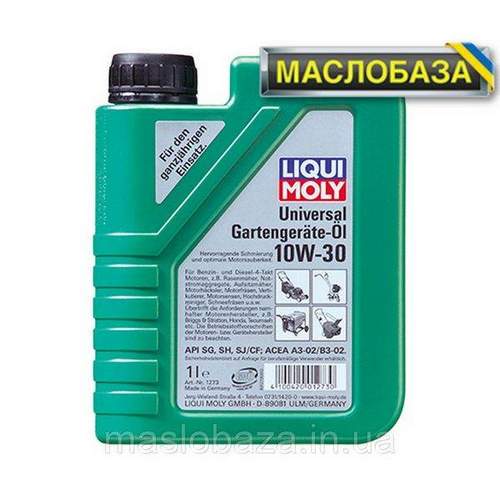 But over time, this can not be avoided, since the development of gaps in the interface still occurs. And the better the oil, the longer the service life of garden equipment will be. In addition, with the help of high-quality lubrication, the following positive phenomena occur:

Features of a four-stroke engine

Gasoline engines of lawn mowers are divided into two groups: two-stroke and four-stroke. Their difference in the method of oil filling is as follows:

Thus, a 4-stroke engine has its own pump, filter and piping system. Its oil system is of a circulation type, that is, unlike a 2-stroke analogue, the lubricant in such a motor does not burn, but is supplied to the necessary parts and returned to the tank.

Based on this circumstance, the oil requirement is also special. It should retain its properties for a long period when, as for the lubricating composition of a two-stroke engine, the main quality criterion, in addition to the main properties, is the ability to burn without leaving a trace, without leaving carbon deposits.

It is best to lubricate 4-stroke engines of lawnmowers with a special oil designed for them in accordance with the ambient air temperatures under which the equipment will be operated. For instance, specialized grease of 10W40 and SAE30 grades are quite suitable for four-stroke mowers in their operational parameters, that can be used at ambient temperatures in the range from 5 to 45 degrees heat.

These oils are recommended as optimal types of lubricant, given the seasonal operation of lawn mowers. It is unlikely that anyone would have the idea to “start” a lawn mower at a negative temperature outside the window.

For lack of specialized oils, you can use other classes of oils used for automobiles. It can be brands SAE 15W40 and SAE 20W50, also used at positive temperatures, but only their threshold is 10 degrees lower than specialized ones (up to 35 degrees). And also for 90% of the number of available models of four-stroke lawn mowing units, SF oil will work.

A container with engine oil for a four-stroke lawn mower should be marked with the “4T” mark. Synthetic, semi-synthetic and mineral oils can be used. But most often they use semi-synthetic or mineral, since synthetic oil will be very expensive.

And in order not to guess which oil to pour into the engine of your model of mower, it is better to look at the instructions. It indicates the necessary type of oil, and the frequency of its replacement. It is recommended that only the types of oils specified by the manufacturer be used before the warranty repair expires in order to maintain the issued guarantees. And then to pick up something more affordable, but, of course, not inferior in quality to branded oils. You should not save on oil quality.

How often do you need to change grease?

As noted above, the manual for garden equipment with a 4-stroke engine must always indicate the frequency of oil change. But if there is no instruction, then they focus primarily on the number of hours that the equipment has worked (hours). Every 50-60 hours worked, you need to do an oil change in the engine.

However, in the case when the site is small and you can process it in no more than one hour, it is unlikely that the lawnmower will work even half an hour from the norm for the entire spring-summer season, unless you rent it out to neighbors. Then the oil must be replaced when preserving equipment in the fall before the winter period.

Replacing the lubricant in the engine of a lawn mower is not such a complicated operation as, for example, changing the oil in a car. Everything is much simpler here. The operation algorithm is as follows.

This completes the process of replacing the lubricating fluid, and the unit is again ready for operation.

What kind of oil should not be added?

Grease intended for two-stroke counterparts must not be poured into a four-stroke engine of a lawn mower (the labels “2T” are put on the labels of oil containers for such engines). However, this cannot be done and vice versa. In addition, it is unacceptable to fill in the liquid that was stored in plastic bottles from under drinking water.

This polyethylene is not intended for storage of aggressive substances in it, therefore a chemical reaction is possible that affects the properties of both lubricants and polyethylene.