Alteration Of A 12v Screwdriver For Lithium Batteries 18650

Conversion of a screwdriver to lithium batteries 18650

The industry has been making screwdrivers for a long time, and many people have older models with nickel-cadmium and nickel-metal hydride batteries. Converting a screwdriver to lithium will improve the performance of the device without buying a new tool. Now many companies offer services for altering screwdriver batteries, but you can do it yourself.

The body is often assembled with self-tapping screws, other options with latches or glue. The glued block is the most difficult to disassemble, you have to use a special hammer with a plastic head so as not to damage the parts of the case. Everything is removed from the inside. You can reapply only the contact plates or the entire terminal assembly for connection to the tool, charger.

There are objective disadvantages in Li-Ion batteries, such as poor performance at low temperatures. In addition, when converting a screwdriver to 18650 lithium batteries, a number of difficulties may arise:

Important! If the drill or screwdriver is cheap and not of very high quality, then it is better not to rework. This can cost more than the cost of the tool itself.

Important! The elements must be connected in series, then the battery voltage is added up, and the capacity does not change.

A piece of heat shrink tubing is then placed over the battery, but this is not required. You can also put on heat shrinkage on the protective microcircuit to isolate it from contact with the batteries, otherwise sharp soldering projections can damage the cell shell and provoke a short circuit.

12 V batteries are often used for screwdrivers. Factors to consider when choosing a Li-Ion battery for a screwdriver:

READ  Bosch Screwdriver How to Insert a Drill

Important! Before assembly, it is necessary to fully charge all elements to equalize.

The lithium-ion battery of the screwdriver cannot function normally without the BMS protection board. Instances on sale have different parameters. BMS 3S marking assumes, for example, that the board is designed for 3 elements.

What you need to pay attention to in order to choose a suitable microcircuit:

Important! The magnitude of the overload tripping current is not very important. This value is offset from the workload current. In case of short-term overloads, even if the tool has turned off, you must release the start button, and then you can continue to work.

Connection diagram of the elements with the protective board

Whether the controller has an autorun function can be determined by the presence of an Automatic recovery entry in the technical data. If there is no such function, then in order to restart the screwdriver after the protection is triggered, it will be necessary to remove the battery and connect it to the charger.

The Li-Ion batteries installed in the old compartment can be connected in the following ways:

The fastest of them is the first, however, when using it, contact zones with transitional resistances are formed, which are palpable at high operating currents. In addition, the dimensions of the compartment in this case increase significantly, which is not always convenient from the point of view of ergonomics.

Connecting elements for soldering is suitable for those who have mastered the techniques of working with a soldering iron well, which is very important in this case. The fact is that when soldering a battery, this operation must be done as quickly as possible so as not to overheat the contact zones of its poles.

The so-called spot welding is the most convenient and reliable method of all those considered earlier. But since the presence of a welding machine in a personal household is very rare, you will have to contact specialists, which is also not very cheap. Let’s consider the most accessible of all these approaches (soldering) in more detail.

Before you disassemble the case of the old battery compartment with your own hands, you should pay attention to the fact that it can be made using the following technologies:

To disassemble the glued block located on the screwdriver, it is most convenient to use a mallet with a plastic head, which excludes possible damage to the device case. Before dismantling, all unnecessary parts of the structure should be removed from the compartment, leaving only the contact plates (their assembly) necessary for connection to the tool itself and an external charger.

READ  How To Cut Tile Tiles With A Tile Cutter

Before converting a screwdriver for a lithium-ion battery, you must carefully familiarize yourself with the intended modes of its operation as part of this tool. In this case, the following factors should be taken into account: 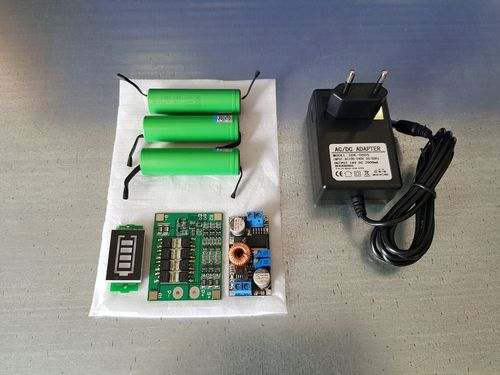 Note! These features explain the inadmissibility of using a lithium battery from an old laptop, which is often mentioned on the Internet. Such batteries are not designed for high discharge current and do not have the required technical parameters.

Note also that when choosing several 18650 cells inserted into one battery compartment, it is not allowed to use cells with very different capacities.

Based on the operating voltages of old and new batteries (1.2 and 3.7 Volts) indicated in the technical characteristics, the proportion of 1 to 3 should be adhered to when selecting their quantitative ratio. So, for a 12-volt battery compartment of nickel-cadmium cells (10 pieces), it is remade in such a way that 3 lithium batteries can fit in it (this results in a small voltage shortfall).

We also recall that before assembly, it is necessary to fully charge each of the installed elements, which will ensure the equalization of their potentials.

The bases and difficulties of the alteration. Modification of the compartment

To realize the above advantages, it will be necessary to solve a number of issues that arise when converting a screwdriver battery to li-ion, namely:

Important! Taking this circumstance into account, it is necessary to try in advance to adjust the total voltage of several new elements to its old value (the figure below shows nickel-cadmium batteries).

In some cases, it is not possible to achieve the coincidence of the supply voltages at all, which makes it necessary to abandon the alteration or look for other products that are suitable for this parameter. At the same time, it is important to observe the measure and calculate the economic feasibility of switching to a li ion 18650 (otherwise, the upgrade may be more expensive than the tool itself).

What you need to estimate before starting work?

Also, more lithium cells will give more capacity. This means longer operating time of the screwdriver.

Next, you need to choose the right lithium cells themselves. Form factor without 18650 options. The main things to look at are discharge current and capacity. According to statistics, during normal operation of the screwdriver, the current consumption is in the range of 5-10 amperes. If you suddenly press the start button, then the current can jump to 25 amperes for a few seconds. That is, you need to choose 18650 lithium batteries with a maximum discharge current of 20-30 amperes. Then, with a short-term increase in current to these values, the battery will not be damaged.

The nominal voltage of lithium cells is 3.6-3.7 volts, and the capacity in most cases is 2000-3000 mAh. If the battery case allows, you can take not 4, but 8 cells. Connect them two by two into 4 parallel assemblies, and then connect them in series. As a result, you will be able to increase the battery capacity. But not every case will be able to pack 8 cans of 18650.

And the last preparatory stage is choosing a controller. According to its characteristics, it must correspond to the rated voltage and discharge current. That is, if you decide to assemble a 14.4 volt battery, then choose a controller with this voltage. The working discharge current is usually chosen half of the maximum permissible current.

Connecting to a screwdriver

How long does it take to replace batteries?

Rework screwdriver on lithium batteries will take approximately 2 hours. If all parameters are checked, then it will take 4 hours.

Everything can be done independently, without the help of another person. Conversion of a screwdriver to lithium batteries :. But contact welding and selection of batteries cannot be carried out without specialized equipment.

This step can show how lightweight the lithium battery is. The weight of the Ni-Mh device was 536 g. The weight of the new lithium device is 199 g, which will be quite noticeable. We managed to win 337 g in weight. At the same time, an increase in energy capacity is observed.

The battery is mounted in the case. The voids are filled with soft material from the packaging.