Alteration Of A Screwdriver For 12v Lithium Batteries

Converting the battery of the screwdriver to Li-Ion

I will not say anything new in this article, but I just want to share my experience of upgrading the batteries of my old Makita screwdriver. Initially, this tool was designed for nickel-cadmium batteries (which have long since died, just as those bought for replacement have died). The disadvantages of Ni-Cd are well known: low capacity, short lifespan, high price. Therefore, cordless tool manufacturers have long since switched to lithium-ion batteries.

Well, what about those who have an old instrument? Yes, everything is very simple: throw away the Ni-Cd cans and replace them with Li-Ion of the popular 18650 format (marking indicates a diameter of 18 mm and a length of 65 mm).

Putting together a lithium-ion battery

Here are the new elements of Sanyo UR18650NSX (according to this article they can be found on Aliexpress) with a capacity of 2600 mAh. For comparison, the old battery had a capacity of only 1300 mAh, half the size. 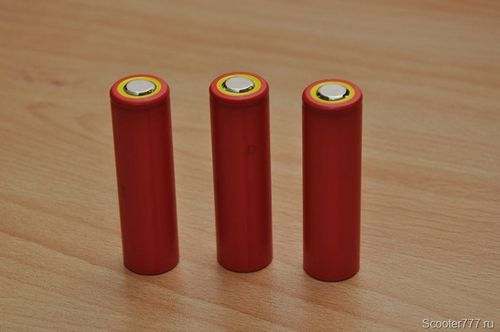 It is necessary to solder the wires to the elements. The wires must be taken with a cross section of at least 0.75 sq. Mm, because we will have considerable currents. A wire with this cross-section normally works with currents of more than 20 A at a voltage of 12 V. You can solder lithium-ion cans, short-term overheating will not harm them in any way, this has been verified. But you need a good fast-acting flux. I use TAGS glycerin flux. Half a second. And you’re done.

We solder the other ends of the wires to the board according to the diagram.

I always put even thicker wires of 1.5 mm2 on the battery contacts. Because the space allows. Before soldering them to the mating contacts, I put a piece of heat shrink tube on the board. It is necessary for additional isolation of the board from battery cells. Otherwise, the sharp edges of the solder can easily rub or puncture the thin film of the lithium-ion cell and cause a short. It is possible not to apply heat shrinkage, but at least something insulating to be laid between the board and the elements is absolutely necessary.

The contact part can be fixed in the battery case with a couple of droplets of super glue.

It’s good when the case is on the screws, but this is not my case, so I just glue the halves again “Moment”.

So, here is my 9.6V 1.3 Ah battery. At maximum charge level, it has a voltage of 10.8 volts. Lithium-ion cells have a nominal voltage of 3.6 volts, with a maximum voltage of 4.2. Therefore, to replace the old nickel-cadmium cells with lithium-ion ones, I need 3 cells, their operating voltage will be 10.8 volts, the maximum is 12.6 volts. Exceeding the rated voltage will not damage the motor in any way, it will not burn out, and with a larger difference, there is no need to worry.

READ  How To Replace The Battery In A Screwdriver Battery

Lithium-ion cells, as everyone has known for a long time, categorically do not like overcharging (voltage above 4.2 V) and excessive discharge (below 2.5 V). When the operating range is exceeded, the element degrades very quickly. Therefore, lithium-ion cells are always paired with an electronic board (BMS. Battery Management System), which controls the cell and monitors both the upper and lower voltage limits. This is a protection board that simply disconnects the can from the electrical circuit when the voltage goes out of the operating range. Therefore, in addition to the elements themselves, such a BMS board is required.

In a screwdriver, operating currents at high load reach 10-20 A. Therefore, you need to buy elements that are capable of delivering high currents. Personally, I successfully use Sony VTC4 30-amp 18650 cells (2100 mAh capacity) and 20-amp Sanyo UR18650NSX (2600 mAh capacity). They work fine in my screwdrivers. But, for example, Chinese TrustFire 2500 mAh and Japanese light green Panasonic NCR18650B 3400 mAh are not suitable, they are not designed for such currents. Therefore, there is no need to chase the capacity of the elements. Even 2100 mAh is more than enough; the main thing when choosing is not to miscalculate with the maximum permissible discharge current.

Likewise, the BMS board must be rated for high operating currents. I saw on Youtube how people assemble batteries on 5 or 10-ampere boards. I don’t know, personally, when I turned on the screwdriver, such boards immediately went into defense. In my opinion, this is a waste of money. I will say that Makita itself puts 30-ampere boards in its batteries. Therefore, I use 25 Amp BMS bought from Aliexpress. They cost about 6-7 and are searched for “BMS 25A”. Since you need a board for an assembly of 3 elements, you need to look for such a board, in the name of which there will be “3S”.

Another important point: some boards have different contacts for charging (designation “C”) and load (designation “P”). For example, the board can have three pins: “P-“, “P” and “C-“, as on the native Makitov lithium-ion board. Such a fee will not work for us. Charging and discharging (charge / discharge) must be done through one contact! That is, there should be 2 working contacts on the board: just “plus” and just “minus”. Because our old charger also only has two pins.

In general, as you might have guessed, with my experiments I threw out a lot of money both on the wrong elements and on the wrong boards, having made all the mistakes that could be made. But I got invaluable experience.

How to disassemble an old battery? There are batteries where the halves of the case are fastened with screws, but there are also glue ones. My batteries are one of the last ones, and I generally believed for a long time that they could not be disassembled. It turned out that it is possible if you have a hammer.

READ  How to Assemble a Makita Screwdriver Gear

In general, with the help of intense blows to the perimeter of the edge of the lower part of the case (a hammer with a nylon head, the battery must be held in the hand by weight), the gluing site is successfully disconnected. In this case, the case is not damaged in any way, I have already disassembled 4 pieces this way.

The part of interest to us.

Only contact plates are needed from the old circuit. They are permanently spot welded to the upper two elements. You can pick out the welding with a screwdriver or pliers, but you need to pick it as carefully as possible so as not to break the plastic.

Everything is almost ready for further work. By the way, I left the standard thermal sensor and disconnector, although they are no longer particularly relevant.

But it is very likely that the presence of these elements is necessary for the normal operation of a standard charger. Therefore, I highly recommend saving them.

Previously, the battery was controlled by the device itself. When the full level was reached, it stopped the process and signaled the completion of charging with a green indicator. But now the BMS circuit we have installed is engaged in level control and power off. Therefore, when charging is complete, the red LED on the charger will simply turn off.

If you have such an old device, you are in luck. Because everything is simple with him. The diode is on. Charging is in progress. Off. Charging complete, battery fully charged.

There is a small nuance here that you need to know. This charger is newer and is designed to charge a wider range of batteries from 7.2 to 14.4 V. The charging process on it proceeds as usual, the red LED is on:

But when the battery (which in the case of NiMH cells is supposed to have a maximum voltage of 10.8 V) reaches 12 volts (we have Li-Ion cells, whose maximum total voltage can be 12.6 V), the charger will blow the roof. Because he will not understand what kind of battery he is charging: either 9.6-volt, or 14.4-volt. And at this moment Makita DC1414 will enter error mode, alternately blinking red and green LED.

That is, you will miss some part of the capacity with this charger, but it seems to me that you can survive.

In total, the upgrade of the oBosch battery cost about 1000 rubles. Makitov’s new Makita PA09 costs twice as much. over, we ended up with twice the capacity, and further repair (in case of a slight failure) will consist only in replacing lithium-ion cells.

Attention: This article and the images in it are subject to copyright. Partial or complete reproduction on other resources without consent is prohibited.

How to choose a controller?

So, the screwdriver is being converted to lithium batteries. A regular charger is required for the device. When choosing a controller, keep in mind that the device must meet two parameters:

READ  Drain In Bosch Washer Does Not Work

With voltage everything is very clear: if the battery is 11.1 V, then the controller will be with the same voltage.

Rated operational current refers to the protection capacity of the board. Thus, a 4 A controller is designed for a current mark of 4 A, and with an indicator of 8 A, an additional load falls on it. In this case, the protective device will be triggered. All these technical data are stated in the passport of each controller modification. In this case, one modification can have a limiting current indicator of 30 A, and the other. 50 A. And both of these devices will formally be suitable for operation. Also, when creating a lithium battery, there is a limitation in size. Therefore, you should purchase a controller that fits in the case of an old battery.

Converting a screwdriver to lithium batteries makes sense. The advantage is that they have a high electrical density. As a result, by installing such a device in a screwdriver body, we can achieve an increase in the duration of the tool many times over. The charging current for high-power lithium batteries, especially in new versions, it can reach 1-2 C. You can recharge such a device in 1 hour, without overstating the parameters recommended by the manufacturer and without spoiling the quality of the product.

How to Determine the Choice of Lithium Cells?

Limiting factors should be outlined in order to make the selection of lithium-based cells. Currently, lithium devices are produced with a permissible load current of 20-25 A.

Pulse current values ​​(short, up to 1-2 seconds) reach 30-35 A. Battery configuration will not be violated.

Installing the protection board

This step can show how lightweight the lithium battery is. The weight of the Ni-Mh device was 536 g. The weight of the new lithium device is 199 g, which will be quite noticeable. We managed to win 337 g in weight. At the same time, an increase in energy capacity is observed.

The battery is mounted in the case. The voids are filled with soft material from the packaging.

The advantages of the second option

The second option is more suitable, because the voltage in the battery drops quite quickly from the maximum to the minimum (from 16.8 to 14.8 V). For an electric motor, which, in fact, is a screwdriver, an excess of 2.8 V is not a critical mark.

The lowest voltage indicator is for the 3S-Li-Ion modification. It is equal to 7.5 V, which is insufficient for the normal functioning of the electrical device. By installing four configurations, we will increase the electrical capacity of the battery.