Alteration of Atx For Screwdriver

When purchasing a cordless screwdriver, almost no one thinks about the battery life. Depending on the manufacturer and the cost of the tool, batteries can last 5 years and less than a year. This is especially true of an instrument from an anonymous manufacturer from China (and such an overwhelming majority on the market). Replacing the batteries with new ones is financially comparable to buying a new tool, so there is often a need to make a power supply for an 18V or 12V screwdriver yourself.

Regardless of what voltage the screwdriver is designed for, special requirements are imposed on the power supply: with a high load on the tool, for example, when twisting long screws into solid wood or in the drilling mode, the current consumption of the motor can increase up to ten amperes. If in idle mode the consumed current is no more than 1-2 A and a power supply unit with a power of 30-40 W is enough, then for normal operation a power of about 200 W is required.

Battery life is simple. The specifics of their work is such that they are capable of delivering large currents for a short time, restoring the operating voltage during downtime. The question arises: the charger for any screwdriver has a small weight and dimensions, why not use it as a voltage source? The answer is definitely not. The charger is designed to deliver low current for a long time, but we need high currents for a short time. Therefore, the external power supply must have a margin of power.

Home-made power supplies for screwdrivers can have various options for circuitry and design:

Now more about each of them.

The undoubted advantage of the built-in devices is that only the power cord of a small cross section remains from the external parts. Not everyone can make such a power supply on their own. A lot of experience is required here, since small-sized powerful power supplies can only be made using a pulsed circuit. A transformer of the required power of a classic design will not fit into the handle of a screwdriver, but with suitable dimensions it will have a power of several watts, which is enough only for idle operation.

READ  Makita Screwdriver For Home Which Is Better

Due to the fact that the power supply is located outside the body of the screwdriver, it is not subject to restrictions on dimensions and weight, so it can be made with the desired margin of power. The only limitation is the length and cross-sectional area of ​​the connecting cords between the tool and the power source, because, according to Ohm’s law, when the voltage decreases at the same power consumption, the current rises, so the low-voltage power cord should have a larger cross-section than the 220 V mains. Also a requirement to minimize the voltage drop across the wires. The thick cord has an increased mass and rigidity, which reduces the usability of the tool.

Switching power supplies are characterized by the fact that the step-down transformer in them operates at an increased frequency, as a result of which it has minimal dimensions at the same power. The overall dimensions of the device make it possible to place the structure in a standard case instead of faulty batteries. Of the minuses. The complexity of the design for self-repetition.

Power supplies on transformers have not yet lost their relevance due to ease of manufacture and reliability. The only drawback of such products is their large dimensions and weight, but this is not essential when the device is designed as a separate unit and installed permanently.

Devices on transformers have gained predominant distribution among improvised devices, so they will be considered in the most detailed way.

This device is characterized by the presence of the following components: 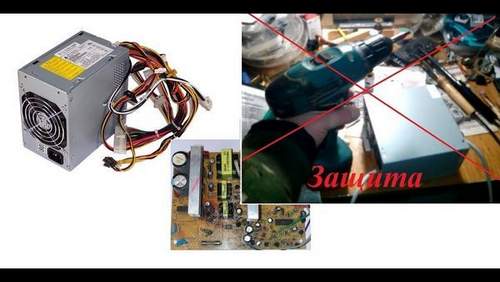 Power transformer is the most dimensional and heavy part of the device. It is designed to convert high input voltage to low voltage that meets the requirements of the connected load.

The rectifier’s task is to convert the alternating voltage to direct. Bridge rectification schemes consisting of four diodes or a monolithic rectifier bridge have the highest efficiency.

The filter smooths out the voltage ripple after the rectifier bridge.

READ  Alteration Of A 12v Screwdriver For Lithium Batteries 18650

Theoretically, these elements are enough for the work of a screwdriver, but voltage surges in the supply network, its drawdown due to increased load can lead to unstable operation of the engine, and an increase in excess of the norm can lead to failure.

The stabilizer’s task is to maintain a stable output voltage, regardless of the magnitude of the load and the voltage level of the supply network.

For self-assembly, you can recommend a simple proven stabilizer circuit, which is characterized by a minimum of parts and is available for repetition to anyone who knows how to hold a soldering iron in their hands and use measuring instruments.

In the above scheme, you can increase the capacitance of the capacitor to 1000-2000 μF, and transistors use types KT807, KT819 with any letter.

The main problem is the selection of a transformer with the required output voltage level. It should be slightly larger than what is required for the tool, since the part will remain on the elements of the stabilizer. For normal operation of the stabilizer, it is required that the rectified voltage exceed the stabilized voltage by several volts. Too much is impossible, since its excess will fall on the key transistor, heating it, and a low value in some cases will lead to a decrease in the output voltage.

Note! After the bridge rectifier and filter, the constant voltage value will exceed the input variable by about 1.4 times.

Thus, the power supply for a 12V screwdriver requires a transformer with an output voltage of 12-14 V AC.

Important! The transistor must be mounted on a cooling radiator.

To assemble a power supply for a screwdriver with a 12V engine do-it-yourself rationally from a computer power supply. Standard voltages of the motherboard and external computer devices are:

Standard power supplies are capable of delivering currents of up to 10-15 A in a 12 V circuit, which is absolutely acceptable for most screwdriver models. On the power connectors, the necessary voltage is present on the black (ground) and yellow wires. The remaining wires are not needed, and it is advisable to unsolder them directly on the power supply board so that they do not interfere and do not cause a short circuit.

In some cases, it is possible to use a computer power supply for a 14V screwdriver. True, there will be a slight drop in power. But screwdrivers for 16 and 18 volts will not work with such devices. If you have the qualifications, you can make changes to the standard power supply circuit to increase the voltage, but this is usually not possible for the average user.

Note! All of the above applies to obsolete, but still found AT power supplies. Modern ATX require some alterations for the possibility of inclusion, since it is organized on the computer motherboard with a special circuit.

With due care, this can be done independently. To do this, on the largest connector of the device you need to find a green wire. Closing it through the button to the black wire of the mass, you can turn on the power supply.

Using any source, you do not need to make any changes to the design of the tool. To supply voltage, you should use the housing from faulty batteries by drilling holes for the power wires in it. The conductors themselves must be neatly, without melting the plastic, soldered to the output terminals, strictly observing the polarity.

The assembled structure must be placed in a suitable housing and, if necessary, equipped with a carrying handle.

On the Internet, you can find recommendations for remaking ballasts of powerful fluorescent lamps (housekeepers) for use as a power supply for a screwdriver. But in few places it is said that such structures have galvanic connection with an alternating current network and it is unsafe to use them. Do not repeat such designs and be at risk of electric shock.

The design of an external source can serve as a temporary measure as a replacement for batteries, since mobility and network independence are the main advantages of battery devices. It is inconvenient when the power cord gets confused and interferes with work, especially in hard-to-reach places.