Each type of grinder has a different effect on the surface to be treated. But unlike the belt and eccentric, the angle grinder grinds the most aggressively.
Roughing operations are performed with small and large angle grinders with attached wire brushes. They remove scale, rust, old paintwork and slag crust from metal after welding, and they use sisal and polymer-abrasive brushes to brush wood.
Grinding with a change in the surface geometry, chamfering, and removal of sagging is performed with abrasive stripping and flap discs installed on an angle grinder. 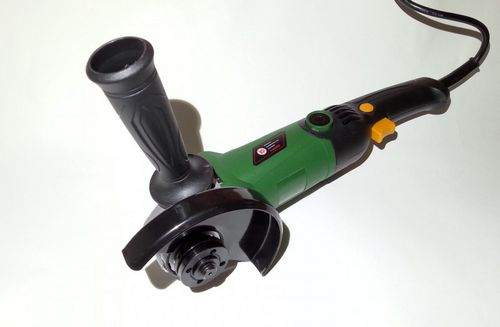 The angle grinder is supplied in a light box made of heavy corrugated cardboard:

The box contains the company logo, the appearance of the product, as well as some features of the model. The main performance characteristics are indicated from the end of the box:

Since Caliber is a Russian trade mark, the instruction is completely in Russian:

It should be noted that I conducted the tests in the country with a very mediocre electrical wiring. You can see how the voltage sags under load (sank to 210V), so with high-quality wiring, this grinder will consume more than 1.1kw. Be that as it may, for working with 125mm circles this power is enough for the eyes.

I have already mentioned earlier that it is necessary to periodically disassemble the tool and clean the main components from dirt / dust. It is also necessary to monitor the condition of the brushes and, if necessary, replace them. For this, a pair of spare brushes are supplied in the kit. Thanks to the successful design of the grinder, this operation will take very little time. No need to disassemble the entire case. It is enough just to unscrew the plastic clamping screws:

And finally, a couple of recommendations for work:
– use protective equipment (goggles, protective cover). Do not neglect the use of the side handle. The power of this model, although it is sufficient, is possible for the disc to jam under strong pressure.
– for prolonged use, let the tool cool down. If the work “burns”, then for a faster cooling just turn on the tool “idle” at increased (maximum) speed. Cool air blown by the fan will cool the tool much faster than a simple break in work
– do not operate at low speed for a long time. This model allows this, but it should not be abused.
– when working at low speed, do not turn off the tool immediately to avoid local overheating. Let it run for a while, preferably at higher revs.
– do not exceed the number of revolutions indicated on the disc to avoid injury
– do not work with a sander near containers with flammable liquids, as well as in “oiled” overalls. It is not uncommon for such clothing to catch fire from sparks.

A small demonstration of work:

Minuses:
– there is no function of maintaining the set speed depending on the pressure on the tool

Output: the tool is really high quality, no complaints about the work. Due to the sufficiently high engine power and the presence of a speed controller, this model allows you to solve most of the tasks. I definitely recommend buying.

As you know, nothing is eternal and even the tools of brand manufacturers break, not to mention the so-called “consumer goods”. And an angle grinder (angle grinder). Not an exception. By the way, they began to call the angle grinder “angle grinder” at the time of the Union, because then this tool was produced in Bulgaria and the first models were supplied from there. An angle grinder, as a tool, has become very widespread due to its versatility and ease of use. There are also many varieties and models of grinders, but the principle of operation and device is not fundamentally different. Therefore, having considered the device of the tool, possible malfunctions and repair methods, they can be applied to any model of an angle grinder.

Angle grinder device relatively simple. The basis of the tool is its body, inside which there is an electric motor, a starting device and a gear transmission to the spindle, on which various attachments are attached.

The body is made of strong impact-resistant plastic. Depending on the power, there are different dimensions and shapes of the tool. Some models have an angular speed regulator, which is designed to optimally select the speed for various types of work.
Another component could be a gearbox. The gearbox is designed to create optimal conditions for the transfer of rotation from the rotor of the electric motor to the cutting or grinding wheel. This reduces the number of revolutions on the output shaft of the gearbox. Correctly selected rotation speed and circle diameter. The key to the most efficient operation of the tool.

Button for replacing the working disk, when pressed, which locks the disk in a certain position, preventing it from scrolling when removed.

The overload clutch acts as a limiter in the event of a sudden reactive torque. On the other hand, when the disc is jammed in the material, the angle grinder itself begins to rotate abruptly, which can lead to injury to the worker. This clutch does not allow such rotation.

The electric motor consists of a stator and a rotor as standard. The stator is located in the guide lugs of the plastic housing of the angle grinder. On the back of the stator there is a special device called a brush mechanism. It contains copper-graphite brushes. Brushes are required to transfer voltage to the rotor through the manifold assembly.

The rotor is located inside the stator and is fixed in the housing in bearing assemblies, which are inserted directly into the tool housing. The front bearing assembly is usually made in a metal plate, or this plate can be made of an aluminum alloy.

The gear housing of the angle grinder is almost always made of aluminum alloy and has several threaded holes for attaching an additional handle. By screwing the handle into various holes, you can change the planes of location during operation.

When determining mechanical defects of an angle grinder, more attention should be paid to the condition of the plonitarka (large gear), shank (gear on the shaft) and bushings. Uneven wear of the teeth or shake shafts indicates immediate replacement of worn parts.

Breaking out the spindle lock button.

The reason is just one careless movement, namely pressing (deliberate or accidental) on a button when the disc is spinning. Sometimes breakdowns occur due to attempts to remove a jammed disc using a button. Many grinders have slots on the spindle where the disc is attached specifically for a regular open-end wrench, look at your angle grinder, most likely you have one too. So, it is better to use them and an open-end wrench than a disc lock button.

Failure of the electric motor.

This often happens with tools that work in dust and which are forced to rest in the sand or on the ground: the sucked-in dust grinds off the winding. However, it is possible to ditch the motor without dust. Strong overloads, especially if the tool is low-power. Therefore, in small Bulgarians, not only the anchor, but also the stator often burns out. Small grinders also have a breakdown of the electronic speed control unit. If you use an angle grinder to cut very dusty materials, in particular slate, a stocking put on in place of the ventilation slots in the housing helps to protect the tool.

Another sore spot of the Bulgarians (as well as other twisting power tools). Few machines stand out with strong immunities against dust, and high rpm suggests rapid wear. In general, bearings are not the worst failure, they are easy to change. However, it is important to make the replacement on time, otherwise there is a high probability of a more serious breakdown, the repair of which is comparable to the purchase.

If, when turned on, the disk starts to gain speed and accelerates too much, there is definitely a turn circuit on the stator winding. Repair of the stator is one of the most serious breakdowns and requires appropriate skills. If you are not confident in your abilities, then it is more expedient to entrust it to professionals or use the services of a repair shop.

We start repairing the stator of an angle grinder by cutting off the winding ends, the remnants of which we take out. Next, we make a new winding using a template sandwiched between two large plates on an axis, which can be inserted into an electric drill. The main thing is to achieve an identical number of turns, made with the proper density and withstand the thickness of the wire. We insert two coils into the stator case, we make conclusions from the same winding wire, insulating with flexible tubes of the appropriate diameter.

In models up to 1100 W, spur gears are usually used, mounted on an anchor, but an angle grinder with a higher power, for example, 1500 W, requires helical gear wheels. Both options are tapered, since the axis of the gearbox stem intersects with the armature shaft, and transmission is possible only by angular engagement of the teeth.
As a rule, repairing an angle grinder gearbox consists only of replacing the gears. If a disk gear wheel breaks down, then it will be very difficult to remove it for replacement, this unit is best fixed in the gearbox.

Almost all modern models of drills, jigsaws, screwdrivers have a speed controller. But not all angle grinders (grinders) are equipped with such a mechanism. In principle, a regulator is not needed for cutting metal with a cut-off stone, but for grinding it simply cannot be replaced. The proposed scheme of a homemade regulator is very simple and reliable. There are not many parts and they are not expensive. If you already have an angle grinder without a standard speed controller, you can easily upgrade it.

Can be assembled separately in a box with an outlet and used as a carrying case with a power regulator. Or you can immediately assemble the regulator in the angle grinder case and remove the resistor handle.

Typical malfunctions of grinders and methods of diagnostics and repair

The first thing to do. Disconnect physically from the network and manually rotate the disc. If the disc is not spinning or is spinning very tight. Immediately disassemble the instrument for visual inspection. If it turns easily, then the most likely. Electricity does not reach the brushes of the electric motor. That is, the problem lies either in the power plug, or in the wire itself, or in the button mechanism “Start”. It is enough to disassemble the case and “ring” cable with an ordinary tester, or in some other way, for the presence of a break. The angle grinder will start working after removing the open or replacing the wire.

The start button and power cord are functional, the angle grinder is not working.

Check brushes and brush holders. There may be a breakage or complete wear of the brushes. The resource of these devices is usually limited to a few years, of course, it all depends on the intensity of use. Eliminate open or replace brushes.