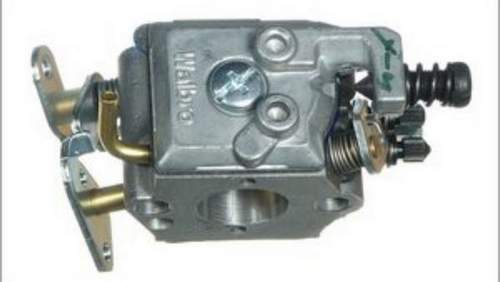 How to adjust the carburetor on a chainsaw with your own hands?

Owners of a summer cottage often have to perform work that requires a tool such as a chainsaw. However, over time, even he begins to cope worse with his functions and at some point may simply stall. This can happen due to various reasons, including the use of low-quality fuel or the presence of problems in the engine. This issue, of course, is important, but for us the carburetor, which is an important element of the engine, is of most interest. In order for the engine to work normally as long as possible, you need to know at what points the carburetor of the chainsaw should be adjusted and how this operation should be carried out.

Even before you start adjusting the carburetor, it will be useful to familiarize yourself with the device and the principle of operation of this tool. Subsequently, this information will help prevent many problems.

The carburetor design can be distinguished number of required elements, however, some modifications to this tool may include additional ones. Therefore, you need to look at the chainsaw model. These elements are:

The carburetor itself works as follows: The air duct provides a quick airflow that can have a different speed depending on the position of the damper. The level of the float allows you to adjust the degree of opening of the fuel supply channel, and it depends on the position of the aforementioned air damper. When air enters the diffuser, it begins to lift the incoming fuel with it and sprays it. At this stage, the formation of a mixture occurs, which goes into the cylinder, bypassing the inlet pipe.

As a rule, the pressure level in the float chamber does not differ from atmospheric pressure. In the air channel, a different picture is observed, since there is maintained a discharged pressure. It is the difference in fuel pressure that ensures its flow through suction through the nozzle, from where it goes into the air channel. It is very important that with an increase in the degree of opening of the air damper the amount of air also increases, which, accordingly, allows more fuel to be supplied. In turn, it is the amount of fuel that affects what speed the engine will operate at.

Most often, the owners of the Huskvarn chainsaw and other manufacturers do not so often have to adjust the carburetor. To understand that it’s time to perform this operation, you must focus on the following signs:

It should be noted that adjustment failure is a fairly rare occurrence, however, it can occur in the following situations:

Typically, to adjust the carburetor of a Goodluck chainsaw and other manufacturers, two screws are used. L and H, which allow you to create a fuel mixture of the required quality. If a lean mixture is needed, the screws must be rotated clockwise, resulting in an increase in the number of revolutions. In other words, the purpose of the operation is to set high speed. If you turn the screws counterclockwise, this will allow you to achieve a more saturated mixture. Accordingly, this operation allows you to configure a low number of engine revolutions.

Regardless of which tool you have to deal with, the carburetor adjustment requires fulfillment of some requirements:

In the process of adjusting the carburetor, there is a risk of harming your health. Therefore, in order to minimize such unpleasant consequences, you must make sure that the chain is directed in the opposite direction. In turn, the saw must be placed on a flat surface and make sure that it does not come into contact with the cutting part with any objects.

The process of fine adjustment of the screws requires a certain order: L. H. T. The L screw is used to select the maximum number of engine revolutions. This is done by turning the screw clockwise or in the opposite direction until the maximum is reached.

See also  How To Make A Chainsaw Tiller

Considering that everything is done according to the “sensation”, a tachometer or a clear musical ear will not hurt here. It is very important that you clearly imagine what kind of sound the engine rpm has. Then you can stop in time. First of all, you need to be careful with the regulator H, because otherwise it may result in engine failure. And to repair it, you have to spend a large amount of money. For this reason, it is desirable that a qualified specialist perform similar work.

If you were able to get hold of the tachometer and you know what the maximum number of revolutions your engine has, then you can try to independently adjust the carburetor. The process itself involves performing the following actions:

In conclusion, we need to perform the operation on setting idle. First, you need to ensure that the engine runs uniformly in any position until it starts to move. The adjusting screw must be turned counterclockwise until the chain stops. If you fail to do this, you should entrust this work to a specialist, since it is dangerous for your health to use a chainsaw with a broken adjustment.

A tool such as a chainsaw is noticeable simplifies many operations. However, it can at some point fail. One of the reasons for this may be a carb adjustment failure. But any owner can independently solve this problem. In principle, do-it-yourself adjustment of a chainsaw is a fairly simple procedure, since it requires manipulation with three adjustment screws. However, experience will not be superfluous here, therefore it is recommended not to conduct experiments with the working tool, but to invite a specialist.