Along with the engine, the carburetor is one of the most important elements of the tiller, the main function of which is to enrich the fuel with air and supply the finished mixture to the engine of the unit. From time to time, the carburetor of an agricultural machine requires adjustment that will help reduce the amount of fuel consumed and increase the power of the tiller. It is not difficult to set up a carburetor, however, before working, you should prepare and study the sequence of actions when performing this procedure.

Tiller carburetor device. We study the mechanism from the inside

The carburetor for the tiller has a fairly simple design. Nevertheless, it should be studied, since in the future this will allow for timely adjustment and independent repair of the unit.

The device of the carburetor available in the tiller consists of the following elements: 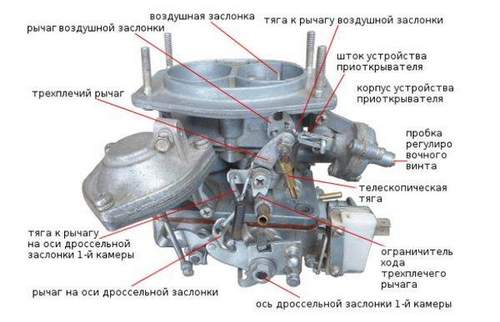 Between the float and mixing chambers is a spray gun that distributes gasoline to the mixing chamber. There, the fuel is mixed in the air, which, in turn, enters the carburetor through the inlet pipe. The amount of fuel available inside the float chamber is always a few millimeters below the level of the position of the outlet. This is necessary so that when the tiller engine is off, fuel does not spill out of the float chamber. This is especially necessary in cases where the tiller is located on a slope.

There are a number of signs that indicate the need to adjust the built-in carburetor of the tiller.

There can be several reasons for all these malfunctions. Among them. The use of a tiller with excessive loads on its mechanisms, as well as a long simple unit without practical application. In any case, timely adjustment of the carburetor of the used agricultural machine will help to solve these problems.

Setting up a carburetor for an agricultural machine by itself is quite simple. Before adjusting, you will need to start the engine and let it run for 5 minutes. After that, you need to directly adjust the carburetor on the tiller.

The procedure is performed in the following sequence:

After setting up the tiller carburetor with your own hands, you need to check the operation of the unit. If the engine started to run smoothly and consume less fuel, it means that the carburetor was adjusted correctly.

Cleaning the tiller carburetor. How to remove blockages yourself?

As a result of the intensive operation of the tiller over time, a large amount of dust and the products of evaporation of the fuel mixture accumulate in its carburetor. This adversely affects the efficiency of the mechanism, and in order to correct the situation, it will be necessary to thoroughly clean the carburetor.

This procedure is performed in the following order:

The methods described above for setting up and cleaning carburetors are suitable for owners of killers from the brands Pchelka, Agro, MTZ, Kaskad, Neva MB-1 and MB-2, as well as other units equipped with K-45 and KMB-5 carburetors.