Lawn mower (lawn mower) contains a base. A body made of aluminum, in which the rest of the parts are placed, working harmoniously as a whole. The carburetor body has a diffuser. A stroke with internal channels through which air is pumped. 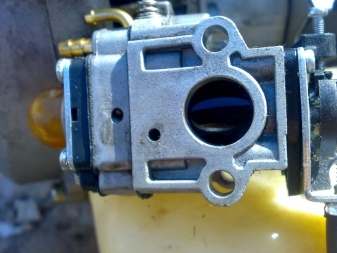 Channels branching off from the diffuser stroke deliver fuel, with which the forced air mixes, entraining gasoline vapors. Outside the main carburetor compartment are located:

The latter forms the very explosive mixture ignited in the carburetor combustion chamber.

Deposits can build up in the adjustment compartment. The needle does not completely close the hole, and a lot of gasoline enters the fuel chamber. The engine overflows it, possibly fills the spark plugs. Because of this, the gasoline-air mixture contains an increased amount of gasoline vapors. Efficiency drops noticeably.

Primer. A mini-hand pump for forced pumping of fuel into the carburetor. To successfully start the engine, you may need to pump 20 ml of gasoline manually.

The membrane often deforms (sometimes breaks) due to the continuous operation of the lawn mower or trimmer for several hours. If you abuse this “shock” mode of operation, membrane damage occurs more often. New breakdowns will fall like a horn of plenty:

How to adjust the carburetor of lawn mowers?

A lawn mower or trimmer, despite its relative simplicity (compared to a car engine), sooner or later fails. There comes a time when long downtime and restarts of the gasoline unit cannot be avoided. Maintenance is needed. In advanced cases, repair is required, or rather, replacement of worn-out parts with the same new ones. Until you are faced with the need to replace your worn-out parts, carburetor maintenance is required. Cleaning, washing, reconfiguring mechanisms.

The fact that the adjustment is too coarse (it is not possible to accurately set the parameters) are to blame for the springs on the adjusting screws. The lawn mower or trimmer manufacturer may supply excessively thick and stiff springs. You can find others either in workshops where similar equipment is repaired, or purchased from any dealer or official representative of the company that produced the motor for your trimmer or power scythe.

Situations in which adjustment is necessary

New chainsaws are supplied from the manufacturer with pre-adjusted carburetors. This is called standard adjustment. But for the normal running process, it is required to lower the maximum engine speed, adjust the carburetor. After running in, the chainsaw needs fine tuning to achieve maximum engine efficiency.

Also, a signal for cleaning and adjustment is an increased fuel consumption, which negatively affects the operation of the exhaust system. Simply put, the chainsaw begins to smoke heavily and the muffler becomes clogged with carbon deposits, which in turn will lead to a decrease in power. With a lack of fuel in the mixture, engine parts are poorly lubricated, and premature wear occurs. Also, a poor-quality mixture can cause the engine to jam due to overheating (this is one of the reasons why the chainsaw will not start).

Adjustment is necessary when the engine does not idle, stalls or does not develop full power.

If the carburetor of the chainsaw is not adjusted and it is not possible to start the chainsaw, then the adjustment begins by setting the screws (L) and (H) to the standard setting. This is 1/5 turn of the screws until they are completely tightened. After that, you need to start the engine, let it run a little and warm up. The next step is to adjust the low speed mode. Optimum low engine performance can be achieved by adjusting the screw (L) and idle (T). To do this, first the screw (L) is tightened until the maximum engine speed is obtained, then it is released by 1/4, and the idle speed is normalized with the screw (T).

See also  How To Use A Lawn Mower

After adjusting the work on the “bottom”, the thrust and maximum engine speed are adjusted. To do this, slowly tighten the screw (H) and check the speed according to the readings of the electronic tachometer.

An important step is to check the saw in all operating modes after adjusting it, for this you need to let the chainsaw cool down, and then start it according to the cold tool start algorithm. If the saw starts up normally and runs smoothly at idle speed, you need to check how it cuts. If in the process of checking deficiencies in the power of the chainsaw are found, then it is necessary to repeat the adjustment of the screw (H) by unscrewing it and checking the thrust in operation.

How the carburetor is adjusted

The chainsaw setting algorithm is quite simple and consists of the following steps:

Now let’s look at how the correct adjustment of the chainsaw carburetor goes in more detail. Almost all carburetor models have three adjusting screws. The screw (T) is responsible for fine tuning in idle mode. Screw (H) setting for maximum speed. The screw (L) controls the mixture formation at low rpm. By tightening the screws (L) and (H), the fuel supply and the mixture becomes leaner, respectively, the speed increases.

How to properly adjust the carburetor of a chainsaw

A chainsaw is a technically complex tool that needs to be serviced from time to time. Cleaning, replacing filters and, of course, adjusting the carburetor of the chainsaw will help to serve its entire life. In this article, we will consider the issue of tuning the carburetor. How and why it is carried out.

Correct adjustment of the chainsaw carburetor should be carried out using a special tool. A tachometer. It allows you to most accurately determine the maximum number of engine revolutions and adjust them according to the manufacturer’s requirements. You need a small slotted screwdriver for adjustment. For some models of chainsaws, you will need a special adjusting key, without which work cannot be carried out.

The key for adjusting some models of carburetors is available only in service centers authorized for the repair of chainsaws by the manufacturer. This measure is aimed at reducing breakdowns due to incorrect settings by inexperienced users and those who are engaged in repairs without official permission to do so.

Adjusting the carburetor of a Chinese chainsaw

Carburettors installed on Chinese-made saws are made similarly to European ones and have the same adjustment screws.

The carburetor of a Chinese chainsaw is adjusted according to the algorithm presented above, and differs in that during the initial adjustment of the screws (L) and (H), they must be turned out two turns. Further, the carburetors of the Chinese saw are adjusted in the same way as the European ones.