How to start the Stihl chainsaw correctly: instructions

The tool manufacturer has taken all measures and developed a manual that makes the mechanism easy to start. The user will protect himself from injury if he fulfills the proposed frequency of actions:

In case of bearing defects, a slight backlash is felt. To detect it, the flywheel of the Stihl MS 180 saw is swinging from one side to the other. The movement indicates that the flywheel is being moved towards the electrodes by its own magnets, as a result of which there is no spark. To remove the mechanism, dismantle the cutting element, remove the filter and clutch cover. For the crankshaft stopper, remove the manual starter cover and tighten the two bolts.

The clutch is unscrewed with a wrench clockwise. Remove the drum with an asterisk, change the old clutch and tighten it all the way. The crankshaft is locked so as not to break the starter. The mechanism is assembled in the reverse order. To tighten, the brake handle is tilted forward, the tool is turned on, then released from the brake. 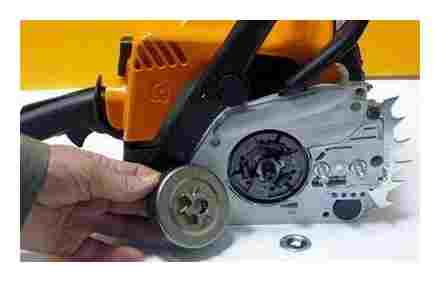 Bearings with defects are less often detected (the diameter of the holes in the cage is increased). For determination, disassemble and measure with a micrometer. Broken bearings are indicated by regular knocking. In this case, urgent repair is required, since if the integrity of the crankshaft is violated, the piston group and the cylinder will fail.

The module or coil cannot be disassembled and its suitability is difficult to determine without testing devices. Modern ignition systems are durable, lightweight and small in size. They are characterized by near-fail-safe functionality. Problems with chainsaw malfunction due to the ignition coil can be eliminated by yourself.

Lead wires are tested for damage (including internal ones) that arise from vibration that leads to friction. If no cracks are found, then replacement of the ignition coil is required. Sometimes a weak, subtle flash when the saw heats up indicates a malfunction of the module. This is due to an increase in the temperature of the coil, which leads to an increase in the resistance of the transistor.

The peculiarity is that at the beginning of work, a spark may appear, but after prolonged use it becomes dull and disappears. Modern ignition coils in a home workshop are not repaired, therefore they are replaced with suitable elements.

Before commissioning, the tool is maintained. In order for the idle speed adjustment to be effective, prevention is done:

To adjust the operation of the mechanism at idle speed, an appropriate adjusting screw is used. Its rotation depends on the required setting:

It will not be possible to adjust the idle operation if there is air suction into the engine through a gasket, acceleration pump, oil seals, or for another reason.

The tool quickly reaches its maximum number of revolutions and the power does not decrease. This situation is explained by the fact that:

Why does my chain keep spinning at idle? How to fix it and how it works. 🤔

Gasoline engines are equipped with an ignition system that ignites the fuel. The timing of the flash will affect the performance of the motor. In mass production at the factory, the ignition of the chainsaw is not adjusted. Marks are placed on the corresponding rotating elements, which are aligned during adjustment. Incorrect adjustment leads to the fact that the mechanism starts and stalls.

If the cables are intact, then check the ignition coil. This is done with a special tester to ring the device. In this case, the indicators on the device must coincide with the technical characteristics of the coil, which are prescribed in the instructions for use. If inconsistencies are found, then the ignition unit changes to a workable device.

The video shows how to quickly set the gap between the ignition coil and the magnet using a piece of plastic cut from a bottle as a probe. You can also use a four-fold A4 sheet or a piece of cardboard from a cigarette pack.

The coil can be damaged by vibration if dropped or bumped, so work with caution.

Sometimes the engine will stall after normal operation. To establish the cause, pay attention to the accompanying circumstances:

Spark plug test is performed. The functioning of an element is influenced by various factors. When testing the mechanism, the reasons are revealed:

Chainsaw won’t idle? Hard to start when warm? WATCH THIS!

Due to work in such conditions, carbon deposits accumulate on the plug contacts. Subsequent corrosion of the conductors causes no spark in half of the fault cases. This is because the gap between the modular contacts changes. To test the spark, do the following:

If a bright spark resembling lightning appears between the electrodes during start-up, then the ignition unit is working properly. In the absence of a flash, clean the entire element and expose a gap between the conductors. Sometimes there is no clearance between the flywheel and the ignition coil. When rubbing the flywheel, scratches are visible on its exterior.

Adjusting the carburetor on your own on a chainsaw

Chainsaw carburetor adjustment ensures efficient operation of the tool at a workable power version with economical fuel consumption. Adjustments must be made with clean fuel and air filters. For a larger number of carburetors, adjustment is carried out with 3 screws: for high and low speed and idle speed adjustment.

The designation H refers to the high speed screw that controls the main jet, L. the low speed screw controls the idle jet. The S screw is used to fine-tune the idle speed. When, to simplify options, the number of available carburetor adjusting screws is reduced.

Chainsaw carburetor setting is divided into two steps. basic (factory options), carried out with the engine turned off. and the final one, produced on a running warm engine. A clear value for the angles of rotation should be taken from the operating instructions for the particular chainsaw. Failure to follow the manufacturer’s annotations will result in damage to the motor.

The adjusting screws for the highest H and low L turns are slowly turned clockwise in full, then unscrewed 2 turns, other options are also possible

If there is not enough air-mixed fuel, the engine will run on a lean mixture and will either not run or potentially be damaged (in a two-stroke engine, fuel also provides lubrication to the engine). If too much fuel is mixed with the air, the engine “runs rich” and either won’t run (it floods), runs with a lot of smoke, runs poorly (withers, stalls easily), or at least waste fuel. The carburetor is responsible for preparing the mixture.

A chainsaw carburetor is simpler than most carburettors because it actually only has three situations that it has to cover:

No one who works with a chainsaw is interested in any gradation between idle and full throttle, so increasing performance between these two extremes is not very important. Many gradations are important in a car, so a car carburetor is much more complicated.

The chain saw carburetor can be seen in the following two photos:

This short video (5.1 MB) gives you a quick overview of the carburetor.

Here are the carburetor details:

Watch the video to get a better look at these parts.

The carburetor is operating “normally” at wide open throttle. In this case, the throttle valve is parallel to the length of the tube, allowing maximum air flow through the carburetor. The air flow creates a good vacuum in the venturi, and this vacuum sucks the metered amount of fuel through the orifice. You can see a couple of screws in the upper right corner of the carb on one of these screws (marked “Hi” on the chain saw body) regulates how much fuel enters the venturi when the throttle is fully open.

When the engine is cold and you try to start it with the cable, the engine runs at very low rpms. Plus it’s cold, so you need a very rich mixture to start with. This is where the throttle valve comes in handy.

See also  How to Change Swap On A Chainsaw

It contains the elements that help the engine run. Any of these elements can have their own complexities that can affect the performance of your chainsaw. For example, the rewind spring may not work properly, making it difficult for the starter rope to rewind onto the pulley.

Adjusting the carburetor on a husqvarna chainsaw

The reason for the sudden stop of the chainsaw may be incorrect adjustment of this device. There are 3 special screws on the carburetor of your Shtil361. The first of them is designated H (with its help the maximum speed is set), the second. L (regulates the idle speed) and the third S or LA (idle speed). Before starting, unscrew the third screw counterclockwise 1-1.5 turns and start the saw. If the engine does not stall, then look at the chain: it should remain stationary. If not, turn the screw in the opposite direction until the chain stops. If, when the accelerator is pressed, the saw picks up speed too slowly, then this can be adjusted with the engine running with the screw L.

How to set up and adjust the chainsaw carburetor: https://diz-cafe.com/tech/regulirovka-karbyuratora-benzopily.html

Check the adjustments and adjust if necessary

Refit both parts and carry out functional check of the chainsaw. If it still stalls at idle, go to the next step.

How to choose a tire and chain for a chainsaw

Chainsaw won’t start. Causes and ways to eliminate them