One of the most important components of a chainsaw is a clutch or clutch mechanism. When using the tool, this part may fail, which will entail the inability to carry out work on sawing wood. If the clutch mechanism is out of order, the question immediately arises of how to remove the clutch on a chainsaw. This need arises when you need to repair or replace the device. How to do this is described in the material.

Design and principle of operation of the chainsaw clutch mechanism

Modern chainsaws are equipped with centrifugal clutch mechanisms. Centrifugal clutch. This means that its performance depends on the torque of the engine. The main purpose of the clutch on a chainsaw is to ensure the transmission of torque from the crankshaft of the engine to the saw headset (chain). The device works in automatic mode, and how this happens, we find out in detail.

The clutch mechanism consists of the following structural elements: 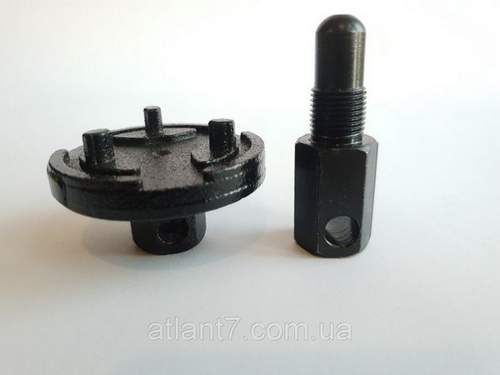 Now about the principle of operation of the chainsaw clutch. When the two-stroke engine of the tool starts, the crankshaft begins to rotate. A coupling is attached to the shaft, to which a chain is connected with an asterisk. When the chainsaw is idling (shaft speed up to 2700 rpm), that is, the accelerator trigger is not pulled, the spring presses the friction linings, as a result of which the torque is not transmitted to the drum.

As soon as the sawyer picks up the tool and starts to increase the speed (maximum up to 14000 rpm), the chain begins to move along the tire. This happens due to the fact that the rotation speed of the crankshaft increases. Due to the inertia force, the friction pads (also called counterweights) are moved and mesh with the inner walls of the drum. As a result, the drum moves, which is connected to the sprocket. A spinning sprocket drives a chain.

When clutch replacement is needed

Removing and replacing the clutch of the chainsaw is carried out in case of detection of a malfunction of the mechanism. These malfunctions include:

The service life of the clutch mechanism depends not only on the quality of the components, but also on the correct operation of the tool. In order to extend the clutch chainsaw service life, you must pay attention to signs that reduce the resource. These signs include:

Determining the malfunction of the device is quite simple. To do this, cut the workpiece. If during the sawing process the chain rotational speed decreases or stops when the load increases, then it is time to check the clutch. How to remove and replace the clutch on a chainsaw, we will consider in detail in the next section.

Not many sawers know how to remove the clutch on a chainsaw. The design of the mechanisms on different models of chainsaws is different, but the principle of operation is the same everywhere. The dismantling procedure is also almost identical, therefore, we will further consider how to unscrew the coupling on a chainsaw with an internal sprocket arrangement.

Initially, you will need to prepare the necessary tools:

If dismantling is carried out for the purpose of replacement, then accordingly it will be necessary to prepare a new mechanism in advance. When buying a new coupling, you only need to know the exact brand of the chainsaw, since the devices differ in outer diameter, thread and design of the working mechanism. The instruction on how to remove the clutch on a chainsaw is as follows:

The procedure is not difficult at all, and does not take much time. Assembly is performed in the reverse order of removal. In order to avoid any malfunctions, it is recommended to install a completely identical clutch on the appropriate tool model.

Surely you noticed that chainsaws can have different designs of transmission devices. Above is an instruction for removing the clutch with a drum on which the sprocket is on the inside. Such a device is available in most chainsaws, but not on Stihl tools. Chainsaws of a well-known manufacturer are equipped with a drum, which has an asterisk on the outside. It looks like this, as shown in the photo below.

Another arrangement of the sprocket does not mean at all that the tool is equipped with a different clutch mechanism. However, this suggests that the principle of removing the clutch is different from the above instructions. Therefore, we will find out how to remove the coupling on the Stihl, Dolmar and other chainsaws, on which the sprocket is located on the outside.

Installing a new or repaired part is performed in the reverse order of removal. The procedure is almost identical with the first option, with the exception of some features. If you need to replace only a drum or an asterisk, then you will not need to dismantle the clutch, in contrast to the version with an internal star arrangement.

See also  How to Clutch a Clutch On a Chainsaw

Do not rush to change the whole mechanism, since the clutch malfunction can be eliminated by replacing the defective part. Most often, the cause of the malfunction is a spring, which stretches and can be damaged. An already extended spring is defective. If the spring has damaged, it can be replaced to restore the tool to working. The replacement instruction depends on the design of the mechanism, since the compression devices are of different types, but all of them must be replaced. This procedure is not so much complicated as it requires special care and adherence to a sequence of actions. How to replace the spring on the clutch of a chainsaw is shown in detail in the clip.

If the friction pad is damaged, this part can also be replaced. Replacement of the part is also necessary in case of wear of the threaded connection, which happens with frequent removal and installation of the coupling in place. To understand the cause of the malfunction of the part, you will first need to make a visual inspection. If the teeth of the sprocket are worn, then it should be replaced. Fixed stars must be changed with the drum.

If you have heard that the clutch on the chainsaw needs to be adjusted, then the question probably arises, how to do this? On a chainsaw, the coupling does not need to be adjusted, since it works in automatic mode, unlike devices of old brands of tools. It is impossible to regulate the compression force of the spring or springs, and if this part is damaged, it should be replaced.

When installing the chainsaw clutch in place, it also does not require any adjustment. The coupling is tightened with a special key and a locked piston in the cylinder. On some models of chainsaws there is a washer or spacer bar. It may be between the shaft and the sprocket, or the drum and the sprocket. This washer adjusts the alignment of the sprocket with the tire. If there is such a washer on a chainsaw, then it must be put in its place when carrying out repairs or replacing the mechanism.

How the clutch mechanism on Ural and Druzhba brand chainsaws is removed and adjusted is shown in detail in the clip.

To summarize, it should be noted that clutch on a chainsaw plays an important role. This mechanism not only provides the transmission of torque from the engine to the circuit, but also protects the motor from premature failure. Imagine a situation where the sprocket is rigidly connected to the crankshaft. When the chain seizes in the material being cut, the engine parts, sprockets and chains will wear out simultaneously. Understanding the purpose and principle of operation of the mechanism, it is always necessary to monitor its serviceability, and at the first sign of failure to carry out removal, repair or even replacement.