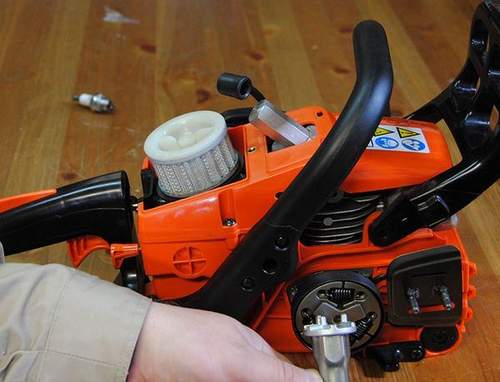 1) Fault Chainsaws: The chain rotates almost constantly (the engine, at the same time, may not work stably).Causes Faults: Clutch spring burst.Repairs do-it-yourself chainsaws: Replace a burst clutch spring with a new one (for details, see “How to remove the chainsaw clutch” below). Husqvarna chainsaws have one clutch spring and two weights, Stihl chainsaws have three clutch springs and three weights (cam, sectors). If you cannot find the clutch spring itself, you will have to change the entire clutch.

2) Fault Chainsaws: The chain spins almost constantly, sometimes extraneous sounds are heard in the clutch.Causes malfunctions: The braid of the clutch cam broke off (due to overheating) and the clutch spring flew off. Blue clutch cams indicate overheating. Overheating even before the clutch breaks can occur if you work with a chainsaw with a chain brake or a dumb chain.Repairs Do-it-yourself chainsaws: Replace the clutch assembly (for details, see “How to Remove the Chainsaw Clutch” below).

See also  In what position to store the chain saw

How to remove the clutch of a chainsaw.

2. Then it is necessary to stop the crankshaft so that it does not rotate when the clutch is loosened. To lock the crankshaft, for example, with a large wrench, remove the manual starter cover and screw two bolts into the ignition rotor. Or unscrew the spark plug, lower the piston into the BDC and lock it there by pushing the rope into the spark plug hole.

See also  How to Install a Chain on an Electric Saw

4. Then remove the drum with the drive sprocket from the chainsaw. Chainsaw clutch drum is replaced according to the rule: replaced two tires. Replace one drum.

5. Then put on a new clutch and tighten it by hand until it stops (it twists counterclockwise). In this case, the crankshaft must be locked again so that the clutch does not break the starter located on the other end of the chainsaw crankshaft.

6. Then everything is going in the reverse order of disassembly.

7. To tighten the clutch on the chainsaw completely, you must forward the chain brake handle forward, start the chainsaw and then remove it from the brake.

The principle of operation of a centrifugal automatic clutch chainsaw.

When the chainsaw is idling, the clutch loads, although they rotate with the crankshaft, do not touch the clutch drum (popularly, the clutch cups) as they are pulled by a spring and, accordingly, do not transmit torque from the engine to the saw set.When the engine speed reaches 4000 rpm, the clutch weights under the influence of centrifugal force are unclenched and abutting their external friction surface against the inner surface of the clutch drum, they begin to rotate, thereby transmitting torque from the engine to the saw set.When the chain abruptly stops during operation (for example, it is jammed), the clutch will not allow the engine to stall, since friction loads at high speeds will slip in the drum, and at speeds below 4000 the spring will compress the loads.