Even professional chainsaws from world famous manufacturers break down. no one is immune from this. The question is how often breakdowns occur and how serious they are. It is one thing when you need to sharpen the chain or replace the drive sprocket, and another thing if the chainsaw does not start or fires at the carburetor. In fact, most of the faults can be easily eliminated with your own hands, for example, when the chainsaw does not lubricate the chain or stalls.

The power unit of all chainsaws is a single-cylinder internal combustion engine. For devices of this type, such malfunctions are characteristic as a violation of the inside of the cylinder compression, a change in the ratio of the fuel mixture, incorrect operation of the ignition, and poor-quality fuels and lubricants. The main problems in the operation of the power unit are as follows:

Abnormal idling can be caused by various reasons. They can be divided into several positions:

Repair should start with an external inspection and checking the presence of fuel in the tank.

The engine may run intermittently or stall if there is insufficient fuel or air. Causes. clogged air or fuel filter. To check the fuel filter, it is necessary to remove the fuel line hose from the carburetor fitting and direct it into a container. Then press the fuel pump several times. If the fuel is pumped normally, in clearly defined doses, without dirt, then the fuel filter is in good working order. If the jet is weak or the fuel is not pumped at all, the filter must be replaced or, if possible, cleaned.

Clogging of the fuel filter with sawdust is one of the reasons for the breakdown of the chainsaw.

The device must be removed from the fuel tank (after draining all fuel from it). On most models, the fuel filter can be hooked out of the wire through the neck. If the filter design is collapsible and can be cleaned, it must be disassembled and washed in accordance with the manufacturer’s recommendations. Otherwise, change to a new filter.

Similar problems can arise when the air filter is clogged with dust, sawdust, or dirt. If the amount of air is insufficient, the fuel mixture will be enriched, the fuel combustion process is hampered.

To check, remove the filter. When working, you need to take precautions so that dust does not get into the carburetor. The device must be cleaned and rinsed in warm water with the addition of detergent. After drying, if possible, blow out with compressed air of low pressure, reinstall. If the chainsaw works fine, then the cause has been eliminated, if not, you need to look further.

READ  The calm does not develop the speed of the chainsaw

With continuous operation of the tool, it is recommended to replace the filters of the fuel and air systems after 3 months.

In situations where the chainsaw stalls at idle, it is required to inspect the condition of the muffler. If the part is dirty, exhaust gases are poorly discharged, the engine cannot continue to work, it stops. 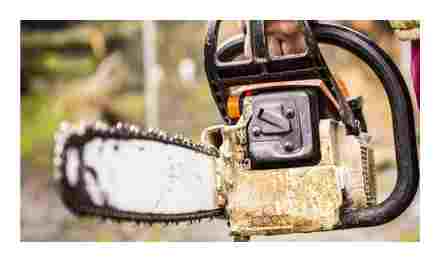 The saw stalls at idle speed and in cases where the carburetor is incorrectly set. For beginners, it is better to entrust the repair to specialists, as there is the possibility of incorrect settings, due to which the tool will not be able to work. A tachometer is required to adjust the carburetor.

Why does the chain fly off the tire? There may be several reasons and they are all different:

If the chainsaw does not start well when hot, you should begin the inspection of the tool with the spark plug. You will also need to check the spark on the candle.

For the device to work properly, the candle must be dry. When it is wet, there are no sparks on the contacts. You can try to replace the part with a new one.

If there is a spark and the plug is good, try looking for the problem in the fuel system. If during visual inspection it was not possible to find the cause of the breakdown, the carburetor should be removed. If the amount of fuel is exceeded, the device will not work. In this case, the candle must be wet. Turn the spark plug hole down. If the fuel mixture pours out, the reason why the chainsaw does not start hot is excess fuel.

In some cases, the owners of chainsaws have to solve more complex problems to fully restore the functionality of their cutting tool.

For the final tuning of the chain saw carburetor, we check the engine for acceleration and maximum rpm.

The engine may run intermittently or stall if there is insufficient fuel or air. Causes. clogged air or fuel filter. To check the fuel filter, it is necessary to remove the fuel line hose from the carburetor fitting and direct it into a container. Then press the fuel pump several times. If the fuel is pumped normally, in clearly defined doses, without dirt, then the fuel filter is in good working order. If the jet is weak or the fuel is not pumped at all, the filter must be replaced or, if possible, cleaned.

Clogging of the fuel filter with sawdust is one of the reasons for the breakdown of the chainsaw.

Malfunction of other systems

In some cases, users of chainsaws note other problems that do not significantly affect the operation of the tool.

It does not work stably, does not lend itself to adjustment. my first channel:.

How to check and replace the fuel filter

To check the current condition of the fuel filter, you must perform the following steps:

If the gasoline comes unevenly and jerkily, then it’s time to put in a new filter element. This is done quite simply:

Fuel system malfunctions are also quite often the main reason that prevents a chainsaw from working as efficiently as possible. First of all, you need to check the quality of the fuel mixture.

Some owners prefer to use a non-recommended brand of gasoline, but alcohol-based solutions or add more oil than is required.

Checking and repairing the carburetor

The principle of operation of the chainsaw carburetor.

If checking the ignition system, fuel filters, muffler did not give tangible results, the tool still does not want to work normally at minimum speed, you need to check the carburetor.

Heading for service at the service station

The use of poor quality fuel can also lead to serious engine damage. These can be not only problems with the fuel filter, but also general contamination of the injection system.

It should be said that such a breakdown can only be determined after computer diagnostics. Such diagnostics will allow to identify the existing problems with the injectors, after which it is necessary to replace the failed spare parts in the service conditions.

We would not recommend you to change the nozzles on your own. Such work is notable for its complexity and on modern cars it can only be done by experienced craftsmen from the service station.

In some cases, the reason why the engine does not pick up speed, and there are problems in operation, is the failure of the control unit. The engine’s computer brains send the wrong signals to the engine, which causes the engine to shake and the engine runs intermittently.

It is also possible to determine such a breakdown only after computer diagnostics. Depending on the nature of the problem, it is necessary to either reprogram the control unit or replace it. In the latter case, the cost of repair work can be quite high, since such engine brains have a high cost.

Late ignition is also a common reason why the engine stutters. If the engine does not pick up speed, there is a pronounced tremor, the cause of the problem in this case may be late ignition. The fuel mixture entering the cylinders simply does not burn completely and continues to burn already in the exhaust manifold.

Your Chainsaw Stalls? You Can Fix It, Here’s How

If in carburetor power units it is possible to independently adjust the ignition using a control lamp, there, on modern cars, only craftsmen can do this work using special equipment.

Many car owners have encountered engine problems while operating their car. There can be a lot of reasons for such breakdowns. The car owner can fix some defects on his own, while other breakdowns can be identified and eliminated exclusively at the service center. Below we will tell you what to do if the engine is running intermittently.

READ  How to Install a Chainsaw Starter Spring

We repair the motor ourselves

Often, the problems of uneven operation of the power unit lie on the surface, and it is not difficult to eliminate such breakdowns. 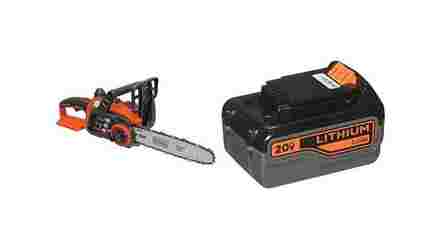 For example, a common reason why the engine does not pick up speed is the failure of high-voltage coils, which leads to spark breakdown in the cylinder, as a result, the power unit begins to tremble and work unevenly.

A sign of a failure of a high-voltage plug is the appearance of a characteristic small tremor at idle, while the motor runs intermittently. In this case, the car owner can independently purchase one coil or the entire set at once. Replacing damaged parts is not difficult and takes about half an hour.

In rare cases, there is a failure of high-voltage wires, on which kinks may appear, due to which the current does not reach the coils, and the cylinder in the motor is turned off.

Another fairly common reason why the engine runs unevenly is the failure of the glow plugs. Over time, carbon deposits appear on the surface of the candles, which worsens the quality of the spark, and the motor does not develop speed.

It is recommended to regularly check the spark plug gap, and after 50 thousand kilometers, replace them completely. So you can ensure smooth and high-quality motor operation.

On VAZ cars, problems with the distributor are often noted. In this case, the engine speed is floating, and the motor may not gain the required speed.

In case of problems with the distributor, cars hardly start, and the power unit revives with noticeable interruptions, its speed drops, and it quickly stalls. The distributor is located under a small protective cover in the immediate vicinity of the timing chain.

To adjust the distributor, you must use the marks on the plastic and a special key that changes the ignition position. You can do this work yourself if you have some experience.

On cars with carburetor power units, contamination of the carburetors and the injection system is often noted. This leads to the fact that the engine does not pick up speed and runs with noticeable interruptions.

Repair in this case may consist in cleaning the jet and the carburetor float chamber. You will need to open this element and blow it with air from the compressor.

In the presence of pronounced oil contamination, they must be cleaned with a cloth soaked in gasoline. After that, we also purge the system with air under pressure.

In this case, it will also not be superfluous to replace the fuel pumps, which can completely fail.

Many car owners think about which engine speed is the most economical. It must be said that for each motor, the optimal speed indicator may differ.