Every person who is familiar with gasoline powered tools knows that sometimes the equipment works intermittently, and may stall at one point and no longer start up. There are a lot of reasons why a chainsaw does not start, we will try to consider the most common of them.

Why the chainsaw starts badly

Consider each reason in more detail.

Contamination of the main filtering elements of a chainsaw adversely affects its operation. 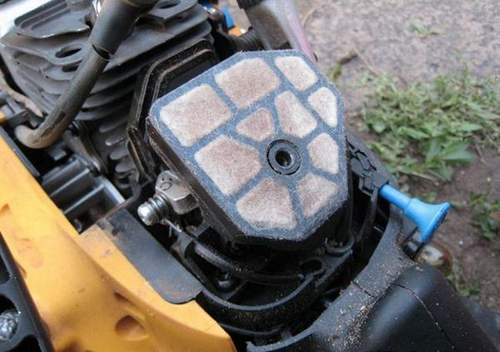 For example, a dirty air filter will not provide full air supply to the carburetor, which will affect the quality of the air-fuel mixture and normal engine starting. Contamination of the fuel filter will make it difficult, or even block the supply of gasoline to the carburetor and make the engine impossible.

One of the frequent cases of difficult start-up of a chainsaw is the wear of a CPG (cylinder-piston group).

During the operation of the tool, the value of the compression indicator falls, and the chainsaw starts to start poorly.

The reasons for the lack of compression, or its reduction, may be natural, because the engine wears out during operation. Problems can also be caused by a serious breakdown, for example, a scuff of the CPG, or a breakdown of the piston ring.

A sign of reduced compression is a weak starter resistance during start-up. With reduced compression, a decrease in the power of the chainsaw is observed, which negatively affects its performance. The problem is eliminated by replacing the piston rings, or completely the CPG.

Incorrect carburetor adjustment will cause the chainsaw to not develop full power. It will be bad to start, or not to start at all. The carburetor setting directly affects the quality of the air-fuel mixture, which is necessary for the normal start-up and further operation of the engine.

If the carburetor is not correctly adjusted, more or less gasoline will be present in the fuel-air mixture than is required, and the mixture will not ignite even with normal sparking.

Excess gasoline in the mixture is usually called overflow. The characteristic signs of overflow, this is a wet spark plug, after several unsuccessful attempts to start the chainsaw.

READ  How To Sharpen A Chainsaw Chain At Home

The spark plug is one of the main elements of the ignition system. A spark forms on its electrodes, and if this element fails, it will be difficult to start up, or not at all possible.

A candle can completely fail, or intermittently or give off a faint spark. Checking the spark plug is quite simple, for this you need to unscrew it from the engine, attach it to the cap of the high-voltage wire and, laying on the cylinder, pull the starter. If the candle is in order, the spark will be powerful with a bluish tint. A faint spark with a reddish tint, a sign of a problem. Defective candle must be replaced.

The reason that a new chainsaw does not start, or starts poorly, may be the ignition coil. Modern chainsaws are equipped with electronic ignition coils. This part cannot be repaired, and, as a rule, if there is a defect, it changes completely.

Clearance between ignition coil and flywheel

An incorrectly set gap between the flywheel and the contacts of the ignition coil affects the quality of sparking, which in turn is responsible for the normal start-up and stable operation of the engine.

In those cases when the chainsaw does not start up hot, you need to conduct a visual inspection of all the main components of the chainsaw. Inspection should begin with a spark plug. Check the spark, inspect the surface of the electrode of the candle, these actions will help establish the direction in which to look for the problem.

Malfunctions in the ignition system

If, when inspecting the spark plug, it is found that it is wet and sparking does not occur at the contacts, this means that the problem should be looked for in the ignition system, inspected the coil, check the clearance between the flywheel and the contacts of the coil. You can also check how tightly the cap of the high-voltage wire sits on the candle, and the candle itself. Try to replace it with a new one.

If during the inspection it was found that there is a spark, and the candle is dry, then there are problems in the fuel system. Its check should begin with the fuel filter. Next, you need to inspect the fuel hose and its attachment to the carburetor, pay attention to fuel leaks from the carburetor and the presence of gasoline in the air filter housing. It is advisable to start removing the carburetor only if a visual inspection did not allow to determine the cause of the breakdown.

A characteristic sign of a problem in the fuel system is an excessive amount of fuel in the engine cylinder. As a rule, the signs of this are an excessively wet spark plug and the presence of a spark at the contacts of the spark plug. In this situation, it is necessary to turn the chainsaw so that the candle hole is directed to the bottom. If at the same time gasoline flows from the cylinder, then the reason that the chainsaw does not start is because fuel is poured into the engine.

“Fills” with fuel, sometimes due to incorrect carburetor adjustment, or its malfunction.

The carburetor adjustment process can be found on the example of the Champion 254 saw, by watching the instruction.

Violation of the sequence of actions when starting on a cold

If a new chainsaw does not start in the cold, then the reason may be in the wrong sequence for starting the engine. As a rule, each manufacturer in the instructions for the chainsaw, indicates the procedure for starting a chainsaw in the cold. Basically, it is similar for all two-stroke internal combustion engines that are installed on chainsaws, and represents the following procedure.

As in the case of a difficult start for hot start, problems in the fuel system can affect both the start or the inability to make it and the cold one. Adjustment of the carburetor, contamination of the fuel filter and line, all these are the reasons that cause difficulties at start-up.

Diagnose the fuel system, this is the first thing you need when it is difficult to start on a cold.

It is worth paying attention to fuel quality, as when using a mixture of gasoline with oil, in which there is a small amount of water, it can be difficult to start up or become impossible.

The mixture must be used fairly fresh, because when storing gasoline diluted with oil for more than a month, its properties are lost and complicates starting, both on a cold and a hot engine. Gasoline for this reason can burn poorly.

Cpg scuffing, sticking rings, CPG wear, air intake through gaskets and gaskets, lower compression, all these problems can make starting a chainsaw impossible or substantially difficult. For example, with not significant wear on the CPG, compression in the engine is reduced. In this case, starting up on the “cold” one will be much more difficult, or the saw may stop starting up, and on the “hot” one, the instrument will start up well.

It is quite difficult to accurately diagnose problems in the engine associated with problems in starting it, and it is better to contact a specialist in this field.

The chainsaw has stalled and will not start

If the tool stalls and does not start for a start, it is worth checking the presence of fuel in the tank. Oddly enough this sounds, but many people forget about it and when a similar situation arises, they immediately try to repair the tool, which can lead to serious breakdowns.

In a situation where the saw has died out and there is still gas in the tank, you need to evaluate how the saw worked up to this point. Maybe when working at the last moment there was an extraneous sound, rattle, ringing, there was a loss of power or the instrument stopped abruptly. All this allows you to pre-assess the situation.

Quite often there is a situation when the saw worked and died out abruptly, which was caused by engine jamming, which in turn occurred as a result of a break in the piston skirt, destruction of the crankshaft bearing, departure of the corkscrew of the piston pin, or rupture of the piston ring.

Jamming of the engine is easy to determine by pulling the starter cord. In the case when the starter does not crank, most likely it has jammed, and further repairs are possible only in the service center.

During operation of the chainsaw, vibration occurs that can cause damage or breaks in the fuel line of the chainsaw. In this case, the chainsaw stalls and it will be impossible to start. To diagnose a malfunction, it is necessary to conduct an inspection and determine the presence of fuel leaks.

Overheating of the engine during operation may cause the saw to stall and not start. Overheating is quite dangerous, as it can cause the piston to melt in the cylinder and jam the engine. In the first cases of overheating, it is worthwhile to diagnose the instrument for the presence of foreign air into the engine, and adjust the carburetor.

Air leaks, as well as incorrect carburetor adjustments affect the maximum number of engine revolutions and its lubrication, which in turn causes overheating and wedging of the tool.

The main reasons why the chainsaw does not start in the. The will be useful to those who quickly want to start a saw, the author gives practical advice.

If a situation arises when the chainsaw does not start, it is important to correctly diagnose, determine the direction in which to look for a malfunction. You should not use a tool that does not work at idle, as this indicates the presence of air leakage into the engine and can lead to serious problems. If experience in repairing chainsaws is not enough, it is better to contact a specialist who will save your time and nerves.