Structurally, the Taiga 245 saw is made with a minimum of plastic parts, which negatively affects its weight category, the dry weight of the tool with the saw headset is less than 9 kg.

Electronic ignition does not require separate maintenance. The main difficulty for novice sawers is setting up the fuel supply system.

The disadvantage is still considered to be large, in relation to similar models of other brands, weight. The resource of the cylinder and the connecting rod-piston group leaves much to be desired.

HOW TO TUNE THE CARBURETOR ON THAT OLD CHAIN SAW

The choice of a home chainsaw, in addition to general parameters, is largely influenced by the price, the complexity of maintenance and self-troubleshooting, the availability of spare parts and consumables recommended by the manufacturer. 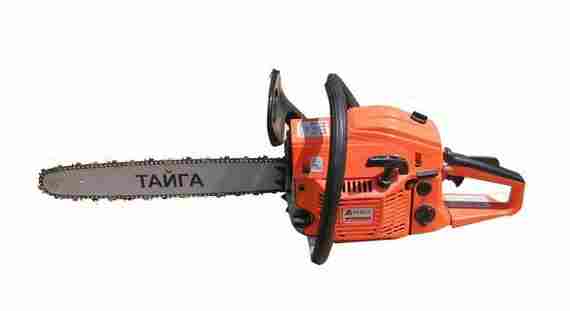 Of the models of past years, several versions of the Friendship chainsaw have identical characteristics. Modern, similar in cost, power and purpose analogs of the household class are the Chinese chainsaws Stihl 180, Champion 241-16, Huter BS-52, DAEWOO DACS 4500 and a number of other brand models.

A small range of domestic-made chainsaw equipment includes several popular, simple in design and inexpensive household-class models. Chainsaw Taiga 245 was not widely used in the field of industrial logging, but received a positive assessment in the private sector.

Part of the production facilities of the Degtyarev plant, abbreviated ZID, specializes in the production of this model. A feature of this development is the use of basic components of units and assemblies of domestic production.

Work in the sequence specified by the instruction is carried out after cleaning the filter of the air intake device, on an engine preheated to operating temperature.

By rotating the corresponding screws of the quantity and quality, the composition of the gasoline-air emulsion entering the engine is reduced to a ratio of 16: 1.

Running your chainsaw on a rich or lean mixture results in:

If the tuning of the fuel system did not give the desired result, it is necessary to remove and wash the carburetor with the obligatory cleaning of the nozzles, check the condition of the sealing gasket.

A pinched fuel line or a dirty fuel filter may be the cause of an unstable powertrain.

In particular, many potential buyers are attracted by the possibility of independent, affordable maintenance and overhaul. Highly informative operating instructions, spare parts available in the assortment and price range, contributes to the independent solution of adjustment and repair problems.

Timely, and fully performed DIY repairs can reduce operating costs by almost half, and reduce the level of dependence on service and repair structures.

Even against the background of modern chainsaw technology, the characteristics of Soviet-made models look quite decent. I managed to independently reanimate the decommissioned Taiga chainsaw, which was not identified due to the lack of a model nameplate, which had served the former owner for 11 long years before me. The machine is heavy, no doubt, but less noisy and more economical to operate than many modern developments. Taiga confidently runs on low-octane fuel, is not capricious in the choice of motor and chain lubrication.
Andrei

Having worked at one time, but visually the whole Taiga 245 went to me as an inheritance when I bought a country house. I read a lot of good and bad about this tool, but until I repair it myself and check it in operation, I will not make any comments. In appearance, the car is solid, compared to the plastic Chinese sawing consumer goods. like a tank against a Zhiguli. As soon as I bring the tool into working condition, I will immediately unsubscribe.
Sergey Vladislavovich

The main disadvantage of the budget models of the previous series is the moderate resource of the cylinder and the connecting rod-piston group. There is also the use of ineffective air purification schemes. These shortcomings have been eliminated in the new generation chainsaws.

A household-class chainsaw with a powerful drive and modern technical equipment is capable of mastering a wide range of chores related to sawing any wood, including dense and frozen wood with a diameter of up to 500 mm.

The model is equipped with a 4.3 strong engine with an easy start device and a booster pump, a 20 inch headset with an automatic chain lubrication system.

Work comfort is provided by:

Despite the variety of chainsaw imports, the Taiga 3850 model is still in stable demand.

The model, universal in many parameters, is focused on mastering large volumes of sawing operations of varying complexity. The capabilities of the tool are effectively realized with the power of a 3-horsepower, low-speed power unit with a cylinder volume of 75 cm3.

In the list of advantages of the 245 series chainsaw:

See also  How To Start A Husqvarna Chainsaw

The engine runs on a 20: 1 gasoline-oil fuel mixture, which is fed to the carburetor from an internal 600 ml tank. Use standard summer or winter engine oil to cool and lubricate the saw head.

A characteristic feature of the entire model range is the minimum number of plastic parts, as a result of which the Taiga chainsaw turned out to be quite heavy. The main technical characteristics of even the very first models largely correspond to modern requirements.

The design of the tool compares favorably with similar analogs with a large margin of safety and resistance to the entire range of operating loads.

The users have given a high assessment of the maintainability of the entire model range, do-it-yourself repairs can be performed in a domestic environment with a minimum set of tools. Spare parts are produced in a sufficient range, the list of advantages includes an affordable cost of consumables.

One of the latest developments of the design bureau of the Degtyarev plant, the 4000 series chainsaw, equipped with a 4-kilowatt engine and a high-performance 450 mm headset, has the working parameters of a professional-grade tool. 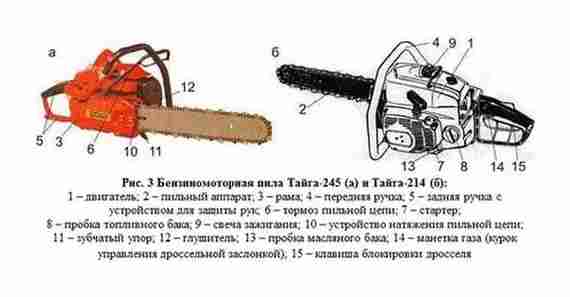 How To Actually Tune A Chainsaw!

Safety of work is guaranteed by a comfortable grip of the saw, quick activation of the hand brake of the saw chain, application of anti-slip rubber pads to the handles.

When developing the 4500 series household chainsaw, the main emphasis was placed on increasing the real resource of component parts and assemblies, increasing the level of comfort of work, and reducing operating costs. The power of the fuel-efficient two-stroke carburetor engine with a volume of 45 cm3 is 2.7 hp.

Taiga 4500 is one of the few budget models equipped with an efficient and easy-to-maintain centrifugal air purification system and an inertial emergency stop switch. When the headset enters the cut, the likelihood of a kickback, which initiates the formation of a traumatic situation, is significantly reduced.

The universal bar attachment unit allows you to use saw bars of other brands similar in chain pitch and other parameters. This model in all respects complies with the current quality and safety standards.

The actual performance and economy of a chainsaw is largely determined by the correct setting of the fuel supply system. The sequence for adjusting the carburetor is detailed in a special section of the instruction manual.

The list of preparatory work includes cleaning the air intake filter and warming up the engine to operating temperature. By turning the adjusting screws of the quantity and quality, the engine is brought to the optimal traction mode and stable idle speed.

Poor sensitivity to regulation may be the result of clogged nozzles, depressurization of the float valve, or filling the system with a fuel surrogate.

The most powerful chainsaw in its range of the 6300 series is powered by an 8.5 hp engine with a cylinder displacement of 58 cm3. Cold start problem eliminated by easy start systems and booster pump.

Economical fuel consumption is facilitated by a simplified carburetor adjustment, a piston with two compression rings, a transfer of operating modes from the maximum to the nominal speed range.

Universal rail 450 mm long allows you to cut wood of different densities in the transverse and longitudinal direction.

We offer you to watch a video demonstrating the work of the ZID Taiga 245 chainsaw. A Soviet-era saw is used to cut a tree with a diameter of a meter. Recommended for viewing.

The carburetor of the Taiga 245 chainsaw deserves special attention, because most of the malfunctions fall on it. Taiga 245 is equipped with a KMP-100US diaphragm-type floatless carburetor with a built-in pump. The pump delivers fuel from the tank to the carburetor.

The main structural elements of the carburetor:

Some Taiga 245 chainsaws were equipped with Japanese Walbro carburetors. There is no data on them.

There is no need to adjust the carburetor for no reason. it comes from the factory with optimal adjustments. Additional carburetor adjustments may be required when there is a sudden change in temperature, or after disassembling the carburetor itself. It should be performed strictly according to the instructions with the help of 3 screws responsible for adjusting the supply of the fuel-air mixture.

Dvitagel is one of the weak points of the Taiga 245 chainsaw. Common problems:

If you see an excess of the fuel mixture on the spark plugs, it means that it has been “thrown”, it is worth wiping the spark plug, dry it, put it back and try to start.

Assess the color of the carbon deposits on the candles. If it is sandy, then the candle is working. Any other color: black, yellow, red, gray, it should be replaced.

Taiga 245 is a domestic manufacturer’s chainsaw manufactured at the Degtyarev plant, abbreviated as ZID. The high power of the engine makes it possible to use it both for work in the forest and for domestic needs. Today, the Taiga chainsaw is morally outdated, but it continues to be popular among the country’s population. Saw, not often, but it breaks, so we will consider the main possible breakdowns and how to fix them with our own hands.

Unlike the previous model, this chainsaw is painted yellow, although it has no cardinal differences in other characteristics. The unit is powered by a 5.2 hp single-cylinder two-stroke engine, equipped with a 16-inch guide bar and a 3/8 ″ chain. This configuration allows the tool to be used for various repair and construction work, for harvesting and sawing firewood, tree crown and hedge maintenance. Like other models of this manufacturer, the Taiga BP-3850 chainsaw is equipped with a primer and a lock button against accidental activation, a primer and a reliable brake for instant chain stopping.

With its high characteristics, the tool has a budget.

Today it is perhaps the most popular chainsaw in the manufacturer’s model range. Thanks to the high engine power (4.7 hp), the tool can be used both in household and industrial purposes, including for non-professional felling. The machine is equipped with an 18 “bar and a 0.325” pitch saw chain. Thanks to the presence of primer and starter with “easy start” function, you do not have to waste time and effort when starting the engine. We also note the presence of an effective vibration damping system on metal springs and rubberized handles. In the production of the unit, high-quality materials were used, and the parts of the piston group are chrome-plated.

With such characteristics, the Taiga BP 4000 chainsaw weighs about 7 kilograms, you can buy a tool at a price of 4,100 rubles.