Brush replacement. The most common type of breakdown is the wear of the engine brushes, the replacement of which can be done independently at home. Sometimes, brushes can be replaced without disassembling the drill body. For some models, it is enough to unscrew the plugs from the installation windows and install new brushes. For other models, disassembly of the case is required for replacement, in this case, it is necessary to carefully remove the brush holders and remove worn out brushes from them.

The need to replace the brushes can be determined by the increased sparking, which is visible in the ventilation slots of the housing. The second way of determining is chaotic “jerking” drill during operation.

Power cord. The cord is checked with an ohmmeter, one probe is connected to the contact of the power plug, the other to the core of the cord. Lack of resistance indicates a break. In this case, the repair of the drill comes down to replacing the power cord.

Motor diagnostics. In second place, according to the number of breakdowns of the drill, it is possible to put a malfunction of engine elements and most often anchors. The failure of the anchor or stator occurs for two reasons. Improper operation and poor-quality winding wire. World-renowned manufacturers use expensive winding wire with double insulation with heat-resistant varnish, which significantly increases the reliability of engines. Accordingly, in cheap models, the insulation quality of the coil wire leaves much to be desired. Improper operation is reduced to frequent overloading of the drill or continuous operation, without interruptions for cooling the engine. Do-it-yourself repair of the drill by rewinding the anchor or stator, in this case it is impossible without special devices. Only replace the element completely (exclusively experienced repairmen will be able to rewind the anchor or stator with their own hands).

To replace the rotor or stator, it is necessary to disassemble the housing, disconnect the wires, brushes, if necessary, remove the drive gear, and remove the entire motor together with the thrust bearings. Replace the defective element and reinstall the engine.

An anchor malfunction can be determined by a characteristic smell, an increase in spark formation, while the sparks have a circular motion in the direction of movement of the anchor. Pronounced “burnt” windings can be seen by visual inspection. But if the engine power has fallen, but there are no signs described above, then you should resort to the help of measuring instruments. Ohmmeter and megohmmeter.

READ  What To Make From Drills From A Punch

Windings (stator and anchors) are subject to only three damage. Inter-turn electrical breakdown, breakdown on “body” (magnetic circuit) and open winding. The breakdown to the case is determined quite simply, it is enough to touch any output of the winding and the magnetic core with the megohm probes. Resistance of more than 500 megohms indicates the absence of breakdown. It should be borne in mind that measurements should be carried out by a megger, in which the measuring voltage is not less than 100 volts. Making measurements with a simple multimeter, it is impossible to accurately determine that there is no breakdown, but you can determine that there is definitely a breakdown.

It is quite difficult to determine the inter-turn breakdown of the anchor, unless, of course, it is visually visible. To do this, you can use a special transformer, which has only a primary winding and a break in the magnetic circuit in the form of a gutter, for installing anchors in it. In this case, the anchor with its core becomes the secondary winding. Turning the anchor, so that there would be windings in turn, we put a thin metal plate on the armature core. If the winding is short-circuited, then the plate starts to rattle strongly, while the winding heats up significantly.

Often, an interturn circuit is detected in visible sections of the wire or the armature bar: the coils can be bent, wrinkled (i.E. Pressed against each other), or there can be any conductive particles between them. If so, then it is necessary to eliminate these faults by correcting the bruises of the splint or by removing foreign bodies, respectively. Also, a short circuit can be detected between adjacent collector plates.

You can determine the breakage of the armature winding if you connect a milliammeter to adjacent armature plates and gradually turn the armature. In whole windings, a certain identical current will occur, a broken one will show either an increase in current or its complete absence.

A break in the stator windings is determined by connecting an ohmmeter to the disconnected ends of the windings; the absence of resistance indicates a complete break.

Speed ​​control and reverse. The presence of voltage at the input terminals of the power button and the absence at the output indicates faulty contacts or components of the speed controller circuit. You can disassemble the button by gently picking up the clips of the protective cover and pulling it off the button housing. A visual inspection of the terminals will allow you to judge their performance. Blackened terminals are cleaned of carbon deposits with alcohol or fine sandpaper. Then the button is again assembled and checked for contact, if nothing has changed, then the button with the regulator should be replaced. The speed controller is made on a substrate and is completely filled with an insulating compound, therefore it cannot be repaired. Another characteristic malfunction of the button is the erasing of the working layer under the slider of the rheostat. The easiest way out. Replacing the entire button.

READ  How to Make a Hole In Concrete Without Drills

Do-it-yourself repair of a drill button is only possible with certain skills. It is important to understand that after opening the case, many switching details will simply fall out of the case. This can only be prevented by smoothly lifting the cover initially and by descriptively sketching the location of contacts and springs.

The reverse device (if it is not located in the button housing) has its change-over contacts, therefore it is also prone to contact loss. The disassembly and cleaning mechanism is the same as the buttons. 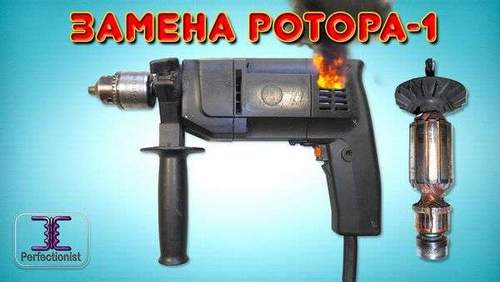 The wiring diagram, and in particular the wiring diagram of the drill button, may differ in different models. The simplest scheme, and best demonstrating the principle of operation, is as follows. One reason from the power cord is connected to the speed controller.

In order not to get confused, it is important to understand that the speed control and reverse control device. These are two different parts that often have different cases.

In the reverse device, such a switchover occurs, therefore, the rotor brushes are connected to the stator windings through it. There may be a circuit on this device showing which wires are connected internally.

READ  How to Choose an Electric Drill For Home

The design of the electric drill speed controller provides for connecting a capacitor and connecting to the controller both wires coming from the outlet. The diagram in the figure below, for a better understanding, is slightly simplified: there is no reverse device, the stator windings to which the wires from the controller are connected are not yet shown (see diagrams above).

In the case of the electric drill shown in the photo, only the two lower contacts are used: the leftmost and the rightmost. There is no capacitor, and the second wire of the power cord is connected directly to the stator winding.

Read about the principle of operation of the speed controller in the article the device of the drill.

Gearbox. The presence of extraneous sounds, grinding and wedging of the cartridge indicates a malfunction of the gearbox or gear shift mechanism, if any. In this case, it is necessary to inspect all gears and bearings. If worn slots or broken teeth on the gears are detected, a complete replacement of these elements is necessary.

Bearings are checked for suitability after removing them from the axis of the armature or drill body using special pullers. Clamping the inner clip with two fingers, you need to scroll the outer clip. Uneven skipping of the clip or “rustle”, when scrolling, they talk about the need to replace the bearing. If the bearing is not replaced on time, it will lead to jamming of the armature, or, in the best case, the bearing will simply rotate in the seat.

Drill Chuck Replacement. The cartridge is subject to wear, namely clamping “sponges”, due to the ingress of dirt and abrasive residues of building materials into it. If the cartridge must be replaced, it is necessary to unscrew the screw lock inside the cartridge (left-hand thread) and unscrew it from the shaft.

In conclusion, I want to add: when assembling the drill after it is repaired, make sure that the wires are not pinched by the top cover. If everything is in order, the two halves will collapse without a gap. Otherwise, when tightening the screws, the wires can flatten or bite.