Innovative technologies in construction are developing every day, it is no longer a secret that a screwdriver is an indispensable assistant for both an experienced specialist and a novice master. Thanks to him, you can easily tighten all kinds of screws and self-tapping screws when assembling furniture designs, as well as when repairing equipment and residential premises. 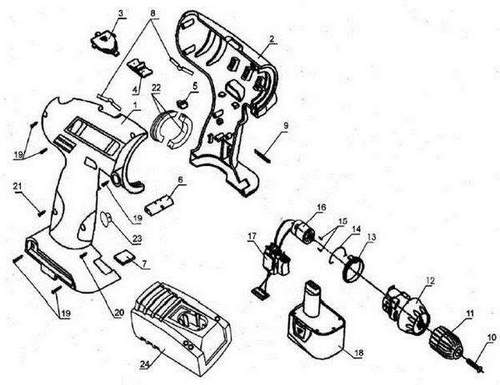 The fact that any equipment fails over time is no longer news to us, so it becomes possible to disassemble a screwdriver and try to repair it with your own hands. But only without fanaticism, be careful when disassembling, especially such models as: interskol yes 12er 01, interskol yes 18er.

How is a screwdriver arranged?

What problems can I fix in my home environment? How to recognize this or that breakdown? To give specific answers to the questions asked, let’s first look at the internal mechanism of the tool. The main protruding element is the power button. It is used to start the device and to change the speed, the direction of rotation of the working part. The cartridge.

Speed ​​adjustment is carried out thanks to an electronic device based on a transistor. The speed of revolutions is directly proportional to the force of pressing the button. The reverse is triggered by replacing the polarity of the electric current at the terminals. Traditionally, a screwdriver is equipped with single-phase collector type motors that operate on continuous current. The engine includes a housing, magnets, an anchor and brushes.

Rotation from the motor goes to the gearbox. Further, it converts high engine speeds into reduced cycles on the shaft, a cartridge with active bits is fixed in it. The gearbox can be used classic, as on a conventional drill, including a planetary one. Recently, the classic gearbox is almost not used, so we will not stop and go further. The planetary gear includes:

Then follows a force stabilizer with sixteen positions. These positions give a specific tension on the self-tapping screw, so as not to spoil the material with which they are attached. The last component is the cartridge.

How to disassemble a screwdriver in general form

Let’s do a disassembly analysis, an example is a Makita screwdriver:

How the cartridge is disassembled

If the cartridge fixing is conical, then it is removed simply. By careful blows with a hammer on the block case. If the fasteners are threaded, you will need the following steps:

It also happens that all of the above methods do not work, and then one thing remains. To disassemble the screwdriver, after which:

And if garbage is found in the gearbox, then you need to do so.

How to disassemble the battery

The mounting screws on the underside can vary in number, from four to six. Often unscrew with a Phillips screwdriver. Screws come in various lengths. This must be taken into account so as not to confuse them with each other during assembly. On some modifications, you can find a non-separable case. Then examine the entire surface and find a special strip along which the factory gluing passes. Next, you need to take a strong knife and insert it into the groove, slightly swaying to the sides. If the case breaks into the upper and lower parts, the autopsy was successful. Not a problem if this happens past the groove. All discrepancies can be glued with good superglue. The upper part of the housing contains several parts for the battery. At each of these components, a voltage is measured, which must certainly be in the range of the optimal level. If the difference is over 10%, such a battery needs to be replaced.

Each manufacturer seeks to create a tool that will be as convenient as possible in the work process, creating an extensive assortment of models. From basic level screwdrivers to professional samples.

Hitachi screwdrivers prioritize the excellent build quality as well as the practicality of their tools. Bosch’s model cordless screwdriver collection is practically no different from its counterparts, which have a cord for connecting to 220 V. Equipped with mode switches, as well as an off button and an accelerator option, Bosch screwdrivers are an excellent solution for home and professional use. In addition, such brands as Interskol, Makita, Cmi, Bison have proven themselves well.