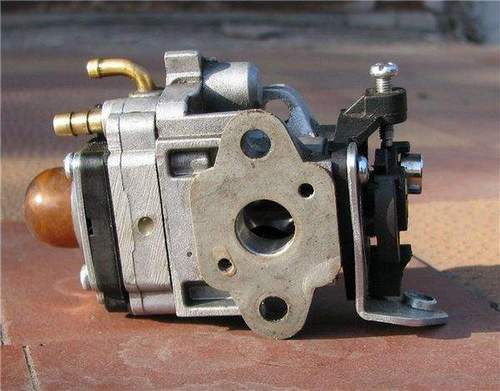 Very often, complaints from owners of gas trimmers are associated with various kinds of carburetor malfunctions. Of course, it is best in this case to seek the help of specialists in this field, for whom the repair of carburetors of gas trimmers is an integral part of the profession. However, if you are still familiar with the basic principles of the trimmer carburetor, you can try to figure out the problem yourself so as not to overpay for money in the service, as sometimes a breakdown can be really not serious.

This article is intended to help you deal with the problem.

Next, the most common breakdowns and the causes of their occurrence will be analyzed.

The first step is to generally inspect the carburetor and find out if there is a fuel leak.

If it turns out that there are no problems with fuel, you must remove the carburetor from the engine and check the condition of the gasket located next to the carburetor.

If there are no malfunctions here, you can try to check the carburetor for the degree of tightness.

To do this, you can purchase a special device, which is part of the repair tool kits for repairing the carburetor of the lawn mowers and is a special manometer, which, in fact, checks for leaks.

If you do not want to spend money on its purchase, you can use the usual medical tonometer, on which you just need to change the pressure gauge.

When using this unit, pay attention to the indication.

If the pressure does not drop and remains the same for a long time, you can be calm, because this indicates the tightness of the carburetor.

If the pressure begins to decrease after a certain time, then there are still problems.

They may be due to damage to any carburetor parts.

A visual inspection of the carburetor will help to identify fuel leakage and air suction, but the main causes of device failure lie inside. Therefore, to determine and most importantly fix the breakdown, the carburetor must be disassembled.

To disassemble the carburetor lawn mowers a lot of effort is not necessary.

It is enough to unscrew the four screws on one side

And two on the other. This can be done using an ordinary Phillips screwdriver. Gently unscrew the screws and fold to the side. They may be needed during assembly. It is advisable to lay the table with a white cloth before disassembling, so that everything, even the smallest details that can fall out when disassembling, can be seen.

We begin dismantling from the side of the fuel supply system.

We remove the primer. The pumping bubble, which is noteworthy; it is simply impossible to install the carburetor parts incorrectly during assembly. Products have characteristic ebbs and holes.

Now remove the membrane. It is she who performs the function of pumping fuel into the carburetor.

During vibration, the membrane on the other side exerts pressure on the beam of the mechanism and the needle rises, which, in turn, opens the hole and fuel is supplied.

Remove the carburetor cover with the injection mechanism.

Next, another membrane is installed. We carefully remove it.

Under the membrane is another gasket. We carefully clean it too, in no case damaging it.

Next, go to the dismantling of parts on the back of the carburetor. As mentioned earlier, we unscrew the two bolts. This is an air supply system.

A valve is located here, which, when “gas” is added, opens and increases the flow of air into the engine.

After its removal, the bare body remains in the hands. Carburetor disassembled.

Identification of faults and their elimination

Now it is worth paying attention to the malfunctions that occur during the operation of the carburetor and methods for their elimination.

The first thing that happens is that the holes and nozzles in the fuel supply system become clogged with dirt. Filters installed in the tank and directly in the carburetor do not help. They nevertheless pass small particles, which become the cause of the lawn mowing failure.

Now we need to get the needle.

To do this, unscrew the bolt on the mechanism, holding it with your finger. The fact is, there is a spring there and careless action will cause it to be lost.

We take out the needle, see photo and spring.

How to purge. The most effective way is the use of an ultrasonic bath.

It is filled either with a special liquid or with gasoline, a carburetor is placed there and under the influence of ultrasound, the so-called cavitation effect, the channels are cleaned of impurities.

You can use the compressor available on the farm and clean the carburetor channels. However, this method is effective if the pollution is not very large.

Now we need to blow through the channels in the body and the carburetor cover. See photo.

Another piece of dirt can get stuck under the needle. See photo. This will also lead to a failure of the lawn mowers.

Important! When cleaning the carburetor, never use needles, pins or wires. Even the slightest scratch will damage the carburetor. It will have to be changed entirely.

It is located on the carburetor cover and is a small metal mesh. Its pollution occurs very often. This is due to the deposition of oil, additives, and dirt on it.

Sometimes, when disassembling into grids, a certain film is detected. For this carburetor, there is not enough fuel and the lawn mower either does not start, or it works intermittently. The cleaning methods are identical to the first reason: an ultrasonic bath, a compressor or a spray can with a special solution. In addition, if the mesh is thoroughly clogged, you need to take a soft brush for watercolor paints, dip it in gasoline and rinse it gently without damaging it.

They have the ability to wear during operation. From prolonged use, they are deformed, stretched, lose elasticity, poor-quality fuel corrodes them, and can no longer perform their functions well. This also applies to the needle itself. The fact is that it is covered with a thin layer of rubber, which wears out during operation and can no longer fit tightly into the hole. Lawn mowing starts to work intermittently. To eliminate such a breakdown, all worn parts must be replaced. Where to get them?

It includes two membranes, a gasket, a needle valve and a spring.

All carburetor wearing parts can be replaced. Therefore, you should not rush and buy a new one, and you don’t need to run to the workshop either, repair is possible for any user of lawn mowers. Professionals claim that the quality of components in the repair kit even exceeds the characteristics of the carburetor’s native parts. Therefore, a well-repaired unit will work better than a new one.

Problem 4: wear of the bubble button for manual pumping

In addition, a bubble button for manual pumping of fuel may fail. The impact of gasoline on it leads to the fact that during prolonged use, the rubber corrodes and it begins to stick together or under the influence of low temperatures, for example, during storage, bursts. The button should also be replaced if necessary. In addition, her cost is small and will not affect the size of the repair budget.

Based on the foregoing, we can conclude that there are only three main malfunctions of the carburetor: clogging of channels, pollution of the fine filter and failure of components. In the first two cases, cleaning is enough, and in the third, the repair kit will help.

Assembling a carburetor lawn mowers is not difficult. You must complete all the steps in the reverse order:

Install a spring and a needle valve in the carburetor cover. Holding the spring with your finger, tighten the fastening bolt.

Screw the valve of the air supply system to the body of the product with two screws.

Turn the carburetor over and proceed with assembling the fuel system. First you need to put the gasket.

Install the plate with the manual fuel pump button and tighten the four screws.

The carburetor is assembled and ready for further use.

For the first time, repairing a carburetor for lawn mowers may seem like a complicated process, but if you have to disassemble it a second time, this procedure will not cause any particular difficulties.

If you did not find any of these problems in your carburetor, it is recommended to seek help from a specialized service.