When to adjust the Stihl 180 carburetor

First, it is worth deciding why it may even be necessary to adjust and repair the stihl ms 180 carburetor. So, this must be done in the following cases:

This list can be continued for a long time, but we have identified the main reasons. Before proceeding with the adjustment, you need to know what are the main parts of the carburetor on the Stihl 180 chainsaw, and who makes it.

So, the stihl ms 180 carburetor is developed and manufactured by a subsidiary of Stihl called Zama. Original carburetors, on their body have a company logo, which guarantees product quality.

The fuel injector is mounted in the carburetor body in such a way that it is a connecting link between the distribution chamber and the cavity in which the throttle valve is installed. Simultaneously with the fuel, air is supplied to the nozzle and an air mixture is formed. The nozzle has a check valve that blocks the flow of air in the reverse sequence, that is, from the throttle chamber to the distribution chamber.

Frequent Stihl carburetor breakdown and how to avoid it

A common reason for the failure of a carburetor on a Stihl chainsaw is a sticking valve in the nozzle. The reason for sticking is a violation of the storage of the chainsaw, or rather the instructions of the manufacturer Stihl 180 for proper preparation for storage.

As follows from the instructions, before long-term storage, it is necessary to drain the fuel from the tank, then start the saw and burn the gasoline from the carburetor. Failure to comply with this elementary rule entails the following consequences. The forsknui valve, being in direct contact with the fuel, sticks to the body, since the gasoline evaporates little by little and only sticky oil remains. It is impossible to replace the nozzle, because they are not in the repair kit, you can only try to knock it out and rinse it, which is not always possible to do without damaging the nozzle.

The throttle valve is installed in the carburetor body and is responsible for increasing the supply of the fuel mixture directly to the engine cylinder. At the moment of pressing the gas, the throttle valve opens slightly, thereby increasing the throughput of the channel and the fuel from the carburetor cavity, rushes into the cylinder in a larger volume. 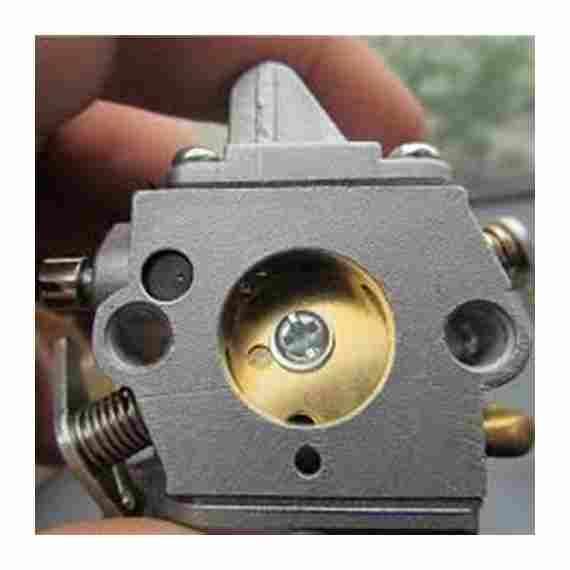 Combustion of a larger volume of fuel increases the amount of generated energy, which affects the power and speed of the processes. The damper is installed on the shaft passing through the entire carburetor body. At the exit of the shaft from the body, a mount for the gas cable is installed, next to it is a cone-shaped adjusting screw responsible for adjusting the idle speed. By tightening the screw, you can slightly adjust the position of the shaft and the damper installed on it, thereby increasing or decreasing the idle speed, slightly opening or vice versa closing the damper.

After we have examined the carburetor device, it will not be difficult to determine the reason why fuel enters the combustion chamber in a larger volume. This is due to the wear of the gasket between the compensator cover and the carburetor body. You ask how this might affect?

The answer is simple, by contracting, the gasket releases the diaphragm on top of it a fraction of a millimeter down. She, in turn, will press harder on the rocker arm of the needle valve, it will open more than it should be and the fuel will flow in excess (it will start to overflow).

Another reason is the stretching of the diaphragm itself, this happens as a result of natural wear and tear. It is impossible to prevent this process, but you can solve the problem by periodically changing all gaskets, carburetor diaphragms, and fuel pump. There is a repair kit for this.

When cleaning the chainsaw with compressed air, never blow into the fuel pipe, as this may stretch the diaphragm.

How to repair a Stihl 180 carburetor with your own hands

The removal process is best shown in the video attached below. It also demonstrates the basic minimum steps in order to bring the node into working order. Schematically, this process looks like this: remove the cover, rods, unscrew the unit.

In the distribution chamber, as in the fuel pump, there is also a membrane that opens and regulates the fuel supply by pressing a special rocker, while raising its needle valve.

The chamber lid is the compensator body, which is attached to the carburetor with four screws, a gasket is installed between the body and the lid, which increases the height of the chamber and is responsible for sealing.

A special case of the previous problem. The solution required is the same.

I would like to reiterate that the Stihl carburettors, which are manufactured by its subsidiary Zama, are very reliable. With proper operation and storage, they are able to serve the entire period allotted to the chainsaw without repair.

In order to purge, change the gaskets or the needle valve, the carburetor must be disassembled. To do this, unscrew 4 screws on the expansion joint cover and one on the fuel pump.

Having opened the case, you should be extremely careful, because if debris gets inside the carburetor, it will make it impossible to work. The thickness of the channels in it is comparable to the thickness of a thread or even a human hair.

A video for repairing a Stihl 180 carburetor can be viewed below. In it, the master tells in detail about the problems and clearly demonstrates the entire repair process.

Faults that can be eliminated by repairing the carburetor

Let’s make a reservation right away. diagnostics is an insidious thing. Sometimes the same symptom occurs due to completely different reasons. But we will check everything and find it together. So:

The main malfunctions of the Stihl 180 chainsaw carburetor include the following.

A common problem due to which the Stihl 180 is unstable is the loss of a retaining ring on the throttle shaft, as a result, it begins to wobble and play, which in turn leads to interruptions in operation.

So, you’ve decided to remove the carburetor and diagnose it. The withdrawal procedure is as follows:

A more detailed and visual algorithm for dismantling the carburetor from the chainsaw is presented in the video.

As for disassembling the carburetor of the Stihl 180 chainsaw, everything is simple. 1 bolt is unscrewed on the fuel pump cover and 4 bolts on the main chamber cover. This is enough to change all the necessary components from the repair kit.

After disassembly, the carburetor must be rinsed in gasoline, and the channels and nozzles must be blown out with compressed air. Under no circumstances should the carburetor be blown out under high pressure and in the assembled state. Otherwise, you can stretch the membrane or diaphragm. Carburetor stops working properly.

In order to assess the condition of the filter mesh and membrane, you need to perform the following sequence of actions:

As for the Stihl 180 carburetor repair kit, it includes a set of gaskets for covers, a diaphragm and a membrane, a needle valve, a rocker arm with an axle and a spring.

Direct disassembly of the Stihl 180 begins with the removal of the handle, which is attached to the body of the chainsaw using three rubber shock absorbers. To remove, it is necessary to remove the plastic plugs from the inner cavity of the shock absorbers, then, using a powerful screwdriver, squeeze out first the upper shock absorber, then the one closer to the rear handle.

At the back of the handle there is a gas trigger, which is connected to the carburetor through a wire rod, in order to disconnect the rod from the gas trigger, it is necessary to unscrew two screws and disassemble the handle.

When the handle remains on one shock absorber, it is necessary to unscrew the body of the chainsaw from the inside of the handle and bend it to the side, remove the body from the last rubber band.

The Stihl 180 muffler is attached with two nuts, by unscrewing which you need to pull it towards you, it can be easily removed.

The coil is mounted on two screws, to remove you just need to unscrew them.

The engine is held in place by 4 screws installed on the bottom of the Stihl 180 chainsaw. To remove, unscrew them, then carefully remove the engine from the seat and the rubber pipe of the carburetor.

To disassemble the engine, 4 crankcase screws are unscrewed, and it is removed, then you can remove the crankshaft complete with oil seals, bearings and piston rings.

Removing bearings and seals usually does not require additional tools, but if the bearings were pressed onto the shaft with force, then a special puller will be needed for dismantling.

Remove the drive sprocket before disassembling the clutch. To do this, carefully remove the lock washer from the grooves on the shaft and remove the sprocket and needle bearing.

With a high head 19, it is necessary to unscrew the clutch. The thread on it is left-handed, so it unscrews towards the tire, and not the back of the Stihl 180 saw.

Having unscrewed and removed the clutch, you need to immediately remove the reflective plate and the oil pump drive, this is easy to do, because they are put on the shaft without any fastening.

At the next stage, the upper housing cover is removed and the 4 starter mounting screws are loosened, after which it is necessary to remove the oil tank and fuel barrel covers. The starter is removed quite simply and there should be no problems.

The repair of any equipment should begin with the preparatory work, and the Stihl 180 saw is no exception. At the preparatory stage, before the Stihl 180 chainsaw is disassembled, it is necessary to remove the side cover, chain and tire from the chainsaw. Further, with the help of a compressor and a brush, you need to clean the chainsaw from dirt, sawdust, oil drips and other things.

When cleaning the saw, pay special attention to the place where the chain saw drive sprocket is located, since this is the most polluted area.

In places with a large accumulation of oil, can be washed with clean gasoline.

The flywheel of the Stihl 180 chainsaw is twisted with great effort, so a head with a metal knob is required to remove it. The nut holding the flywheel is unscrewed by the head by 13.

After the piston is locked in the cylinder, you can unscrew the flywheel nut. The thread in the nut is ordinary, so you need to turn it to the left. Having loosened the nut, it is not necessary to remove it to the end, it is enough to unscrew it until its upper edge is equal to the tip of the shaft, after which a soft metal drift is installed on the nut and a sharp blow is made on it. Thus, the flywheel from a sharp impact jumps off the shaft and can be easily removed without the help of additional tools.