Filled Candles How to Start a Saw

Affordable Solutions for the Home Master 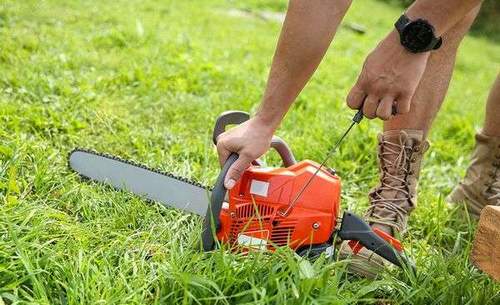 When the chainsaw engine suddenly stops in our hands, there is a slight certainty that we will start the saw again. But after several unsuccessful attempts, we already realize that we will not be able to do this with ease, as we hoped, and we understand that there is a reason for this.

There are many factors that determine this or that malfunction of the chainsaw engine, and the most influential, in my opinion, is determined by the quality of the fuel mixture for the engine. Where and what kind of gasoline is taken by us is determined only after its use as part of the fuel.

Two-stroke engine oil is produced by many manufacturers, indicating their individual recommendations and standards for the use of oil as part of the fuel mixture for the engine, which we pay little attention to and sometimes measure out an amount of oil by eye, determining its corresponding proportion for fuel to engine selected chainsaw. And sometimes we pour some derivative of the basement craft at all and don’t guess about the big “gift” expected by our equipment in the near future.

The condition of the spark plug can accurately determine the quality of the fuel mixture, but this will only be true if the mixture ignition system and the engine itself are still operational. And by the nature of the operation of a serviceable engine, you can pre-determine the condition of the spark plug, which can affect the diagnosis in determining faults with the same symptoms, but with different localization.

Defective spark plugs At present, they are not uncommon and anyone who has a desire to technically service their chainsaw can become the owner of such an instance.

When the candle is depressurized, the density between the insulator of the candle and its body is violated. A dark band of light oily soot around the base of the insulator will indicate this defect.

In the “best” case, the insulator can rotate in a metal case, which certainly confirms the depressurization of this candle.

Similar symptoms of malfunctions in this case are sometimes confused in determining their location.

See also  How to start the STIHL ms 180 correctly

These signs may occur when the piston rings and piston are worn; when there is a crack in the cylinder wall or deep mechanical damage and defects on the inner surface of the cylinder or the piston itself; in case of violation of the process of mixture formation, when the carburetor is disrupted or in the gaskets there are places for excess air to pass; with a low value of a high-voltage spark discharge; when using gasoline or low quality oil; when the crankshaft oil seals are worn or gases break through the gasket between the cylinder and the crankcase; during depressurization of the crankcase engine; and the most common cause of all these signs will be the under-twisting (or spontaneous unscrewing) of the spark plug.

Externally, you can inspect the place of installation of the spark plug only after removing the cover and air filter, which many do not have enough desire because of the additional fuss, they said. Fresh oily coating with a belt at the base of the candle insulator, a dirty candlestick or candle case will indicate its described defect.

Filled Candles How to Start a Saw

It can be added that in any place where there is leakage of air or gases, there will be a dirty oily coating. When the crankshaft oil seals wear, the oil seal on the flywheel side more and more often “suffers”.

Frankly, for the entire time that I have encountered motorized equipment, I only came across candles with torn central electrodes two times.

An electrode break is when the central metal rod connected to the contact lead of the plug through the glass sealant exits the thermal cone of the plug and approaches the side electrode, while reducing the gap, up to the closure of the electrodes.

And how to work with a chainsaw at lower speeds? The electrode and insulator of the candle must be heated so that they pass self-cleaning. Most likely, the breakage of the central electrode will be for candles of appropriate quality, when neglecting the standards, stamp candles with electrodes made of unalloyed nickel steel.

How much I had to observe how candles are killed with an acetylene burner, instead of cleaning them in a sandblast. Some candles could not withstand such burning and they squeezed out a contact terminal or a central electrode.

The signs of such a candle mounted on a chainsaw engine will be similar to some signs of a fuel system malfunction.

These signs are somewhat similar even when the fuel level in the tank is low; when there is damage on the fuel hose near the fuel filter. But it should be noted that with a low fuel level in the tank, the engine, in the position of the saw with the end of the tire down, may stall, previously losing power and lowering speed. Then it will start in the usual way, after a little pumping. Will work in the tire up and horizontal position.

Carbon deposit between the electrodes of the spark plug.

If you look at how the chainsaw engine works, in which the spark plug gap is clogged with soot, you will get a feeling that instead of an electronic ignition module, a timer is installed on it. The engine runs intermittently, irregularly and intermittently. Shot through a muffler and smokes periodically.

I did not work on fuel from this oil for long. The above symptoms appeared. The ratio of oil to gasoline was 1:50 and as recommended by the manufacturer (supposedly).

It is possible that gasoline contained an additive, which at a temperature gave a reaction with additives in oil, but the most interesting was in the gap of the candle. Electrical discharge jumper-grown durable soot between the electrodes of the candle, until he connected the electrodes to each other.

On a hot engine, at medium speeds, the engine runs and you can even cut small diameter firewood. But as soon as we add the load and increase the speed, the engine “dies”, “shoots” at the muffler and starts to smoke.

At average speeds of the hot engine, the fuel-air mixture entering the working chamber is also still easily ignited by a high-voltage discharge on the spark plug electrodes with carbon in the gap, although non-periodic ignition misfires are already observed. The engine “troit” and smokes a little.

When the load on the engine increases, the fuel-air mixture enters the working chamber in larger quantities and its ignition occurs less and less, since its quantity will be enough to superficially form the soot formed in the spark gap, due to which the two candle electrodes will be closed between themselves. There will be no spark discharge on the spark plug, and the output circuit of the high-voltage part of the electronic ignition module will be short-circuited.

We changed the fuel in the chainsaw to the one prepared with oil from another manufacturer, strictly in proportion, according to the recommendation. Installed a new spark plug and continued to work.

When they burnt one tank of fuel and examined the candle, they were very surprised. The candle gap was coated with some kind of viscous mass resembling either gelatin or black tar.

We will not prove the correct preparation of the fuel mixture, but the ratio of oil to gasoline here is still slightly higher than normal. Or maybe the composition of gasoline does not correspond to the selected oil, because of which the fuel mixture does not form with the optimal parameters that will correspond for the fuel to our chainsaw engine.

The next tank was filled with fuel with less oil than before. That is, not in a proportion of 20 ml of oil per 1 liter of gasoline, but only 15 ml per liter.

To be honest, we were a little worried not to screw up the engine with “dry” fuel, but fortunately, this proportion of oil to gasoline made the fuel optimal for the engine of our chainsaw. The oil turned out to be original and very good. There was almost no deposit, and the thermal cone of the candle was light coffee in color.

In addition, I want to note that the more and more soot will form on the electrodes of the spark plug and fill in the gap, the more likely it is that the electronic ignition module of the chainsaw will soon become unusable. We were convinced of this more than once.