The long-life guarantee of any hand tool is its regular periodic maintenance. Of course, you can send for service and diagnostics to special service centers, but as they say, “If you want to do well, do it yourself.” Therefore, it is worthwhile to figure out how to independently service such a tool popular among home masters as an angle grinder or angle grinder, in common people. 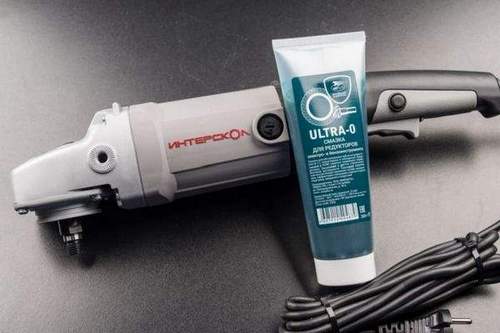 The most susceptible to wear are the moving parts of an angle grinder. These are the bearings of the anchor, gears, as well as the gears themselves located in the gearbox. The lubricant (or lubricant) laid by the manufacturer ages over time, its properties are lost, all this leads to more wear of the gears in the gearbox and, as a consequence, to increased vibration and the appearance of extraneous noise during operation. Periodic maintenance and replacement of the lubricant in the gearbox angle grinder must be carried out at least once a year.

Characteristics and features of greases for grinders

When servicing any hand tools with moving parts, a lubricant is used that has the following characteristics and features:

READ  How To Check The Rotor Angle Grinder

Almost all world tool manufacturers require their recommended “own” lubricant sold under its brand. In principle, this is correct. The grease used for the gearbox angle grinder, in this case is tested at the factory, it gives a guarantee of long-term and correct operation of the angle grinder. However, there are drawbacks, which are in the high price of the lubricant from these brands.

In addition to the original oils, there are many lubricants on the market that are produced by third-party manufacturers, so the question of what exactly to lubricate the reducer with an angle grinder is not acute.

The products of Haskey, Castrol, Liqui Moly and others have shown themselves to be good for adding to an angle grinder.

Russian manufacturers also do not lag behind foreign ones and offer their products. So, the grease of a bevel gear reducer is an angle grinder from the company Nanotech. Of course, such a lubricant for the gearbox is not original and recommended by the manufacturer, therefore, if used, subsequent warranty repairs may simply be refused.

After the choice of lubricant for the angle grinder is made, proceed directly to the maintenance of the tool. The correct maintenance process for an angle grinder consists of several steps. First you need to open the gearbox, then remove the old lubricant, apply a new one, check the correct application. Removing the old grease is necessary for the reason that when mixed with a new one, it will not allow it to work correctly and the entire maintenance procedure will not bring any result.

When to change grease in an angle grinder

The frequency of lubricant change depends on how often and under what loads the tool is operated. As a rule, this period is about a year. In the case of intensive operation with frequent overheating, the frequency of replacement is reduced to six months, sometimes more often.

For maintenance, you will need to disassemble the angle grinder gearbox by unscrewing 4 screws on its cover.

After removing the cover, you can see two bevel helical gears: a large and a small gear. The small gear is anchored and drives the large gear. The large one, in turn, is seated on the secondary shaft, to which a cutting or grinding disc is attached.

How to remove old grease in an angle grinder

The disassembled gear angular grinder must be well cleaned of the old lubricant. It no longer fulfills its functions, plus solid particles have already accumulated in it, resulting from wear of moving parts. When mixed with new, old lubricant also significantly degrades its performance. Therefore, the gearbox and gears must be thoroughly cleaned.

READ  Which 125 Angle Grinder Is Best For The Home

Removing old grease from the gearbox

Old grease is removed with a rag, paper towel or just a rag. Removed parts can also be washed in gasoline or thinner. The washed parts must be thoroughly dried before assembly. Residues of solvent or gasoline will mix with the new grease and change its consistency, which again worsens its performance.

Before applying a new lubricant, it must be thoroughly mixed and monitored so that there are no lumps or foreign objects in it. A thin layer of lubricant is applied to the gears, making sure that it completely covers the teeth. It is more convenient to fill the grease inside the bearings with a syringe. Then the grease intended for the angle grinder is driven into the gear housing. This is necessary for the reason that during operation it can fly off the gears and with a small number of gears, the gears will work “dry”.

The amount of lubricant placed in the gearbox must be such that the oblique teeth of the gears are completely covered by it. Excess will cause it to squeeze out from under the cover, and an insufficient amount will not ensure the correct operation of the gearbox.

It is best to focus on the amount that was planted at the manufacturer of the angle grinder, but remember that the grease can dry out, while decreasing in volume.

In this regard, it is better to put a little more and check the correct distribution of the lubricant after turning on the angle grinder. In general, the amount of lubricant is usually approximately 30-50% of the full capacity of the gearbox.

Checking the correct application of lubricant to the gearbox angle grinder

The last step during the maintenance of the angle grinder is to check the correct application and distribution of the lubricant inside the gearbox. To do this, after the gear unit is assembled, the power tool is turned on without load for several minutes, while it should be ensured that there are no extraneous sounds, odors and other things. If they occur, you must immediately disconnect the angle grinder from the network. The heating of the gear unit is also checked. The lubricant must distribute the heat evenly and the temperature of the gear unit must not be very high.

After a short operation, unscrew 4 screws, then remove the cover from the gearbox. Visually inspect helical gears for grease. If it is absent, it means that too little lubricant has been incorporated and should be reported. If in the process of work it is squeezed out of the cracks, then it means it was laid too much and the excess should be removed. After making any changes, the operation of the angle grinder without load is again checked.

Earlier it was said that there are many types of lubricants both from a foreign manufacturer and from a domestic one. Good lubricant for power tool gearboxes is available from Bosh. It is called “Grease for gearboxes” and is packaged in tubes of 65 grams. One such tube is enough for a few maintenance angular grinder.

From the lubricants intended for the reducer to the angle grinder manufactured by the domestic manufacturer, one can recommend the products of the company Nanotek. It is called “Nanotek MetalPlak Electra” and is designed for tools that work with intense load. Shrus or Tsiatim-221 are also widely used from domestic lubricants, however, they require preliminary preparation and, in fact, are a home-made lubricant.

DIY grease for gears angle grinder consists of a base and thinner. The basis for homemade lubrication is usually SHRUS with molybdenum disulfide or Tsiatim-221. They have a second viscosity according to NLGI, therefore, for use in the reducer of an angle grinder, the base must be diluted. As a diluent, it is best to use a simple mineral industrial oil, which, for example, is I-20 oil. To obtain an NLGI 0 viscosity, approximately 70 percent base and 30 percent diluent will need to be mixed. The resulting mixture is thoroughly mixed and ready to be applied to the gears and bearings of an angle grinder.

Timely maintenance of any electric tool is the key to long-term and trouble-free operation. A properly working tool is also a guarantee of safety for the person using it. Using the tips given above, everyone can correctly choose the lubricant for the gearbox angle grinder and replace it without resorting to the help of expensive service centers for servicing power tools.