When drilling holes with a perforator, the main factor is not the rotation of the drill, but the impact. Both drilling speed and the ability of a tool to cope with particularly hard building materials (concrete, granite and others) depend on its strength.

Dust and constant loads on the tool adversely affect its operation. During operation, the impact force can significantly decrease or disappear altogether.

How does a hammer drill work and why does it “refuse” to hammer?

Most modern rotary hammers have an electro-pneumatic impact mechanism. “Electro”. Because the mechanics are driven by an electric motor, and “pneumatic” means that the hammer striking the shank of the drill is driven by air. 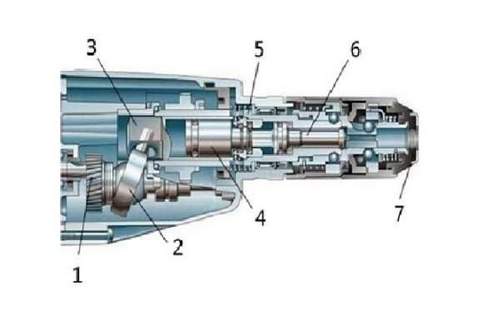 When the button is pressed, the engine transmits rotation to the shaft with a “drunk” bearing, which in turn drives the piston inside the barrel. When the piston moves forward, air pressure increases between it and the hammer. The drummer moves towards the striker and hits it. The hammer transfers the energy of the impact to the drill. Then the piston moves in the opposite direction, creating a rarefaction area in the barrel. Due to this, the drummer returns to its original position, after which the entire cycle is repeated.

Most rotary hammers have two or three operating modes:

Reasons for no strike

At first glance, it seems that the percussion mechanism has a simple structure, and there’s nothing to break. The load, dust and vibration gradually take their toll. Typically, the impact force decreases as the mechanism wears out and eventually fades away. The sharp disappearance of the impact is due to the deformation or destruction of some parts.

These parts are made of high strength steel. The striker rarely breaks down, but the sleeve in which it moves absorbs part of the shock energy and collapses over time. The fragments jam the firing pin, and the puncher stops beating.

The drummer (“flying piston”) has a compression ring. When it is worn, part of the air passes into the gap between the cylinder in the barrel and the hammer. The more wear, the weaker the blow. The problem is solved by replacing the ring with a new one.

READ  What Is An Impact Screwdriver For?

Sometimes the shock of the “flying piston” is broken on the firing pin. Usually this is the result of pressure on the punch while drilling holes. The drilling speed does not increase, but the load on the mechanism increases, which accelerates wear. Repair consists in chamfering the emery machine or replacing the part.

It is mounted on the shaft at an angle and drives the piston. In the presence of development or destruction of the bearing must be replaced.

Parts of the mechanism may come out of the guide grooves. This may be due to deformation, wear, or frequent use of the tool with a not fully included mode. The malfunction is eliminated by installing parts in their places or replacing them with new ones.

Untimely grease changes can also cause no shock. Work with a rotary hammer implies the presence of dust, which does not affect the properties of lubricants in the best way. Dust can clog holes in the cylinder designed to circulate air during the operation of the percussion mechanism. The same effect is not excluded when using too thick grease, not intended for perforators.

READ  By What Parameters To Choose A Punch

What to do if there is no blow in the punch

If the tool refuses to hammer, it is not necessary to disassemble it immediately or plan a trip to the service. Sometimes the reasons for refusal can be elementary.

On some rock drill models, impact mode is blocked by reverse. It is enough to move the lever to the desired position. A similar effect can be from not fully rotated mode switch.

When drilling vertically, dust and small fragments can clog the cartridge and hammer under the drill. Having taken out the drill, it is necessary to clean the cartridge from debris and push the hammer down.

Using cheap consumables can also cause a malfunction. The shank of a poor-quality drill sometimes turns out to be riveted in the form of a “fungus” inside the cartridge. It is not always possible to extract such a drill without disassembling the cartridge.

High-quality consumables, timely prevention and maintenance are guaranteed to eliminate tool failure at the most inopportune moment. If there are hints of a malfunction, it is better to immediately contact the service or, if you have experience, repair it yourself.