How Much Grease To Put In The Gearbox Angle Grinder

The Sparky Angle Grinder is the next author shows the cause of one-sided spindle rotation and a way to eliminate the defect. The collapsed rotor bearing with a support in the gearbox housing caused its distortion, which contributed to damage to the aluminum case in the form of chipped shavings. With the help of pullers and a wooden drift, the author easily copes with disassembling the gearbox and replacing both bearings on the rotor supports.

A design feature of one of the DeWalt models is the design of the gear housing. The cover does not have any additional functions here., except for protection against the ingress of abrasive particles. The flange, where the bearing unit is located, is made as a whole with the housing.

Usually, when replacing any structural element (in this case, brushes), in most cases grease is replaced in the gearbox. For this, a complete disassembly of the DeWalt angle grinder is carried out with the removal of the rotor, so that it is convenient to rinse and clean the gearbox cavity from old grease.

Another feature of the DeWalt angle grinder is driven large gear design. A tapered insert inside the gear housing prevents overloading. The clamping force of the tapered insert is adjusted to work at permissible loads. With increased effort, the gear will slide on the tapered surface.

For convenience when changing the oil, the author uses a measured syringe. Here it is easy to control the amount of lubricant required for filling.

How to pull the anchor

To repair the gearbox, it is often necessary to perform its complete disassembly with release from the rotor. In some types of grinder models, this is not so easy to do. The following guidelines provide guidance on how use the inertial properties of the rotor for this purpose.

In the first, the basis for performing work is locksmith vice, and in the second from a suitable square tube a small device is made. After lightly tapping the gearbox housing against the edges of the vise or pipe, the rotor is released from the gearbox. Which method is better. The user’s choice.

READ  How to Sharpen a Drill For Metal Angle Grinder

When to change the lubricant in an angle grinder

The frequency of changing the lubricant depends on how often and under what load the tool is used. Typically, this interval is about a year. In the case of intensive use with frequent overheating, the replacement frequency is reduced to six months, sometimes more often.

After removing the cover, you can see two bevel helical gears: a large and a small gear. The small gear is anchored and drives the large gear. The large, in turn, is planted on the secondary shaft, to which the cutting or grinding disc is attached.

How to properly remove old grease in an angle grinder

The disassembled angle grinder gearbox must be well cleaned of old lubricant. It no longer fulfills its functions, plus solid particles have already accumulated in it, resulting from wear of moving parts. Mixing with new, old lubricant also significantly degrades its performance. Therefore, the gearbox and gears must be thoroughly cleaned. 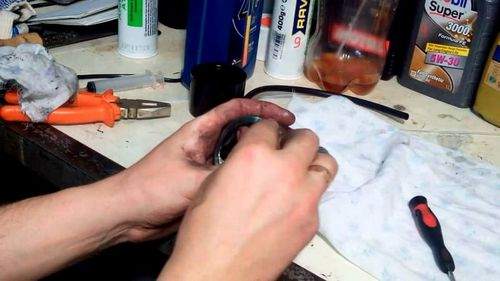 Removing old grease from the gearbox

Remove old grease with a rag, paper towel, or just a rag. The removed parts can also be washed in gasoline or thinner. The washed parts must be thoroughly dried before assembly. Residual solvent or gasoline will mix with the new grease and change its consistency, which will again impair its performance.

After the choice of lubricant for the angle grinder is made, proceed directly to the maintenance of the tool. Correct maintenance of an angle grinder consists of several steps. First you need to open the gearbox, then remove the old lubricant, apply a new one, check the correct application. Removing the old grease is necessary for the reason that mixing with new grease will prevent it from working properly and the entire maintenance procedure will not bring any result.

Surely you will not compare the word “angle grinder” with a citizen of sunny Bulgaria, but immediately remember about the angle grinder, which forever secured this name. This is understandable, because this term came into our use back in the 70s, when such an instrument was produced exclusively on the territory of Bulgaria.

Since then, the angle grinder has not only not lost its importance, but, on the contrary, has become even more efficient, safer and more durable. Thanks to its enormous functionality and ability to work with different types of material (metal, concrete, stone, brick, tile, etc.), it has become an integral part of any major overhaul or construction.

READ  Per Liter Of Gasoline How Much Oil Trimmer Is Needed

However, given the high workload of the tool, in the process of use, inaccuracies in its operation may occur, which can lead to quite unforeseen and unpleasant consequences. Therefore, if you want the device to serve you for a long time to the maximum of its capabilities, you need to approach its maintenance more than seriously.

Of course, the right decision would be to take the equipment to a service center, where it will be diagnosed and repaired by experienced specialists. But this option will be relevant if the warranty period has not yet expired, and if you are not limited in time. For the rest, you have to learn the device and make repairs yourself.

There is a lot of information on the Internet (including), where the process of disassembling, cleaning and lubricating the main structural elements of the angle grinder is described in stages. For example, to get to the gearbox, it is not necessary to completely disassemble it, it is enough to unscrew a few screws. And even though this process is relatively simple, it requires strict adherence to instructions, as well as accuracy, precision and care.

Before you start dismantling the tool, you need to study its internal components in detail.

The main body is made of shockproof plastic.
Side handle for comfortable holding of equipment during operation.
Start buttons.
Spindle lock buttons for quick disc replacement.
An electric motor, which includes a rotor and stator.
Reliable gearbox.
Speed ​​control wheels (not for all models).
Super-Joint-System (not available on all models).
Nuts for fixing the working element.
Wide protective cover.
Power cable or battery pack.

Disassembly of the gearbox angle grinder

The angle grinder gearbox is responsible for transmitting the rotational motion from the rotor of the electric motor to the working element. With the optimal rotation speed and the correct selection of the wheel diameter, you get a tool tuned for the most productive and efficient work.

The design of the gearbox consists of a bearing, a large and a driven gear. As for the body, in most cases it is made of high-quality aluminum alloy, on the base of which there are several threaded connections for fixing the side handle.

One Phillips screwdriver will be enough to remove the gear mechanism.

The first thing to do. Remove the working disc and the protective cover from the spindle.
Then unscrew the bolts that secure the angle grinder body and the gear mechanism. Typically, it is held in place by four screws.
Take out the gearbox and assess its internal state.

READ  How Much Fishing Line Need To Trimmer

How to determine when a relubrication is required in the angle grinder gearbox?

Check teeth and gears for damage or wear. If you notice an excess of grease, which, under the influence of centrifugal force, has completely settled on the walls of the housing, then with its normal quality, you can reapply a thick layer to the gear teeth. If the oil is out of date, it should be completely replaced. To do this, thoroughly flush the gearbox with kerosene or another volatile solvent.

It is also worth considering the fact that in the process of intensive work, the lubricant can overheat, which will lead to its increased evaporation and, consequently, deterioration of the equipment. For example, if you notice an increased noise coming from the device, then surely there is not enough oil in the gearbox and it is necessary to relubricate.

How much grease to use

The amount of lubricant can be easily determined by eye. It should be slightly less than half of the total volume of the gearbox. After you have squeezed out the necessary part of the composition, spread it over all rubbing surfaces of the parts.

Which lubricant is best to use

According to experts, it is best to use a lubricant of the same brand as the tool. For example, if you use TM Makita equipment in your work, then the lubricant should also be from this manufacturer, since its production takes into account the characteristics of your equipment. Thus, you can save the device from premature failure, maximizing its service life.

However, there is a significant disadvantage in this. The price of branded formulations is quite high, which is why many people refrain from buying, preferring cheaper materials.

In addition, a large number of craftsmen use inexpensive Chinese equipment in their work, for which lubrication is not provided. However, it, like all electrical equipment, requires periodic maintenance.

What we would strongly discourage you from using is lithol or solidol. Since they are not designed to work under conditions of strong friction and high temperatures. The use of such materials leads to premature wear of the equipment and, therefore, to its breakdown.

How often to lubricate

If the tool is used intensively, then its prevention is recommended to be done every year. Since the gearbox is a rather complex mechanism that has to withstand regular heavy loads, dust can form in its internal component. With timely and correct lubrication, you will provide your device with guaranteed stable operation and a long service life.