How to Adjust a Carburetor On a Chainsaw 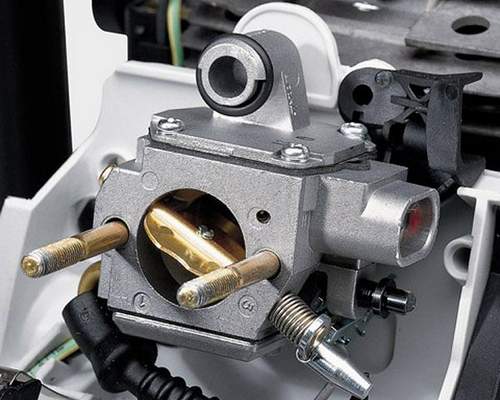 The internal combustion engine works by burning a pre-prepared mixture of air, oil and gasoline. Chainsaw carburetor adjustment is needed to prepare the mixture in the required proportion. It depends on the operation of the carburetor whether the engine will work with the declared power or stall.

Regardless of the manufacturer, the principle and operating procedure of the carburetor of internal combustion engines is the same. For mixing air and fuel, the carburetor is a device that includes:

Air at atmospheric pressure, passing the air purifier, is fed into the narrowing zone, where its flow rate is regulated by an overlapping, flat damper. After constriction, a vacuum occurs in the pipe. As a result, the vacuum draws in fuel from the fuel supply pipe, the output of which is regulated by a fuel needle connected to the float chamber by a jet. The carburetor device of the chainsaw, in principle, does not differ from other mixers of fuel of internal combustion engines.

The principle of mixing is to control the air damper, the level of the float, depending on the degree of vacuum. We open air. fuel comes in, the engine increases speed. The correct ratio of the combustible mixture depends on the precise adjustment of the carburetor of the chainsaw. If there is a lot of air in the fuel, power drops, the mixture is called lean. With a lack of air there is a large fuel consumption, incomplete combustion, carbon deposits on the cylinder and the exhaust of unburned fuel. This says the mixture is oversaturated.

READ  What Kind Of Oil For Chainsaw Husqvarna

The Ural chainsaw, according to the instructions, requires a run-in using an enriched fuel mixture. Therefore, the carburetor from the factory comes with a setting for the break-in period. Upon transition to the operating mode, the node is reconfigured.

When carb adjustment is required

The new chainsaw is adjusted to the recommended mix. Only fine-tuning with three screws will be required, no carburetor needs to be disassembled. Purpose of adjusting screws:

Since the adjustment of the saw carburetor occurs by ear when the engine is running, safety measures must be observed. The saw needs to be positioned steadily with cutters pointing in a direction that is safe for those present.

Prior to the start of manipulations, it is necessary to mark the initial position of the screws with a paint or felt-tip pen. The exact settings for the carburetor of the chainsaw for each model are in the instruction manual.

However, it is often necessary to tune the carburetor after eliminating a malfunction in the tool. The reasons may be:

READ  What Oil Is Pouring To Lubricate A Chainsaw Chain

How to adjust the carburetor on a chainsaw of a specific model? Perform operations sequentially, guided by the instructions. Here is the algorithm, the general sequence of actions.

There are two stages of configuration:

The basic setting is only for the low and high speed fuel feed screws. Smoothly slowly, completely shut the shutters to the stop. Also gently open counterclockwise both screws 1.5 turns. After that, start the engine and warm it up for 10 minutes.

How to set up a carburetor on a chainsaw with the engine running:

How to find a carb fault

However, adjustment may be preceded by repairs to the carburetor itself when it cannot fulfill its function as a fuel mixer.

If fuel for some reason does not enter the engine, check the condition of the fuel supply unit. Often the reason is the supply of low-quality gasoline, as a result, fuel moves become clogged.

READ  How To Start A Chainsaw Without A Starter

If the fuel mixture has stood for a long time, the additives have collapsed, the mixture may clog up the passages, grate with sediment. In this case, a long flush is required, which is done with solvents in a service workshop.

If troubleshooting is done with your own hands, you need to free up space and decompose small parts. Need a tool:

The main thing is to properly release the unit from the installation site, cleaning it from the outside of dirt. The air intake is removed, giving access to the carburetor and the suction draft. Remove the accelerator lever by lowering the carburetor damper. Release the part by removing the suction lever, lifting the wire together with the lever, hooking it to the left.

Rinse the freed carburetor in gasoline, blow it with air, clean the grate, making the injection a thin needle.

When reassembling the assembly, make sure that the spring under the needle lever is in place. If you forget it, the fuel does not cut off, the candle is damp and does not give a spark.

Having assembled the carburetor, replacing it, carry out the adjustment as described above.