How to Adjust Turns to Angle Grinder

If your arsenal has an old angle grinder, do not rush to write it off. Using a simple electrical circuit, the device can be easily upgraded by adding to it the function of changing the speed. Thanks to a simple regulator that can be assembled with your own hands in a few hours, the functionality of the device will increase significantly. By reducing the speed, the angle grinder can be used as a grinding and grinding machine for various types of materials. There are new opportunities for the use of additional nozzles and accessories.

Why is the angle grinder low revs?

The built-in disc speed control allows delicate processing of materials such as plastic or wood. At low speeds, comfort and safety are enhanced. Such a function is especially useful in electrical and radio installation practice, in car services and restoration workshops.

In addition, among professional users of power tools, there is a strong opinion that the simpler the device is built, the more reliable it is. And the additional service “stuffing” is better to move outside the power unit. In this situation, the repair of equipment is greatly simplified. Therefore, some companies specifically produce remote separate electronic regulators that connect to the power cord of the machine.

Speed ​​control and soft start. What are you for?

In modern angle grinders, two important functions are used that increase the reliability and safety of the tool:

They are used in electromechanical tools, the design of which uses a commutator motor. Contribute to reducing wear on the mechanical part of the unit during start-up. Reduce the load on the electrical elements of the mechanism, starting them up gradually.

As studies of the properties of materials have shown, the most intensive production of rubbing nodes occurs during a sharp transition from a rest state to a fast movement mode. For example, one start of an internal combustion engine in a car is equivalent in wear to the piston group to 700 km.

When the power is turned on, an abrupt transition occurs from the rest state to disk rotation at a speed of 2.5-10 thousand revolutions per minute. Those who worked with an angle grinder are well aware of the feeling that the machine is simply “breaking free”. It is at this moment that the overwhelming number of breakdowns associated with the mechanical part of the unit occurs.

READ  How to Unscrew a Disc From an Angle Grinder

The stator and rotor windings experience no less load. The collector motor starts in short circuit mode, the electromotive force is already pushing the shaft forward, but the inertia still does not allow it to rotate. There is a jump in the starting current in the coils of the electric motor. And although they are structurally designed for such work, sooner or later there comes a moment (for example, when a voltage surge in the network), when the insulation of the winding does not withstand and an interturn circuit occurs.

When you include softstarts and changes in the engine speed in the tool’s circuitry, all of the above problems automatically disappear. Among other things, the problem of “failure” of voltage in the common network at the time of starting the hand tool is being solved. This means that the refrigerator, television or computer will not be at risk of “burnout”. A safety circuit breaker on the meter will not work and turn off the current in the house or apartment.

The soft start circuit is used in angle grinders of medium and high price categories, the speed control unit is mainly used in professional angle grinders.

Adjusting the speed allows you to process soft materials with the angle grinder, to perform fine grinding and polishing. At high speed, the wood or paint will simply burn out.

Additional electrical circuits increase the cost of the tool, but increase the service life and the level of safety during operation.

How to assemble a regulator circuit with your own hands

The simplest power regulator, suitable for an angle grinder, soldering iron or light bulb, is easy to assemble with your own hands.

In order to assemble the simplest speed controller for an angle grinder, you need to purchase the parts shown in this diagram.

Trimmer resistor VR1 changes the charge time of capacitor C1. When voltage is applied to the circuit, at the first moment of time (the first half-cycle of the input sinusoid), the triac DB3 and TRIAC are closed. The output voltage is zero. The capacitor C1 is charging, the voltage on it increases. At a certain point in time specified by the circuit R1-VR1, the voltage across the capacitor exceeds the threshold for opening the triac DB3, the triac opens. The voltage from the capacitor is transmitted to the control electrode of the TRIAC triac, which also opens. A current flows through the open triac. At the beginning of the second half-cycle the sinusoids triacs are closed until the capacitor C1 is recharged in the opposite direction. Thus, the output is a pulse signal of complex shape, the amplitude of which depends on the operating time of the circuit C1-VR1-R1.

An electrical circuit is assembled on a printed circuit board or wall mount.

How to connect the device to an angle grinder, options

The connection of the controller depends on what type of device is selected. If a simple circuit is used, it is enough to mount it in the power supply channel of the power tool.

Installing a homemade board

There are no ready-made recipes for installation. Everyone who has decided to equip the angle grinder with a regulator disposes it in accordance with his goals and model of the instrument. Someone inserts the device into the handle of the holder, someone into a special additional box on the case.

In various models, the space inside the case of the angle grinder may be different. Some have enough free space to install a control unit. In others, you have to take it to the surface and fix it in another way. But the trick is that, as a rule, there is always a certain cavity in the back of the instrument. It is intended for air circulation and cooling.

Usually this is where the factory speed controller is located. A self-made circuit can be placed in this space. In order for the regulator not to burn out, the thyristors should be installed on the radiator.

Features of the installation of the finished unit

When buying and installing a factory regulator inside an angle grinder, most often you have to modify the case. Cut a hole in it for the output of the adjustment wheel. But this can adversely affect the stiffness of the casing. Therefore, it is preferable to install the device outside.

The numbers on the adjusting wheel indicate the number of spindle revolutions. The value is not absolute, but conditional. “1”. The minimum speed, “9”. The maximum. The remaining numbers are used to guide the regulation. The location of the wheel on the housing is different. For example, on a Bosch PWS 1300–125 CE, Wortex AG 1213–1 E or Watt WWS-900 angle grinder, it is located at the base of the handle. In other models, such as the Makita 9565 CVL, the adjusting wheel is located at the end of the casing.

The connection diagram of the regulator to the angle grinder is not complicated, but sometimes it is not so easy to stretch the cables to the button, which is located on the other end of the device. The problem can be solved by selecting the optimal wire cross-section or outputting it to the surface of the casing.

A good option is to install the controller on the surface of the device or mount it to a network cable. It does not always work out on the first try, sometimes the device has to be tested, and then some adjustments are made. And this is easier to do when access to its elements is open.

Important! If there is no experience with electrical circuits, it is advisable to purchase a ready-made factory regulator or angle grinder equipped with this function.

The basic rule during operation of an angle grinder with a homemade speed controller is compliance with the operating and resting conditions. The fact is that an engine operating at a “regulated” voltage is especially hot. When grinding at low speeds, it is important to take frequent breaks so that the collector windings do not burn out.

It is also not recommended to turn on the tool if the speed control is set to a minimum. A reduced voltage is not enough to scroll the rotor, the collector lamellas will remain in short circuit mode, the windings will start to overheat. Unscrew the variable resistor to maximum, then by turning on the angle grinder, reduce the speed to the desired value.

Compliance with the correct order of inclusion and adjustment will allow you to operate the angle grinder for an unlimited time.

In addition, it should be understood that the speed control for the angle grinder is carried out according to the principle of a water tap. The device does not increase the number of revolutions, it can only lower them. From this it follows that if the maximum rated speed is 3000 rpm, then when the speed controller is connected, the angle grinder will work in a range lower than the maximum speed.

Attention! If the angle grinder already contains electronic circuits, for example, it is already equipped with a speed controller, then the thyristor controller will not work. The internal circuits of the device simply will not turn on. 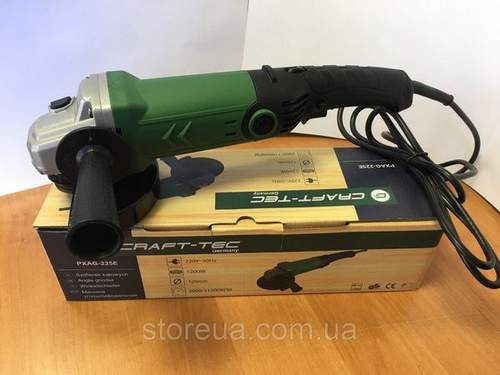 Equipping an angle grinder with an engine speed control circuit will increase the efficiency of using the device. And expand its functional range. It will also save the technological resource of the grinding machine and increase its service life.