How to Change a Fishing Line In a Trimmer

The trimmer is the most common unit used for cutting grass and cutting small bushes. This unit is notable for its ease of maintenance, simple operation during operation, and even women can cope with it due to its low weight. It is no secret that for the high-quality performance of mowing grass, the correct selection of cutting tools is required. As the last in trimmers, special cutting nozzles (discs, knives) or trimmer heads with fishing line inside are used. Nozzles and fishing line is a consumable tool, but if the knives can be sharpened, then when the fishing line is used, it needs to be replaced. In this article, we will describe in as much detail as possible how to replace the fishing line correctly.

The grass mowing head is a cylindrical body in which a reel (bobbin) with a fishing line (cord) tucked into it is inserted. This design can be installed on both gasoline and electric trimmers. The heads differ in the method of filling and feeding the cord and there are 3 types.

Based on the above, semi-automatic bobbins are the best option. It should also be noted that the coils for the trimmer are single-string (used only for trimming grass) and double-string, which are used to mow tall grass and small, with thin stems of shrubs.

How to remove and disassemble the coil

Before starting the process of replacing the cord, users of trimmers need to remove and disassemble the coil. Consider how to do this.

The mowing head of the trimmer consists of several parts: a casing, springs (not on all models), bobbins with cord and covers. 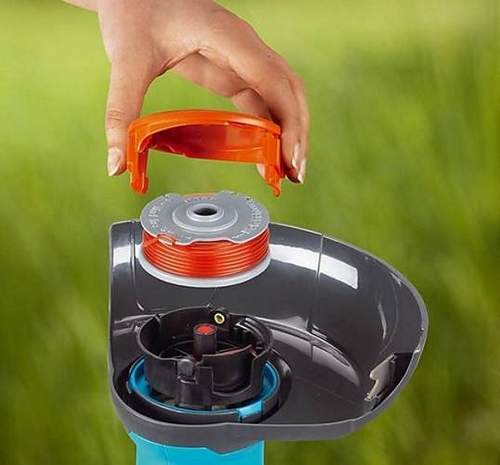 In trimmers, 2 options for attaching the mowing head are most often used.

To remove the trimmer head, you will need it complete disassembly.

In this embodiment, the head is screwed onto the gear shaft. To take it off, you need this lock the shaft. To do this, in such trimmers, for example, in Huter and Champion devices, a hole is provided through which you can insert either a thin screwdriver or a metal rod.

Depending on which trimmer model is used, the type, thickness and length of the fishing line are selected. The diameter of the cord can be from 1.2 to 4 mm. It is not difficult to guess that the thicker you fill the cord, the more rigid and thick grass it can cut.

In most cases, a universal fishing line with a diameter of 2 mm is used.

There are 3 ways to find out what diameter of fishing line can be used on your mower.

The line is wound on a reel located in the mowing head. Therefore, you must first open it (this was discussed above). There are 2 ways to wind the cord.

In order to correctly determine how many meters of fishing line is needed for a particular reel, it is necessary to wind it on a bobbin so that the coil does not exceed the diameter of the sides. If the fishing line peeks over the edges of the reel, you cannot insert it into the casing. After you have decided on the length of the material, it must be loaded into the bobbin, so do the following.

In some coils, a second way of securing the cord is provided: 2 pieces of thread can be charged, instead of one folded in half. Replacing the fishing line occurs according to the following algorithm.

For Shtil lawn mowers There is a very simple and quick way to replace the fishing line without disassembling the mowing head, which you can familiarize yourself with by watching this.

The ends of the cord protruding from the holes in the casing can be cut to the required length when the part is installed in the trimmer. There are two ways to do this:

The second method is used if it was necessary to put a cord of large diameter, and a cutter cannot shorten it.

If the thread was charged into the mowing head, but the length of the protruding ends of the cord is insufficient, then they must be lengthened before starting the machine. This applies to the head with manual adjustment. However, there are cases when using a semi-automatic mowing head, when due to the insufficient length of the protruding ends of the cord, they do not automatically extend. In this case, it is necessary to turn off the unit (it is absolutely necessary to pull the plug out of the socket on the electric apparatus), manually press the button located at the bottom of the part, and pull out a little fishing line. After this procedure, the cord will again be able to extend due to centrifugal force, if you set the maximum spindle speed.

No matter what thickness you put the line, you should remember: in order not to interrupt the work and change the cord, you should avoid areas where the working tool can touch hard surfaces (stones, curbs, thick dry branches, etc.).

What can be used instead of fishing line

Many users of trimmers are wondering: what can replace the default cord used in this kind of apparatus? They begin to conduct unsafe experiments by installing metal or copper wire, metal cables or strings, as well as ordinary fishing line in the mowing head.

If set instead of fishing line metal cable, then the trimmer turns into a dangerous device not only for the user, but also for others. This fact is explained by the fact that during operation of the unit the steel cable will gradually work, its ends will unravel, and small pieces of wire will fly apart in different directions at high speed.

A similar thing happens when using steel or copper wire, only with the difference that the pieces that come off will be larger and can cause serious injury.

And if you accidentally hook your own or someone else’s foot while operating the machine with a steel cable (wire), then a strong and deep cut of the tissues, and in some cases amputation of your toes, is provided. It is not in vain that the manufacturer uses nylon for these purposes, since it is quite light and durable, and when detached it does not fly away and cannot cause injury.

Use fishing line in the trimmer instead of the standard one, of course, it is possible, but this will add you unnecessary trouble, because it wears out quickly, breaks, mows slowly and is not suitable for cutting hard grass. In addition, when carrying out work, a lot of time is lost in order to replace a broken tool more than once.

In practice, the installation of an ordinary fishing line is justified if the user is going to mow the grass near the fence, especially if he is from a netting net. In this case, in order to protect the standard, and sometimes expensive cord from wear, it is changed to a fishing line, which is not AL-KO. Usually, in order to change the cord to the fishing line, it needs to be selected with the greatest thickness. 2-3 mm.

Replacing fishing line with a disc or knife

When refining a garden plot, park areas and other places where it is necessary to mow various kinds of plants, it is often necessary to change the cutting tool in the trimmer. This is dictated by the fact that the standard cord installed in the mowing head can only cope with herbs. But when a shrubbery or young shoot of trees appears on the way of the worker, the fishing line cannot cope with such a task, and its change to a more effective cutting tool is required.

Manufacturers of trimmers provided for such situations, and supplemented their products with a mass of nozzles in the form of knives with several “petals” or in the form of disks similar to circular saws.

If you replace the fishing line with a knife with several “petals”, then with such a tool you can mow both tall grass and plants with thick and dry stems. And changing the fishing line to the disk, the user has the opportunity to lawn mowers to cut shrubs or small trees.

Knives and wheels are installed according to the following algorithm.

For a better understanding of the tool change process, you can watch this.

Users of trimmers, both gasoline and electric, sometimes have problems with the cord. “Advanced” owners of mowers can easily cope with the difficulties encountered, understanding why this is happening, and for beginners, this is a problem that does not have a rational explanation. But in fact, everything is solved quite simply. The most common problems that happen with fishing line are as follows.

If the line is often torn, the following reasons can cause it:

Basically, a cord ends quickly if often pounding the ground with a semi-automatic head or push it down hard. The reel is unlocked, and the fishing line, lengthening, is cut with a knife. Another reason that the cord ends quickly is the improper operation of the machine with an automatic head: when mowing, the user often drops engine speed. But as we remember, the automatic head is designed so that it is with each decrease in speed that a new portion of fishing line is fed, so it is quickly consumed.

It happens that the thread is unwound if in a semi-automatic head the spring has loosened. The fishing line is constantly extended and cut with a knife mounted on the casing, which increases its consumption. To check this, remove the cover and turn on the unit. If the fishing line “climbed”, then you need to replace the spring.

The reason that the cord unwinds after starting the unit can also be the weakening of the spring inside the head. In addition, there are times when the mowing head scatters when the unit is turned on, and the spring installed in it is lost. Inexperienced users do not notice the absence of a spring and assemble this unit without it. Therefore, the cord does not hold, and flies out under the influence of centrifugal force.

Cord not feeding, coil not spinning

An automatic or semi-automatic head should feed the line without stopping the unit. But if it does not come out, then the reasons may be the following:

The thread sticks together

This trouble is most often due to use of low-quality cord. When the machine is operating, the trimmer head heats up, and the poor-quality fishing line in it melts, sticking together. Also, sintering of threads occurs when a fishing line meets a solid obstacle. In this case, a sharp braking of the cord occurs, after which it is pulled into the head, where it is attached. Some owners of the units recommend lubricating the cord with mineral oil or spraying it with silicone spray after winding on a bobbin. Others advise winding less thread on a bobbin. But it is better to immediately buy a quality product, in the manufacture of which the manufacturer took into account the factor of overheating of the head, and the thread will not stick together.