How to Change a Fishing Line On a Trimmer Correctly

The trimmer is a convenient and easy-to-use tool for mowing grass and pruning small bushes and trees. As a cutting element, it is often used fishing line (string, cord), because it costs less than blade knives and is safer to use. With intensive use of the tool over time, you will need to change the line on the trimmer. This process is similar on mowers from different manufacturers, be it Husqvarna or Huter, with possible minor differences.

What is needed to replace the cord

When the trimmer is used regularly for grass mowing, the discs become dull, but they can be sharpened and continued to be used. The fishing line in the reel tends to end, so there is a need to refuel a new one, for which you need to determine the type of head and prepare a cord of the required thickness and length. 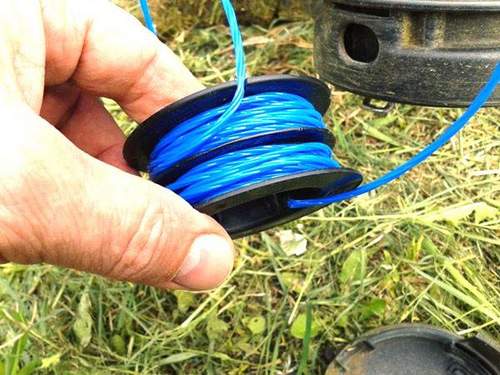 So, the mowing head is a cylindrical body in which a bobbin with fishing line is placed. Such a detail is present both on trimmers and on gasoline braids of any brands, be it Bosch, Makita, Stihl or another brand. The heads are of three types, depending on the method of refueling and feeding the fishing line.

On a note! The most convenient and best priced are semi-automatic cord reels.

Before replacing the fishing line, you need to pull out and then disassemble the head. Usually it includes a casing, a spring (on some models), a bobbin with fishing line, a cover. It is necessary to disconnect the electric trimmer from the network (or muffle the gasoline), and then proceed to remove the coil. It can be fixed in two different ways: in the first case, it is necessary to completely disassemble the head, and in the second. Just remove it from the gearbox shaft on which it is mounted.

Second way involves the following actions. The coil head is mounted on the gearbox shaft. To disconnect it, it is necessary to lock this shaft. Usually in braids, for example, of the Champion or Stihl brand, a hole is made for this, into which a nail, a rod or a screwdriver is inserted. After fixing the shaft in a stationary position, holding the housing, it is necessary to start turning the head clockwise, since the thread on the shaft is usually applied left.

Now that the head is removed and disassembled, it is necessary to determine how thick the cord should be. You can find out the suitable diameter for your trimmer by looking in the user manual or on the bobbin itself, usually similar information is indicated on it. Another way is to insert the thread into the hole from which it is fed. If the scrum goes without difficulty, it can be used for work.

On a note! To understand how much fishing line to reel for the reel, you need to wind it on a bobbin so that the height of the reel is not greater than the diameter of the sides. If the cord protrudes beyond the edges, the coil cannot be hidden in the casing.

The order of winding the fishing line depends on the type of reel. With one or two antennae, as well as with automatic charging of the cord.

To the coil with one antennae

It is very easy to wind a fishing line onto a reel with one antennae. In such designs, depending on the brand of trimmer, two to five meters of cord is placed. The edge of the fishing line in the spool must be tucked into a special hole or groove, after which the string is wound in the direction opposite to the rotation of the coil during operation.

Advice! To understand in which direction to wind the thread, you should look at the bobbin case. Usually marks are made on it that indicate the direction of movement of the bobbin during operation.

After the fishing line is wound, you need to leave a small piece (15-30 cm), thread into the exit hole of the spool and reassemble the head.

To the coil with two antennae

In spools of this type, you need to inspect the inside of the coil and determine the number of grooves for winding the cord provided in it.

Important! If there is one chute in the coil, then both antennae must be wound along a common groove, if two, then on separate tracks.

For winding, you need to take a piece of fishing line with a length of two to three meters. For single groove spools it is necessary to fill the fishing line into the through hole, align the mustache, align and wind it on the reel in the direction opposite to its rotation during operation. If locking grooves are provided, they need to thread the ends of the cord, then pull them into the outlet, then close the coil and put it back on its place.

For two-groove spools the difference is that the length of the string should be folded in half. Next, you need to charge the middle of the bend into the groove between the grooves, then wrap each of the pieces of fishing line along its path, fix the antennae and assemble the reel as well as the bobbin with one track.

On trimmer head with automatic refueling

For heads with automatic refueling, just enough start and pinch the edges of the line, and the tool will carry out further winding on its own when turned on. It is impossible to make a mistake here, because the coil itself recognizes how the antennae should be located.

On a note! The advantages of trimmers with such a head include the convenience of laying the cord, and the disadvantages are the high cost and complicated repair.

Fishing line. Varieties and the possibility of replacing with other material

The cord for the trimmer can be of different diameters (from 1.2 to 4 mm), and you need to choose it depending on what kind of vegetation you want to mow. The thicker the fishing line, the more rough grass it can handle. Experienced users recommend putting a fishing line with a thickness of 2 mm, which is universal.

Fishing line shape can be round (for juicy grass) or with sharp edges in the form of a square or asterisk (for mowing dry grass). The second type is less durable and wears out faster in comparison with a round cord.

One of the popular questions regarding the operation of trimmers is whether it is possible to replace the special cord for mowers with other materials, for example, metal or steel cables and strings, wire, etc. You need to know that the installation of such items not recommended, because with them the trimmer turns into a dangerous technique. During the mowing, pieces of wire or metal will constantly break off and fly apart in different directions, risking injury to the worker. And if you accidentally touch their limbs during work, a serious injury is guaranteed.

For trimmers who are interested in using fishing line, we answer. This is allowed, but it will tear and wear much faster, which means that it will require frequent replacement.

Advice! Fishing line is well suited for harvesting grass near a fence or wire mesh. Instead of spending an expensive trimmer cord, you can charge large-caliber gear (2-3 mm), which is much cheaper.

Replacing fishing line on the disc

Depending on the type of vegetation covering the garden (lawn) and requiring removal, the fishing line changes to disk. This is necessary, since the cord is used only for grass of small height, and if you need to mow tall growth, tree shoots or shrubs, instead of a string, it is better to use metal or plastic knife-disks. Installing them correctly is very simple, the detailed process is usually described in the user manual and is similar for trimmers of different brands, be it Al-Co, Oleo-Mac, Patriot or another brand of equipment. To change fishing line to knives, you must:

You can read in detail how to change the reel with fishing line on the disc, in the instruction manual of the device.

Most of the problems associated with fishing line, similar for different trimmers and are solved in a similar way.

Regular line breaks are caused by:

Typically, the line ends very quickly if you constantly tap the semi-automatic reel on the ground or press it firmly to the surface. In this case, the head is unlocked, the cord lengthens, and the knife cuts it. The second option is the fast consumption of fishing line. A trimmer with an automatic reel is not used correctly. If the mower regularly reduces the engine speed, the string is constantly lengthened and cut, and as a result is quickly consumed.

The string does not hold

If the coil is semi-automatic type the spring is weakening, the fishing line does not hold and unwinds during operation. The cord extends, is trimmed with a knife, as a result, the owner of the equipment notices that the thread ends quickly.

Advice! To test the tool, you need to remove the protective cover and start the engine. If the fishing line extends, this means that the spring must be replaced with a new one.

If the string flies when mowing, this is another evidence that the spring in the bobbin is weakened or completely lost when the head was not carefully dismantled. As a result, the cord does not hold and jumps out during rotation.

The string does not extend

In automatic reels and semiautomatic machines, the cord is fed without stopping the trimmer. If this does not happen, then:

The coil does not spin

The reasons why the reel does not spin are similar to the lack of line feed. This is an incorrect or uneven winding of the string, its sticking, as well as the short ends of the cord coming out of the holes.

If the fishing line sticks together during operation, the main reason is the installation of a low-quality cord. During operation, the coil heats up, and a poor-quality string melts and sticks together. The second reason is the collision of the cord with solid objects. In this case, its sharp braking occurs, the thread is pulled into the head and sticks.

Advice! To avoid problems, you can apply mineral oil to the surface of the fishing line or, after winding it on the head, spray it with silicone. A more competent solution will be the acquisition of a good quality head, which will forget about such problems.

So, replacing the fishing line on the trimmer is not difficult if you know how to disassemble the coil and wind the cord. This process is similar for technology of different brands. A detailed description can be found in the instruction manual of the tool or see the.