After a preliminary check has established the presence of faults in the drive, it is necessary to open the screwdriver and remove the battery, i.E. Battery cells connected in series with each other. The battery includes from 10 to 12 cells (cans), each has an operating voltage of 1.2 V. Usually, a battery of 10 such cans is installed in screwdrivers.

Checking the elements begins with a visual inspection of the attachment points. Failure in fastening (soldering, welding) can cause underestimated parameters. Then the voltage on each bank is measured. The voltage should not be less than 1.2 V. It should be borne in mind that thermal sensors are placed in modern screwdriver designs to monitor battery charging. During measurements, they should be disconnected, and the device should be connected to the main terminals (poles of the jar). Identified cans with an underestimated operating voltage are disconnected from the battery and must be replaced. If a simple voltage measurement did not reveal the presence of inoperative elements, then measurements should be made under load using a method similar to the preliminary check of the drive.

The most common type of drive used in screwdrivers is the nickel-cadmium battery. The main advantages of such elements are recognized as high capacity with small dimensions and weight, as well as a fairly long service life (up to 3500 cycles). The electromotive force of the element reaches 1.37 V, and the specific electric energy. Up to 65 Wh / kg. Limits the use of such elements (especially in imported tools) harmful production.

Nickel-metal hydride batteries for the screwdriver are becoming the main competitor to nickel-cadmium copies. The main advantage of such elements is safety and environmental friendliness. It is recommended to store the cells in a charged state, since if they are not used for a month, they may be discharged to such a state that they cannot be charged.

In the latest models of screwdrivers, modern promising types of batteries are used: lithium-ion and lithium-polymer. They have a very high capacity and small dimensions, but their cost is still quite high.

Diagram of a battery tester.

When testing batteries for a screwdriver, remember about the influence of the “memory effect”. This phenomenon is based on the fact that frequent charging of an incompletely discharged battery can change the cell’s capacity due to residual charges from the previous charging. Nickel-cadmium specimens are especially susceptible to the “memory effect”. This property causes a full “training cycle” to be performed before testing. It consists in completely discharging the battery and then fully charging it.

The most important parameter of a screwdriver battery is its capacity. To determine it, there is a special device. A pendant-type battery tester, but it is mainly used by professionals, and for most users it is not available. Therefore, this parameter is usually analyzed by evaluating other parameters. The current and voltage at the output of the battery are directly measured.

Checking the battery capacity of the screwdriver

The battery capacity of the screwdriver is determined by measuring the operating time of a fully charged power supply on the tool. If the value obtained is less than that indicated on the power supply case, then one or more of its internal elements have become unusable.

How to measure voltage

The measurement of the value of this characteristic on a rechargeable power supply using a multimeter is as follows:

On a note. If the “-” sign appears on the display next to the numbers, then this means that a “polarity reversal” occurred when connecting the terminals or tips of the probes: the probes are attached not to the poles of the same name, but to the opposite poles (the negative black probe is attached to the positive pole, the red positive one. To This situation is not particularly dangerous, but for normal operation of the meter it is better to avoid it and observe the polarity of the probe connection.

How to check battery capacity with a multimeter

The capacity check (one of the main characteristics of batteries) is carried out using various meters, the simplest and most common of which is a multimeter. How to determine the battery capacity using a multimeter (multifunctional meter), computer programs and mobile applications will be discussed in this article.

How to measure voltage

If it is necessary to check only the battery voltage, then the multimeter is switched to DC mode. If you need to check a power source whose voltage does not exceed 20 volts, then in this sector the mode switch is set to 20 V.

Then the black probe of the multimeter should be connected to the negative terminal, and the red one to the positive of the battery, the display of the device, at this moment, will show the DC voltage.

Usually, a serviceable and fully charged car battery has a voltage of 12.7 V. If the density of the electrolyte is normal at this voltage, then the power source can be used for its intended purpose.

Similarly, the voltage of lithium-ion batteries of cell phones, as well as alkaline or gel batteries, which are used to start engines of various motor vehicles, diesel generators and other devices, for which a certain charge of electricity is required, is measured.

How to check the leakage current

The battery can self-discharge, even if its terminals are not connected to electricity consumers. The self-discharge rate is indicated in the documentation for the battery and is a natural process. The loss of electricity can be especially noticeable in acid batteries. 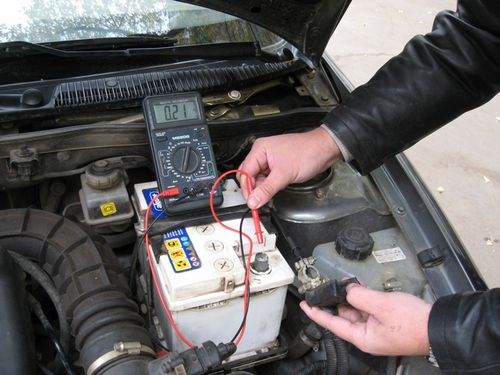 In addition to natural electric current leaks, there may be areas in the circuit that are wet or with thinned insulation. In this case, even at the moment when all electrical consumers are in the off state, an additional leakage of current occurs, which can lead to a complete discharge of the battery, and in some cases, to a fire in the damaged area.

Especially, such a phenomenon can be dangerous in the on-board network of a car, in which the entire body and units are a negative conductor, on which there may be a sufficient amount of flammable substances to form an open flame even from a small spark or electric arc.

To identify such “unauthorized” consumption of electricity, it is necessary to turn off the ignition of the car, as well as turn off the devices operating in the “standby mode”, such as a radio tape recorder and alarm.

The red probe of the multimeter is connected to the “” battery, and the black one, with the disconnected terminal. At this point, there should be no readings at all. If the multimeter shows any value, then the leakage current is significant, and it is necessary to make a detailed diagnosis of the vehicle’s on-board network.

Similarly, leakage measurements are made in other electronic systems. When carrying out diagnostics, care should be taken, and if you suspect a significant electrical leakage, which is manifested by arcing when disconnecting or connecting a terminal, you should refuse to measure the leakage current with a multimeter.

If you neglect this rule, then you can “burn” the device, which is not designed to test large values ​​of current strength.