How to Clamp a Drill In a Hammer

During construction work, the use of a rotary hammer becomes more and more popular. With its help, various holes are made or the old cement-stone coatings are dismantled. Often there is a situation where drilling accessories cannot be removed from the drill chuck. How to pull out the drill yourself and with the least risk of tool damage? For this, it is necessary to understand some features of the occurrence of similar problems during the operation of the tool. 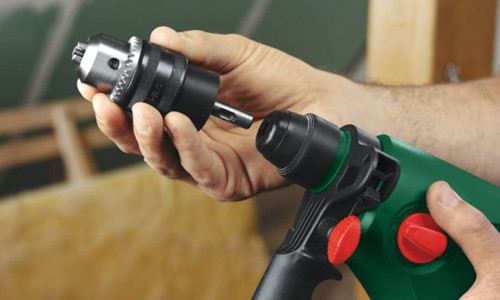 If the drill stuck in the chuck, you need to drop a few drops of oil at the junction.

Varieties and causes of jamming drill in a perforator

There are 2 options for such a problem:

The first option arises from the need to use a conventional drill when working with a hammer drill. For this, there is a transitional chuck, as in a conventional drill, it is inserted into the clamping device of the punch, the drilling process is carried out. After completion of work, sometimes it is not possible to freely pull out the drill, because it is impossible to unscrew or unclench the jaw of the chuck. This problem is not difficult to resolve. As a rule, the drill sticks due to the fact that the clamping device has not been lubricated or is very dirty.

Diagram of a drill chuck.

To release the clamping mechanism, it is necessary to drip into it with a special penetrating liquid, for example, WD-40, kerosene can also be used. After 5-10 minutes, you need to gently tap the chuck with a copper hammer, while at the same time try to loosen the drill with your other hand. After these manipulations, the mechanism lends itself to loosening. When the cartridge is free, it must be cleaned and greased.

In the second embodiment, the drill stuck in a perforating cartridge. This happens for other reasons than when jamming the drill in the chuck. A drill or drill in a drill experiences rotational and sometimes weak shock loads, which are transmitted to their body only through clamping jaws and a constant emphasis in the bottom of the cartridge. The hammer has a completely different mechanism for transmitting forces and other kinematics of the drill in its chuck. Since the rotary hammer provides a rotational-shock or shock vector of force transmission, the drills and drills receive energy with a special hammer, which is driven by the electric motor of the tool and hits the shank of the inserted devices (drills, drills, crowns, chisels). The inserted snap-in has special grooves in its body, with the help of which they are fixed in the calculated limits and the transmission of torque. Poor-quality tools have too mild steel, which has not passed heat treatment, as a result, the shank is riveted in the puncher, especially during prolonged use.

Ways That Can Help Pull A Drill Out

You can get a stuck drill with a vise if you hold a drill in them and pull out the drill by loosening.

The device of the perforator cartridge involves the movement of drilling (drilling) equipment along the barrel. When riveting occurs (increasing the diameter of the opposite side of the drill), the barrel does not allow the drill to freely exit. This is the most common cause of the problem. You can try to remove the snap in the following ways:

In both methods, penetrating liquids can be used. In rare cases, the cause of jamming is operation without lubrication and trapped clogging. The fixation ball, if it gets scale or solid stones, may not release the drill. To prevent this from happening, in the future it is necessary to lubricate the drill shank.

If the drill got stuck as a result of turning in the chuck itself, then it is necessary to dismantle the chuck parts by removing the rubber cap and circlip. Or try to turn the drill back 90 ° (the direction of the turn is visible in the recesses on the drill and the cheeks of the chuck). Turning the drill, as a rule, leads to the subsequent replacement of parts of the clamping device.

It should be noted that during long-term work with low-quality equipment, a strong deformation of the shank occurs, therefore, the proposed methods cannot release the drill.

The scheme of the device punch.

In this case, a complete disassembly of the punch will be required, after which a stuck drill is knocked out with a punch. As a result of such an operation, the tool barrel will need to be replaced. The disassembly scheme for many devices is individual, so it is advisable to find an assembly drawing of all nodes. However, without locksmith skills, one should not disassemble and repair the stem assembly. In this case, it is better to contact the workshop.

See also  Hammer Drills But Does Not Hammer

It is possible to pull out the drill with the proposed methods after the first 2-3 strokes of adequate strength. If no noticeable progress has occurred, subsequent attempts to knock out the drill may damage the perforator itself.

Recommendations for preventing such cases

If after making several holes the drill calmly passes through the shank, then the equipment is of high quality. If riveting occurs, then with a high probability it will be possible to pull out the drill without disassembling the punch, as the deformation will be slight. It is important not to miss the moment of occurrence of difficulty in moving along the trunk.

Sometimes too powerful a tool is making holes in materials not intended for these drills. Drills, even if they are of high quality, can not withstand heavy loads and deform.

If you could not pull the drill out of the punch yourself, then you need to be prepared for the fact that contacting the service with such a problem will void the warranty on the tool, since the use of low-quality equipment is the fault of the buyer and user.