How to Convert a Screwdriver to a Socket

A screwdriver is one of the most commonly used types of tools in everyday life and production. This device is in demand for electrical and construction works, as well as for the assembly of furniture and other items, the design of which provides for threaded connections. Cordless screwdriver has such advantages as compactness and mobility. Nevertheless, many owners of this tool are often interested in how to remake a cordless screwdriver into a network one. 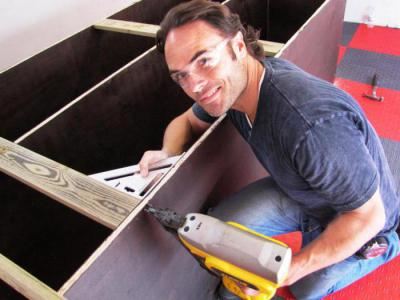 What is the reason for this? When using it, one has to face such a disadvantage as low energy consumption, which forces the battery to be charged after every 40 minutes of intensive use. On the other hand, with rare use of the device, spontaneous discharge of the battery leads to its breakdown due to the destruction of the constituent elements. It is impossible to repair a battery that has become unusable, it may be difficult to purchase a new one: often only official representatives of a manufacturing company sell components and the cost of a new battery is slightly lower than the price of a new screwdriver.

What are the benefits of changing the type of food

A household screwdriver with a failed battery can be switched to mains power by making some changes to its design. This does not require a significant expenditure of money, time and effort. At the same time, the advantages of such a tool transformation are obvious:

The only drawback when working with a power screwdriver is the dependence on the availability of the mains.

Before starting work, all necessary materials should be prepared. All of them are inexpensive and are on sale. Some structural elements, such as a battery or power supply, can be taken from old, no longer used devices.

Before converting a cordless screwdriver into a network one, make sure that:

The power supply provides AC conversion, the voltage of which is 220 volts. Screwdrivers consume direct current with a nominal value of 9–19 V, therefore, connection to the network is carried out using an electronic transformer, for this purpose it is better to use products of the Toshibra and Feron brands.

Transformers of these brands are reliable in operation, compact enough, lightweight, do not complicate the movement of the tool. Their load characteristics correspond to the parameters that a screwdriver for a house has. Decreasing during overloads, they protect the tool from damage. The design of the devices has 2 input and output wires, they allow you to provide power to halogen lamps and other types of electricity consumers with a voltage of 12 V.

Increased dissipation inductance provides a falling characteristic, additional galvanic isolation increases the safety of the power supply. By changing the number of turns of the primary winding, you can adjust the output voltage by adjusting it to a specific type of screwdriver.

Due to the removal of the secondary winding from the midpoint, it is possible to use not a diode bridge, but a half-wave rectifier equipped with only 2 diodes instead of 4. This will reduce power losses by 2 times.

Capacitors C1 and C2 smooth out low-frequency and high-frequency pulsations; the HL1 LED can be used to check the operation of the unit. Resistor R1 limits the amount of charging current supplied by the capacitor; load resistors R2 – R7 enable the power supply to start.

Connect the cable to the terminals of the charger and battery

Converting a cordless screwdriver to a network one requires creating a solid connection of the wire with the charging and battery contacts. When performing the operation on the charger, the cable with the terminals is usually connected by soldering, but it can be replaced using crocodile clips. Before starting work, the surface of the soldered parts is treated with acid. You can also use special solder.

When connecting the cable to the battery terminals, it is not recommended to use the clamps. During operation, such a bond will be disconnected. The only reliable way out is to solder the ends of the copper core to the contacts. It is most convenient to use the battery of the screwdriver itself. Previously, it is disassembled to remove spent batteries. At the same time, it is advisable to protect the skin of the hands and respiratory tract from the ingress of harmful substances contained in the old battery filling.

Entering and securing the cable in the battery case

Then you need to clean the tool. A screwdriver at the location of the spent elements is treated with a rag moistened with a weak alkaline solution, then with ordinary water. To drain the case, wipe it with a clean rag. After complete evaporation of moisture, the ends of the cable are soldered to the contacts located on the inner wall, observing the polarity.

READ  How To Remake A 12 Volt Screwdriver Battery

If it is violated, there will be a change in the direction of rotation of the screwdriver, and hence the position of the button that switches the reverse. A hole is drilled in it to insert the wire into the battery case. On the inner side of the wall of the device, the cable is fixed using electrical tape and insulation removed from a larger diameter wire.

To prevent tension and breakage of the wiring, an insulating sheath is put on it and fixed to the surface with several layers of insulating tape. To eliminate the shift of the center of gravity, it is necessary to compensate for the change in the mass of the handle of the device by adding a counterweight. As it is possible to use a piece of pressed rubber.

What to do when there is no charger

It is also possible that the charger is lost or broken. How to remake a cordless screwdriver in the network with your own hands in this case? Use a battery designed for use with another technical device.

The main condition in this case: a household screwdriver must have characteristics corresponding to its parameters. Not only voltage, but also current strength. For example, when using a car battery, increased values ​​of this indicator contribute to overheating and rapid breakdown of the electric motor.

Thinking of how to remake a cordless screwdriver into a network one, you can use a car battery. But this option is only suitable for those cases when it is necessary to produce a small amount of work. The connection is carried out similarly to the connection to the terminals of the charger described above.

The combination of a car battery with a portable power supply

This is one of the possible solutions to the problem. Consider how to remake a cordless screwdriver into a network one using a power supply. A soft cable is attached to the terminals of the tool, to the second end of which an electric plug is attached. In order to make a power supply, it is enough to connect a rectifier to any transformer with the relevant data for a screwdriver. Its task is to convert an alternating current with a voltage of 220 volts. Screwdrivers of different brands require a constant current supply of a certain value, which can be adjusted by increasing or decreasing the number of turns on the transformer coil.

With a lack of experience in this area, it is better to use a ready-made transformer with the necessary characteristics and equip it with a rectifier. The rectifier bridge diodes should match your current screwdriver model. Its connection is made according to the standard scheme.

How to avoid unnecessary operations using a computer power supply

The method described above has a significant drawback. Its implementation is associated with certain difficulties. But there is an easier way out. To do this, you will need a power supply from any computer. We will figure out how to remake a cordless screwdriver into a network one with its help.

The main advantage of a computer power supply is its versatility. With the correct connection of the wires, you can get currents of any value. It does not matter what parameters your tool has. Using a screwdriver when using such a transformer will be as convenient as possible.

The presence in the power supply of the cooling system guarantees the duration of its operation. It is important to place it in an insulating casing, provide grounding of the device and install an electrical outlet on the wall of the rectifier. Emergency shutdown of the power supply is carried out by a toggle switch located on the rear panel of the housing.

If the house has an old inverter machine, you can use it to convert a screwdriver. But it must be borne in mind that the currents generated by welding do not meet the required ones, and this forces changes in its design. A secondary coil must be connected to the components included in the device. This work requires analysis and calculations, which without the knowledge of radio engineering cannot be carried out independently.

Rules for using a modernized screwdriver

We examined various options for answering the question of how to remake a cordless screwdriver into a network one. Useful tips that may come in handy when working with an advanced tool:

Adhering to the above rules, you can increase the service life of the screwdriver, the design of which has been amended. It will become less mobile, but this is offset by the lack of the need for regular recharging of the tool. An additional advantage of the alteration is that you do not need to purchase new batteries to replace failed ones.