How to Cut a Chipboard with an Electric Jigsaw 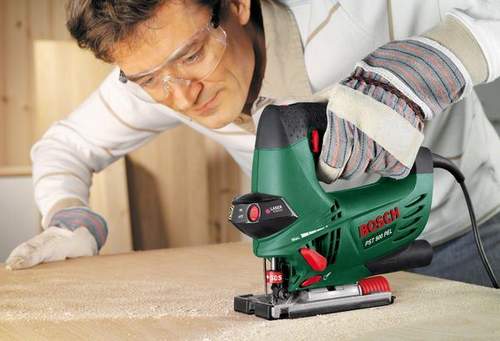 The jigsaw is, in fact, a saw with an electric drive, cutting sheet material using reciprocating movements of the working blade. The tool allows you to cut almost any material, namely metal, wood, plastic, ceramics, and even stone. The cutting blade is capable of making mortise, straight, curved cuts, as well as cutting circles. In the article we will analyze how to saw with a jigsaw correctly, to ensure that the cut corresponds to the specified markup.

Jigsaw can have a normal and pendulum stroke. In the normal course, the web moves vertically, cutting the material as it moves up. A tool having a pendulum stroke, additionally, when moving upward, feeds the blade forward. At the same time, a higher speed of operation is achieved, and the wear of the blade is also reduced due to the deviation of the file in the opposite direction when moving down. A reasonable question arises about how to saw with a jigsaw with a pendulum stroke? The work is done in exactly the same way, but it is taken into account that with the maximum deviation of the file it is best to saw soft wood and plastic. When cutting chipboard, MDF, soft metal, thick wood, it is necessary to reduce the amplitude of movement of the blade. This mode is not recommended to be used at all when working with steel sheets.

How to saw with a jigsaw in a curve

To cut a round hole, you need to drill an initial hole in the workpiece, into which the file is then inserted. After that, a cut is made at the mark. If you have to cut a rectangular or square hole, then the cutting is performed in a straight line to each of the edges, after which the blade is slightly retracted, and carried out along a curved line to the next side. So all four sides are cut out. After removing the sawn area, the remaining triangular parts are sawn out.

An electric jigsaw is able to cut bevels, as a result of which the edge of the resulting product will have an even cut in some direction. For such a cut, it is necessary to change the installation angle of the jigsaw ski, and then make a cut.

How to saw in a straight line with a jigsaw

If a thin wooden sheet is cut, it is likely that chips will appear on the front of the product, since the file cuts the material when moving up. To prevent this phenomenon, it is recommended to place the workpiece face down or use anti-splinter liners.