How to Cut a Profile Pipe Under 45 Degrees

In household households, profile pipes are widely used in the manufacture of greenhouses, greenhouses, awnings to protect automotive vehicles from atmospheric precipitation and other structures. When working with this material, it is useful to know how to cut a profile pipe along the line or across with the most accurate angle.

Among the large number of building cutting tools for metal, the leader in speed, ease of cutting and cost-effectiveness is the angle grinder (angle grinder), which is often present in the tool kit of any home master. To cut a profile steel pipe using an angle grinder, you will need a regular metal disk and strict adherence to safety rules. Breaking a disk into segments at high rotational speeds can lead to serious injuries. 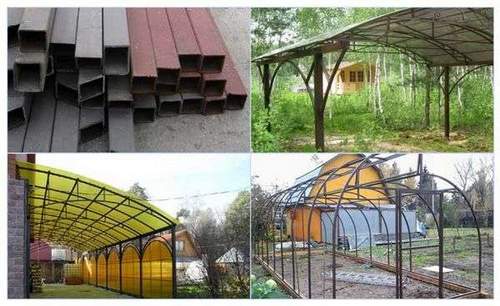 Fig. 1 Profile pipes in the household

How to cut a profile pipe evenly across

Most often, a rectangular or square pipe metal profile with a wall thickness of not more than 3 mm is used in households, and cutting into individual segments is necessary when assembling welded frames.

To correctly cut the pipe, additional devices are used to mark and mark the cutting line, some of the devices serve as the reference face for the cutting disc.

The nuances of working with a rectangular section

Rectangular blanks are much easier to cut along and across at any angle than cylindrical elements, which are difficult to keep stationary on a flat surface. Cross cutting workpieces from any angle is not particularly difficult. The line of the desired angular slope is carried out on the side face and always coincides with the calculated one (round elements require the use of special patterns calculated on a computer to combine their faces at an angle other than a straight line).

The wall thickness of the metal profile when used in households rarely exceeds 5 mm. It is easy to cut it using an angle grinder with any metal disc.

What tool is used

As noted above, the main tool for cutting metal parts in everyday life is an angle grinder, in its absence, you can use a hacksaw for metal or a jigsaw, which can also cut metal materials with a special diamond-coated blade.

For cutting the angle grinder using cutting electrocorundum disks, not intended for grinding operations. As an auxiliary tool, tape measure, a metal ruler, various types of clamps, pencils and markers for marking are useful.

The use of a paper sheet is a simple method of marking a rectangular or square profile for precise cutting at an angle of 90 or 45 degrees in the direction of its axis.

To make a marking for transverse cutting at an angle of 90 degrees, take a sheet of paper and wrap a pipe in them until the edges are precisely aligned, and then they are glued together. With this method, the cut line is very visible, in contrast to applying it with a pencil or marker on the edge of the template.

After that, they cut the profile along the patterned edge, alternately from all sides, trying not to allow the complete cutting of the finishing sections. This can lead to impact of the disk against sharp corners and its destruction.

It is very convenient to cut a profile pipe using a special template, which is an analog of a construction miter box for cutting building materials at different angles.

To this end, the metal template is made from the profile pipe cut along a piece of the pipe above or in another way, it can be designed to obtain a straight line or an angle of 45 degrees.

How to Cut a Profile Pipe Under 45 Degrees

To cut the metal profile, a template is applied to it and a scribble line is drawn with a scribe, along which a cutting is then done. In other cases, the template is held and an angle grinder is drawn to the line along the surface of the workpiece, trying to avoid strong pressure of the side surface of the disk to the attached metal template. Then the template is removed and the cutting is continued along a well-marked recess on the edges of the workpiece.

Using the template, you can get a very even cut line, if you do not hold it by hand, but fix it on the workpiece using clamps or fixing bolts. For self-production of fasteners, a hole is drilled in the side surface of the U-shaped plate of the template and a union nut is welded at this point from the outside, into which the bolt is screwed. To fix the template, attach it to the part to be cut and screw the bolt, pressing the template surface to the workpiece, then an angle grinder with a metal disc is cut, slightly touching the guide edge.

Fig. 4 How to cut a workpiece with a homemade machine

A good option for making a template is to use for marking a short section of a pipe of a larger diameter, the guide edge of which is previously cut at the right angles. When marking the part, put it on the pipe to be cut, and then mark its surface with a marker or scriber. The second method is the rigid fixation of the template on the workpiece using wedges or clamps with a further sharp metal disk with a slight pressure to the side surface of the template part.

In order not to cut metal pipes or a sheet of iron by eye, some home craftsmen use home-made fasteners to an angle grinder, rigidly fixing it to a vertically mounted spindle. When moving the tool from top to bottom, there is a stable even cut of the part located under the disk, if metal guides are fixed on the machine bed, then when applying a workpiece to them, you can get any desired cut angle.

A large-diameter metal profile has thick walls and a lot of weight, if thin disks with a size of about 1 mm could be used for cutting thin-walled parts (wall thickness up to 2 mm.), Then 2 mm are taken for cutting thick-walled metal. Disk circles. Accordingly, it is more convenient to cut thick walls with a large-diameter disc using a powerful large-sized construction angle grinder. Household appliances do not have enough power for quick work, and their small disks quickly grind off.

When performing work, they are guided by the following rules:

How to cut a profile pipe along. Cutting technology

If the cross cutting of the profile does not cause any particular difficulties, then the longitudinal section, which is necessary for some work in the household, is more complicated due to its length.

One of the problems during its implementation is the accuracy of the marking, for its application in the center or at another point of the cut face, mark the entire length at the same distance from the side wall and then connect them with a pencil, marker or scriber, using a straight corner as construction As a rule, level, profile from drywall.

Fig. 6 Cutting the pipe along the guide angle

In order to saw the metal profile in the longitudinal direction, an angle grinder is driven along the line, gradually cutting through the through hole. The method is not too accurate, you have to hold the tool without any support.

A more convenient way to qualitatively longitudinally cut the workpiece is to use auxiliary supports in the form of a metal corner or even straight plates. To do this, the corner is mounted on the surface of the workpiece using clamps and the angle grinder is driven along its lateral face, if the length of the template corner is small, it is unscrewed and moved further to a new place, after which the cutting is resumed.

The second way to obtain an even longitudinal cut line is a rigidly fixed angle grinder on the machine or table in the lateral position. In this case, the cut workpiece is moved along the guides, leading to a rotating disk of an angle grinder (the principle of operation resembles an electric tile cutter), the straightness of the resulting line is determined by the stiffness and length of the supporting elements.

To obtain the specified sizes and configurations of profile pipes in the household, circumcision is used with an angle grinder and inexpensive detachable corundum disks. To get an even and accurate cut line, it is better to use support guides or home-made steel templates that specify the desired angle.