How To Cut Corners Of Skirting Boards

How to cut ceiling plinth in corners
The final stage in the design of the premises. Installation of a ceiling plinth. How to make a corner correctly so that everything will come together without gaps, how to join in the outer and inner corners. Read on.

How to cut ceiling plinth in corners

The quality of the ceiling finish greatly affects the appearance of the room. Therefore, they try to do everything perfectly, or very close to it. The finishing touch to the design is the ceiling plinth. They give the finish a complete and holistic look. The strips themselves are mounted on flat surfaces simply: on special white glue, but problems arise with the design of the corners. Without knowing how to make the corner of the skirting board correctly, a lot of material deteriorates. We will tell you about how and what to cut it in the corners.

There is one more, simpler way. For skirting boards made of polyurethane or polystyrene, use ready-made, factory decorative corners. They are installed in a corner, strips are glued to them closely. It is very easy to cut them if necessary: ​​by a few millimeters with an ordinary clerical knife. 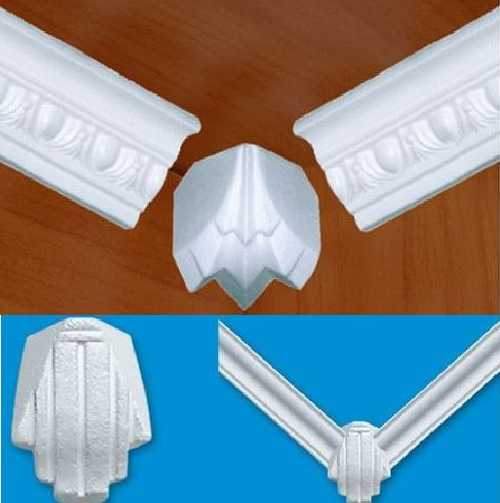 What is it made of and what is it called

The very first skirting boards on the ceiling were made of plaster. They were cast in special molds and then installed on the ceiling with mortar. Such figured decorations were called fillets. Today you can rarely see them: they are expensive, and outwardly they are almost indistinguishable from the cheaper options. And the name is almost lost.

The most popular ceiling skirting boards are made of polyurethane or polystyrene. They are inexpensive, look great, easy to install, have a wide range of profiles and patterns. The width can be from 5 mm to 250 mm. They are used in almost any room, decorated in any style. The exception is wooden houses with a corresponding interior. Wooden products are most often used here. The style dictates its own conditions.

There is also a similar plastic finish. It is mainly installed in bathrooms. But even in damp rooms, you can safely mount polyurethane strips. They are not afraid of dampness.

You need to cut the ceiling plinth in the corners of any material in one of the ways described below. The only exception is plastic skirting boards: you can arrange such a corner only using ready-made corners.

READ  Which screwdriver is better to choose for home use

This method can be used if your corners are even and you want to trim the baguette exactly 45 degrees. To do this, before cutting the ceiling plinth in the corners, you need to draw a miter box on thick paper. Draw two parallel mowing lines and mark the angles at the desired degrees using a protractor.

We place the fillet in this case in the same way as on a traditional miter box. Please note that you need to cut the skirting board holding the tool in a strictly vertical position.

Features of cutting ceiling plinths in a miter box

It is necessary to work with this device with extreme care so as not to blunt the tool and not leave cuts in unnecessary places. In the process, we adhere to the following instructions:

We insert a cutting tool (hacksaw or knife) into the desired gap and cut the fillet.

Method for cutting a ceiling plinth without a miter box

To neatly dock fillets in the inner corners, you can do without a miter box.

We carry out the work in the following order:

We apply the end part of the baguette to the sheet of paper and outline the outline of the convex side. It is more convenient to use a small piece of plinth (if any).

We transfer the contour to the surface of the baguette with a simple pencil.

Cut along the drawn curve.

For fitting, we apply one plinth tightly with the end part to the wall, and then the second.

How to trim a ceiling plinth using a miter box template

Something resembling a miter box can be done by applying the required cut angles to paper, cardboard or wood. Draw two parallel mowing lines, locate the center, and then set the required angles using a protractor. The advantage of this method is that you can postpone any angle, including more than 90 degrees. Of course, before cutting the corners of the ceiling plinth, you must first check the angle between the walls with a corner and measure it with a protractor.

READ  How To Cut Ceiling Plinths In Corners

The technique for cutting a ceiling plinth using a painted miter box is exactly the same as using the miter box itself. We press the plinth plank to one of the parallel lines, then set the hacksaw at the desired angle, which is already outlined, and cut it off.

Marking the skirting board on the ceiling also allows you to cut the corner straight and precisely. The only drawback of this method is that it is difficult and inconvenient to keep the plinth strip suspended during the cutting process. Otherwise, you can mark the cutting angle in this way even more accurately than in other ways. Applying the plinth to the installation site, all wall flaws and deviations in the angle size are immediately taken into account.

Cutting the corner of the skirting board:

We cut off the skirting boards along the outlined lines, join them and apply them to the installation site. Note that this method makes it easier to cut inside corners.