How to Cut Fillets In The Corners Without A Bite

One of the most difficult stages in the installation of ceiling skirting boards is their proper cutting. Only competently joining separate elements on external and internal corners, you get the desired result. The fillets will look aesthetically and neatly if they are cut off at the right angle and close the cracks. To perform this task, a special tool (miter box) is used. And if it is not, then other devices will help. 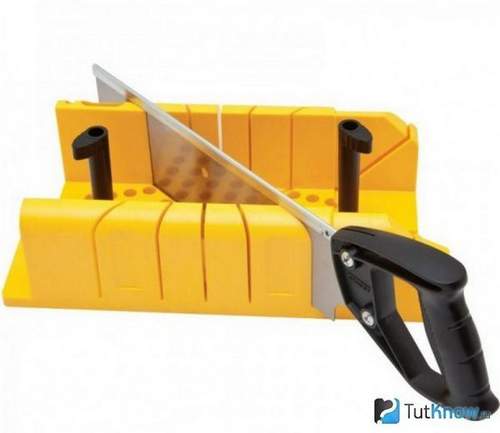 To correctly and accurately cut off the ceiling, you need to use a tool suitable for cutting. It is chosen depending on the material from which the fillets are made:

Styrofoam. It is characterized by low strength and is relatively inexpensive, and therefore foam models are becoming increasingly popular. Their strength does not particularly affect performance, since the ceiling skirting is usually not subject to mechanical stress. An ordinary stationery knife is suitable for cutting.

Extruded Styrofoam. Cheap material in which the density is several times higher than that of foam. Because of this, cutting it is a little more difficult, and therefore a sharp and thin knife is used for this purpose.

In addition to the tool for directly cutting the baguette, you will need a miter box. This is a special device made of wood, plastic or metal in the form of a box with cuts on the sides. A hacksaw or knife can be inserted into it at the desired angle. Thus, the cutting angle is as accurate as possible.

We knock together three planks of 5015 cm with a long edge in the shape of a triangular, rectangular box. Please note that an angle of 90 degrees must be observed between the side bars and the transverse plank.

READ  How to Make Trimming From a Circular

Using a protractor, we mark an angle of 45 degrees on the bars. Instead of a protractor, you can use a school square. In it, one angle is 90 degrees, and the other two are 45 degrees.

For efficient and high-quality work, you need to choose a tool in accordance with the baseboard material and choose a cutting method. If you have a miter box, then there will not be any special difficulties in the process. If it is not, then two options are possible: cut according to the template and measurements on the ceiling or make this tool yourself.

Features of cutting ceiling skirting boards in the miter box

It is necessary to work with this device with extreme caution so as not to blunt the tool and leave gaps in unnecessary places. In the process, we adhere to the following instructions:

Insert the cutting tool (hacksaw or knife) into the required gap and cut the fillet.

The technique of cutting ceiling skirting boards according to the pattern

This method can be used if your angles are even and you want to cut the baguette exactly 45 degrees. To do this, before you cut the ceiling plinth in the corners, you need to draw a miter box on thick paper. We draw two parallel lines and mark the angles at the desired degrees using a protractor.

We place the fillet in this case in the same way as on a traditional miter box. Note that you need to cut the skirting, holding the tool in a strictly vertical position.

This method is used for cutting plinths in those cases when there is no miter box or parts from which it can be made.

READ  How to Cut Ceiling Skirtings Without A Miter Box

To do this, make markings on the wall in this order:

We apply a baguette in a corner to the place of fixture.

On its one edge we spend on the ceiling a base line for the level of fastening.

We apply the fillet in the same way to the perpendicular line drawn on the ceiling and again draw a straight line on one side. We should get two segments that intersect at one point.

We again apply two skirtings in turn and mark this point on them.

We repeat the same procedure now on the wall to indicate on the products the place of cutting from below.

Connect the two points with a line. It can pass at an angle of 38-45 degrees, since the walls and corners in living rooms are often uneven.

To neatly dock in the inner corners of the fillet, you can do without a miter box.

We carry out the work in this order:

We attach the baguette with the end part to the sheet of paper and draw a contour of the convex side. It is more convenient to use a small segment of the plinth (if any).

Transfer the contour to the surface of the baguette with a simple pencil.

Cut out the curve.

For fitting, one skirting board is applied tightly with the end part to the wall, and then the second.

When working with a miter box, two points must be taken into account:

In addition, you need to know such nuances before cutting the baseboard:

Before you start cutting the baguette using the miter box, try cutting off the trial bar to prevent mistakes.

READ  How To Cut Corners Correctly

If the baguette is installed under a stretch ceiling, then attach it only to the wall. The adhesive must in no case get on the vinyl canvas.

The final fixing of the skirting board should be done only after the exact adjustment of the plank.

If the corners and walls in the room are even, then fitting can be done on the floor.

When installing baguettes, it may be necessary to customize them several times, so stock up on the tool and patience.

Instead of a template and a miter box, you can cut in the corner between the wall and the floor, or by moving a table to the wall. In this case, on the wall, ceiling and baguette it is necessary to note the cutting angle of the end face.

If you are interested in the question of how to cut a ceiling plinth without a miter box, and you do not have time to use templates, then you can purchase special corner inserts in advance. They will hide the cracks, but they will protrude and stand out on the coating.

If you have a baseboard made of precious wood, then you need to cut and install it very carefully, since a large amount of putty for sealing joints will be too noticeable, and painting a baguette is an inappropriate solution, because this will hide the natural texture of the array.

Expanded polystyrene products do not need to be adjusted close to each other because of the softness of the texture, but the wooden and plastic models should be well joined.

How to cut a ceiling plinth. Look at the: