How to Cut Skirting Under 45

There is more than enough advice on how to cut a skirting board at a 45 degree angle on the net, the only bad thing is that most of them are given by people who have never done this. Next, from the point of view of practice, I will tell you how to cut skirting boards at the corners with your own hands in 3 versions, and you will learn about both traditional methods and popular universal recipes. 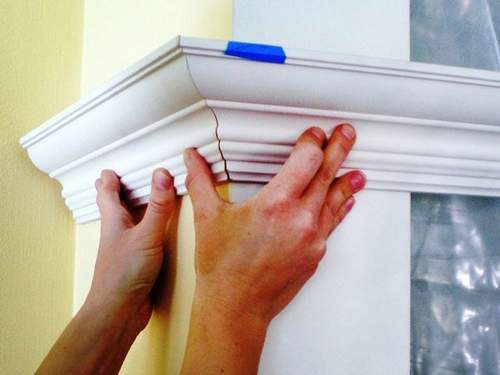 The science of how to properly trim ceiling skirting boards in corners is not as complex as it might seem.

A few words about tools and materials

Skirting boards are now made of wood or of polyvinyl chloride (PVC), in other words, of plastic. Ceiling fillets have a slightly larger list:

The range of ceiling skirting boards is much wider than that of the floor direction.

Since it is impossible to correctly trim the ceiling baseboard and its floor counterpart without a good tool, we will dwell on this issue in more detail.

The best, almost perfect tool for trimming any skirting boards and not only. This is a miter saw with a rotary bed. The high-speed disc makes smooth and precise cuts, and the bed in these units rotates at any angle. The only problem is the serious cost of this tool.

Miter saw is almost an ideal tool for cutting skirting boards and not only them.

It is believed that one of the best hand tools for precise cutting of small bars is a bevel saw. In principle, this is true, but I’ll tell you honestly, a really high-quality saw, even with the current assortment is not easy to find. If you still decide to buy a similar tool, then take a saw with a small tooth.

A saw blade is convenient when working with a miter box.

Theoretically, foam and polyurethane can be cut with any sharp and durable knife. But at the same time you need to have a firm hand and at least a little experience in cutting foam. Plus, wide fillets with a knife are very problematic to cut.

Without experience, making a clear cut with a knife is very problematic.

Personally, in the absence of trimming, I use only a hacksaw for metal. It is suitable for cutting absolutely any material, from foam to wood. By the way, they often ask the question of how to cut a plastic baseboard for the floor, and so. Take a hacksaw for metal and you will not be mistaken.

For cutting skirting boards, a hacksaw for metal is considered one of the best tools.

Three working ways to trim the skirting board

The classic miter box is a U-shaped bed with slots in the opposite sides. A piece of suitable size is embedded in this bed and sawed through the slots in the sides with a hacksaw. The idea is not new, the tool is already several hundred years old, but, despite the simplicity, not everyone knows how to correctly trim the corner of the ceiling plinth with the help of such a miter box.

Not everyone knows how to trim a ceiling plinth in the corner with a classic miter box.

It is easier to work with floor plinths, since the miter box lies on a horizontal plane, it is easier for you to navigate in the plinth position. People most often make mistakes when trimming the ceiling fillet, it is simply incorrectly inserted into the tool. There is a simple but important rule.

At the corner, as you know, 2 sides, so, to make less mistakes, accustom yourself to putting the bar that will be mounted on the right side of the corner into the miter box on the right, and put the bar that is mounted on the left into the miter box on the left. Details about the intricacies of the use of classical miter are described in the in this article.

How to trim the inner and outer corners of the ceiling fillet.

In addition to the classic U-shaped miter box, there are two more types of such structures. This is a professional and rotary tool. As for the professional version, only masters use it. The device is quite bulky, but it rotates at any angle and has a hacksaw that can be locked in position.

Professional miter box with the ability to fix hacksaws and parts.

The swivel fixture can be safely called a “pocket” miter box. Of the advantages here is only the ability to clearly fix the angle of rotation of the bar. On the one hand, it’s easy to work with them. Set the corner, put it on the baseboard and cut it off. But on the other hand, you need to get used to such an instrument, if you do not have experience with a hacksaw, then you should not take a rotary miter box.

How to work with a rotary miter box.

Tip: when choosing a classic U-shaped miter box, firstly do not take Chinese products. And secondly, try to buy models with the ability to rigidly fix the part inside, one of these models is shown in the photo below.

The miter box with the ability to fix the part inside is much more convenient to work with.

Most often, both ceiling and floor skirtings need to be cut to 45º. If there is no specialized tool nearby, then an impromptu miter box can be drawn on a notebook sheet. From the school course of geometry, we know that the diagonal of any square with respect to the base has an angle of inclination of 45º.

You can defer a 45º angle by attaching the baseboard to the diagonal of the square.

Next, you need to draw a square and draw 2 diagonals in it. This will be the desired 45º. You just need to attach the baseboard to the leaf and mark it correctly. True, in order to cut off the skirting board without any guides, you need a good eye and a sure hand.

Undercutting at 45º is a common option, but what if you need a different angle, but only a hacksaw and a pencil are available? It turns out that there is a very simple way out of this situation. Plus, this method is universal, it is suitable for both external and internal corners.

Over, I can assure you that those angles that seem visually straight, in fact, have deviations of a couple of degrees. As a result, you buy a good tool, cut off clearly 45º, and when docking, the “gap” between the skirting boards “comes out”. This problem disappears here. And further on an example, we will consider how to trim a ceiling plinth in the inner corner.

Take the fillet, apply it on one side of the corner and use it to draw 2 lines along the wall and ceiling.

See also  How to Cut Corners of a Wooden Skirting Board

Tip: so that the lines are hardly noticeable, they can be drawn not with a pencil, but, for example, with a nail or the edge of a knife.

Do the same on the adjacent side of the corner.

If you draw a diagonal from the intersection of lines on the ceiling to the inner corner, then you will get the desired cut line.

Next, take the tool and cut it according to the finished marking. If you normally own a hacksaw, then skirting boards should fit together perfectly.

As I already mentioned, the exact same technology can be used to trim the outer corner.

If you tried as best you could, but a small gap at the junction still “got out” do not worry. In wooden fillets, this gap is easily covered with furniture wax. Putty is an excellent way to cover the gap on skirting boards made of polyurethane, polystyrene, plastic or gypsum. Naturally, the color of the composition should match the color of the baseboard.

All cracks in the area of ​​ceiling fillets are sealed with putty.

The wide ceiling fillets are certainly beautiful, but they can only be mounted on perfectly smooth walls. If the plane of the wall with respect to the ceiling is in a wave, it is better to buy narrow polyurethane fillets, they are elastic and will smooth out this shortcoming.

Under the wide fillet you need perfectly flat walls.

Most questions arise about how to trim the wallpaper to the ceiling baseboard. There is nothing complicated here: the wallpaper is glued with a slight overlap on the baseboard and when the wall is completely glued, take a large spatula, apply it in a corner and cut off the excess with a knife.

How to cut your own wallpaper under the ceiling skirting board.

But keep in mind. Neither a knife nor a spatula can be torn off the wall until you have passed the entire plane. That is, they put a putty knife from the corner, cut the wallpaper along the length of the blade, and then moving the blade away from the wall, move and trim until you reach the next corner.

All three methods described by me work, the choice depends on what tool you have available and what are your professional skills. If after watching the you still have questions, welcome to the comments, as I can, I will help.

If you are not confident in your abilities, then for floor and ceiling skirting boards there are docking elements that can do without undercutting.