How to Dilute Gasoline For a Chainsaw Properly 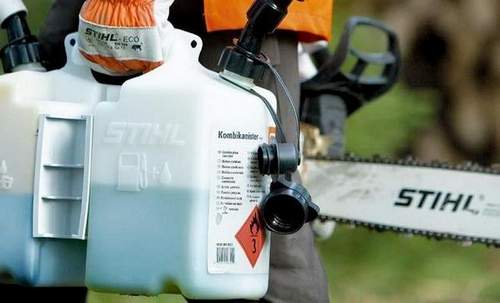 Stihl professional chainsaws are equipped with two-stroke engines requiring high-quality fuel. A dosed mixture of high-octane gasoline and oil, designed for high-speed engine operation. The right choice of gasoline and oil for a Stihl chainsaw is the key to a long and successful operation of this unit.

The first question a user is faced with before starting work is which gasoline to pour into a Stihl chainsaw.

Petrol for Stihl chainsaws is filled exclusively with unleaded high-octane, that is, with an octane rating higher than 90. If filled with low-octane, this is fraught with overheating of the engine, jamming of the piston and engine failure. Therefore, it is optimal to pour gasoline grade AI-92 or AI-95 into a chainsaw, but this raises the issue of fuel quality.

Poor AI-92 may not reach the declared octane rating, and AI-95 often contains many additives that do not bring any benefit to the engine. In addition, if the additives are of poor quality, they do not last long, and after a few days the purchased fuel can turn into low-octane, which is not suitable for the chainsaw engine.

At the same time, a good 95 can harm the piston system. “burn” it. Thus, some users have found a way out: refuel the chainsaw with AI-92 gasoline mixed with AI-95. Thus, an optimal balance is achieved between the octane number and the amount of filler impurities.

Unlike four-stroke engines, Stihl 180 chainsaw oil is poured directly into the gas tank, pre-mixed with gasoline. It is recommended to fill the chainsaw with the oil specified in the instructions for this model.

In no case should you use oil intended for low-speed engines (boats, scooters, etc.).

It can significantly shorten the life of the motor, and if traces of such a substance are found in the cylinder-piston group, the instrument will be deemed removed from the guarantee, i.E. It will not be subject to warranty repair or exchange.

Synthetic and mineral oils for Stihl chainsaws are sold in bottles or cans of different capacities: from 100 ml to 5 liters. Minerals have a lower cost, and semi-synthetic and synthetic ones provide complete combustion during engine operation, i.E., the absence of soot and a minimum of toxic compounds in the exhaust.

In addition, synthetic oils retain their qualities in a much wider temperature range, and also contain special additives that are useful for engine operation: antioxidant, detergent, preservative, etc.

You can choose motor oil for your tasks depending on the model of the saw and its frequency of use: the oil consumption during the operation of the device is low, and given the shelf life of semisynthetic and mineral lubricants, there is a risk of not having time to use even a liter bottle to the end.

So with the small estimated volumes of work, you can not buy a bulk canister, but limit yourself to a bottle. Only Stihl mineral greases do not have a shelf life.

The Stihl saw mixture is prepared by mixing high-octane gasoline and two-stroke engine oil. The proportion of oil and gasoline for a chainsaw is as follows: if the unit’s power does not exceed 1.5 kW, the ratio will be 1:40 (i.E. 25 ml of oil per liter of gasoline), and at a power above this value. 1:50 (20 ml 1 l).

It is necessary to breed gasoline for the Stihl chainsaw in a separate canister, in no case pouring the components separately into the gas tank of the saw. In these engines there is no oil pump and the possibility of its installation, so only finished fuel is poured into the tank. There are even special canisters with two necks on sale to make it easier to dilute the mixture, but you can add oil to gasoline for a chainsaw and an ordinary canister.

It is best to observe the proportions of refueling a chainsaw as precisely as possible: excess oil will create carbon deposits on candles and pistons and will provoke detonation during fuel combustion. This can reduce engine life. In addition, the saw user in this case is forced to inhale exhaust gases with unburned fractions. At the same time, excess gasoline can damage pistons due to insufficient lubrication.

Some craftsmen advise you to use a plastic bottle in case of the absence of special measured accessories: a full cap (from the same bottle) of oil is poured into a half-liter container filled with gasoline. The output is an approximate ratio of 1:50.

The amount of the mixture for refueling is best calculated in advance based on the estimated scope of work and the declared consumption of this engine. The tank volume in most chainsaws is about 0.5 liters, a 2 kW engine will consume about 1.2 liters per hour of operation (more precise saw characteristics can be seen in the instructions). Thus, it makes no sense to prepare the mixture in volumes exceeding 3 dressings in a row.

Before starting to prepare the mixture, it is recommended to thoroughly clean and dry the neck of the canister and the area around it to avoid the ingress of impurities: dust, water, etc. The same is done with the tank before refueling: the lid and neck are cleaned of dust and adhering dirt, so that it does not get into the gas tank, and then into the engine.

When calculating the proportions, remember that it is better to pour oil a little than to save on it: the formation of soot is dangerous only to a significant excess of lubricant, and a slight excess will not harm the engine. If it is not enough, the consequences can be more dangerous.

When mixing fuel for a Stihl chainsaw, the manufacturer recommends first pouring oil into the canister, then adding gasoline and then vigorously mixing the components. But the practice of use shows that the oil can “stick” to the walls of the canister and mix poorly, so it’s better to carefully pour the oil into gasoline and mix.

It is better not to leave the remains of the fuel mixture in the tank in order to extend the life of the sealing gum and other parts subject to chemical damage. After the saw stops, the fuel must be drained and disposed of: with long-term storage (more than a month), the octane number and other physicochemical properties of the mixture decrease and it becomes unsuitable for safe use.

In addition, after the gas tank is empty, you need to start the saw engine and let it idle until it stops on its own. This will mean that the carburetor is also spared the rest of the fuel mixture.

It is important to remember that the long-term operation of the equipment is largely dependent on the user. Saving on fuel in the case of a chainsaw in the future can be much more expensive. Non-warranty repair of a failed saw or the purchase of a new unit. Compliance with the manufacturer’s instructions in most cases helps to understand the principles of the device and to extend its trouble-free and trouble-free operation.