How to Distinguish Chinese Stihl 180 from the Original

Only a high-quality tool is able to perform its functions without fail for a long period of time. Stihl chain saws are no exception. This company has long been considered one of the leading players in the global market for gas powered tools, which, in turn, has become the main reason for the massive spread of fakes. What is the Chinese Stihl, how to quickly distinguish a fake and what is better to choose. These are the main points that we will consider in this article.

Initially, chainsaws of this brand were produced only in factories in Germany. But modern realities are such that almost all world companies partially or fully began to produce their products in China for economic reasons. In order to reduce costs in 2012, part of Stihl’s production was moved to Qingdao, China. Initially, MS 170 household models were produced there with tires 30 and 35 cm long, but over time the range has increased significantly.

Currently, almost all models of Stihl gas saws, just like the other tools of this company, are made in the Middle Kingdom. 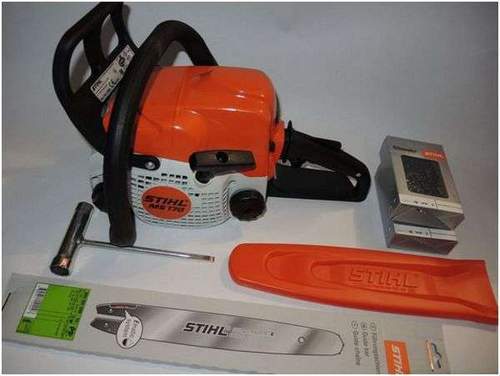 Quality of Chinese-made Stihl chainsaws: is there any difference from German

The build quality of the Chinese Stihl saws is practically no different from the German. This is due to strict adherence to production technology and meticulous exit control.

On the crankcase of the Chinese chainsaws, as well as in the German ones, there is a small stamp “TR” or the letters “QC” are applied to indicate that a factory test has been carried out (Test Run) or to confirm quality control (Quality Control).

Who to prefer: China or Germany

Despite the fact that the build quality of the cutting tool is almost identical, there are still differences between the saws. A key feature of the Chinese chainsaw is the not very good quality of the materials used in the manufacturing process. This is especially noticeable when comparing, for example, the air filter housing: the Chinese is made of cheap plastic and this is noticeable with no armed eye.

It is also worth noting that for some chainsaws made in China, the following disadvantages are characteristic:

At the same time, Chinese Stihl has several advantages:

If you use the saw strictly for its intended purpose, in other words, do not try to cut down the forest with a garden chainsaw and maintain it in time, then it is difficult to notice the difference between production in China or Germany.

Where to find the German Stihl chainsaw

The purebred Stihl, with the coveted inscription “Made in Germany”, can only be purchased from authorized representatives of the company.

How to distinguish Chinese Stihl from German

How to Distinguish Chinese Stihl 180 from the Original

Each model has a number of its own characteristics, but there are signs that allow you to quickly determine the country of production, in particular, this is the serial number. If it starts at number 8, then the country of manufacture is China. A German-made instrument is marked with a serial number starting with the number 1.

It is worth noting that Stihl’s manufacturing facilities are also concentrated in America and Brazil. The instrument serial number from these countries starts with the numbers 2 and 5 (USA) and 3 (Brazil).

See also  The Screwdriver Battery Does Not Charge From The Charger

Regardless of the country of manufacture, the serial number should be the same on the saw and on the box. Otherwise, this is clearly a fake.

Great interest in any good product on the part of buyers causes an increase in the production of fake products. Russian branded service centers and ordinary repair shops daily refuse to repair falsified chainsaws.

How to distinguish a fake Stihl chainsaw from the original

There are several factors that make it possible to determine the original factory tool from a “gray” saw in a matter of minutes.

It is with a thorough external examination that you can identify a fake.

If in appearance it is difficult to determine the originality of the chainsaw, then you should carefully examine the components.

In addition, on a fake you are unlikely to find the inscription “Made in China.”

How much does a fake Stihl cost

Is it worth buying a fake

Perhaps the only thing that could be dumber than buying a fake Stihl chainsaw is to contact a repair shop. But such a day will clearly come: scuffs in the cylinder, coming as a mandatory option, constantly falling power, an uncontrollable circuit.

Of course, there are exceptions to any rule. Small, but still, there is a chance that it is not clear where and by whom the saw made will last a long time.

How to distinguish the original Stihl 180 from a Chinese fake is described in the following:

If you need to use a chainsaw for several days, then you can purchase a Chinese fake. Such a tool should not be dropped by LAL-KO, “chained” by nails, or poured anything into the fuel tank. And to work with them is much more effective than hands.

If a chainsaw is needed for a long period and is bought specifically for work, and not for storage in the attic, then there can be no talk of any fake. Chinese Stihl is an excellent option for chainsaw for domestic use: the presence of a guarantee, build quality, adequate price. Everything is typical for this tool. German Stihl is preferred by people involved in the field of wooden housing construction and logging, as it is still a little more reliable.

Before buying a Stihl chainsaw, you should determine for what specific work it is needed and how often it will be used. This is the only way to choose the best option and not overpay the extra money.