How to Eliminate Early Ignition on a Trimmer 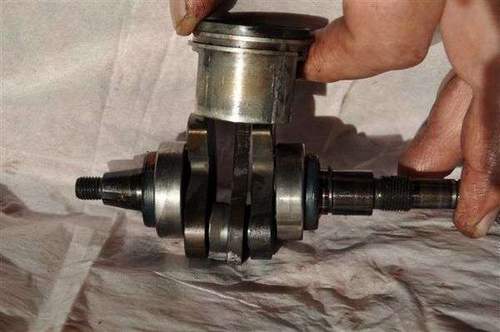 1. First do-it-yourself chainsaw repair: dropped out retaining ring piston pin (during the repair of a Chinese chainsaw, it is necessary to disassemble the engine completely, change all gaskets, change the piston pin retaining rings, piston compression rings, eliminate scuffing on the piston and on the cylinder mirror or on the chrome or nickel-plated coating of the inner surface of the cylinder).

2. Do-it-yourself chainsaw repair: a hot chainsaw stalls at idle and during relapses (the reason is problems with fuel intake, see the carburetor and fuel line for troubleshooting a chainsaw).

3. Flywheel unscrewed and broke the shaft (another do-it-yourself chainsaw repair).

7. Chainsaw malfunction: burned out brake tape (and melted the lid).

9. That part broke off drum starter, where the spring engages.

10. Burnt out gasket under the muffler.

Eleven. DIY chainsaw repair: rusty needle bearing inside the clutch drum (it must be cleaned, washed and greased so that the chain does not rotate at idle, the clutch is unscrewed clockwise).

12. The plastic broke starter axis (can be replaced with a metal bolt).

14. Broke down starter drum (to prevent this from happening in the future, it is necessary to replace the factory round rope with a flat nylon rope).

Fifteen. Repair of a Chinese chainsaw: in the exhaust window of the cylinder (under the muffler), check and if so, file away tooth ledge metal, as over time, this protrusion will damage the piston and rings.

16. Change the gasket between the halves of the crankcase (put a thickness of 0.2 mm, instead of the one that is now 0.5 mm thick) to exclude air leaks into the crankcase through loose seals.

17. Need to redo fuel tank valve (from the factory, he works to rarefy in the tank, and when the tank is heated during prolonged sawing and, accordingly, increased pressure in it, the chainsaw starts to work unstable). We need to remove the chainsaw handle and see a white cap on the tank, we need to remove it, remove the black rubber under it, pierce the cap several times with an awl, collect it and that’s it. Gas will not pour out when tilted, and the tank will bleed off excess pressure.

18. Do-it-yourself chainsaw repair: pour a candle, “eat” gasoline, sucks air into the tank (leaky sump. It is necessary to check the seals on the crankshaft).

19. Tearing rope the starter when you turn off the chainsaw (early ignition. Remove the starter and check if the nut is tightened on the shaft, check the fastening of the ignition coil).

See also  How To Install A Protective Cover On The Trimmer

20. Lacerates at idle speed (you need to add speed with the “T” screw and screw the “L” screw all the way, then unscrew it by 1.5 turns, eliminate the air leakage between the carburetor and the cylinder).

21. DIY chainsaw repair: the spark is gone (out of order ignition coil)

23. Right away replace chain on the calm.

How to Eliminate Early Ignition on a Trimmer

When the chainsaw is planted, the fuel mixture flies out of the carburetor, the engine certainly will not start, why does this happen, who knows? I read that there is some kind of inlet valve that does not allow the fuel to be squeezed out of the crank chamber into the carburetor. Maybe he broke, and nobody writes where he is.

Hello. I’ll tell you a little about DIY chainsaw repair, i.E. About his seven years of experience with the Chinese Goodluck chainsaw. I bought it as soon as they appeared on the market. The number on the chainsaw is present. It is applied by engraving, which means that it was brought to the country as a chainsaw (tobish is assembled in a celestial factory), and this is a huge plus. Those chainsaws that are sold without a number are imported for spare parts and are assembled somewhere in the basement, and this is a minus. Further. He used XADO oil in it and still use it. Repair of a Chinese chainsaw. Regarding your malfunction of the chainsaw, I can say the following. Of course, I’m not special (but from the point of view of banal erudition) I will say: On those Chinese chainsaws that came into my hands there was never a check flap valve between the cylinder and the carburetor. And the intake valve is in the carburetor itself. If during the repair of the chainsaw with your own hands, remove the bottom cover of the carburetor (it is MANDATORY to remember, and it is better to photograph each operation in order to collect everything correctly), we will see a rubber membrane with a metal washer in the middle of which (during operation) one part of the rocker arm of the intake system abuts valve. The principle of his work is as follows. When the piston in the cylinder moves, either pressure or vacuum is created under the piston, and these drops are transmitted through a certain channel (hole) to the carburetor chamber where this membrane is located. She moves from the pressure drops. Thus, pressing on the rocker then opens, then closes the inlet valve which supplies a certain part of the fuel to the carburetor through the nozzle (hole) which opens and closes the valve attached to the other end of the rocker. So here. If in this hole, something got caught and stuck (stuck), then the valve does not close and therefore it turns out that the fuel constantly flows into the carburetor (underdosed) and it gets VERY much. So much so that it even flies back through the carburetor. Accordingly, there is a lot of fuel, it fills the candle and the saw does not work.DIY chainsaw repair, i.E. How to eliminate. If you are confident in your abilities, you need to disassemble and clean (with non-metallic objects) and then rinse with gasoline and blow through the entire carburetor. Put everything back (assemble). Check tightness of all connections and their tightness. Further. Unscrew the candle, turn the saw down with the candle hole down (with the ignition off) and chop the saw with a starter 15 times in order to remove the gasoline accumulated from the overflow from the chamber under the crankshaft. After that, light a candle and you will be happy. If you are not 100% sure of your abilities, then my advice to you is: Contact a specialist. Chinese technology is not so bad as they say. Verified by personal experience. Repair of a Chinese chainsaw. All the best to you.

About DIY chainsaw repair. Forgot the most important thing. It is necessary to fill in clean gasoline (filtered through a mesh that does not allow water to pass through) and it is NECESSARY to seal the junction of the air filter with the carburetor so that there is no suction of small chips into the carburetor. I put an additional rubber ring of a suitable diameter in the groove of the filter. Now it is tightly pressed by the nut that is on the lid. Gum found on the market, on the layout.

Hello. The Chinese Taiga bindersaw, the kickstarter broke, put a new one, after an hour of operation the clutch loosened up, put it in place, when re-factory the clutch shattered into pieces, put the new clutch in, did not start, checked the candle. It was filled in, dried, cleaned the air filter and muffler , it does not start again, sneezes, squeezed gas and tried to start it, I pull the starter cord smoke, 5 times I pulled the clutch with the clamped gas untwisted, twisted it, cranked it with my hand when turning the smoke from the muffler.

DIY chainsaw repair. What do you mean by saying that the clutch is “untwisted”? Did it twist along the threads from the crankshaft shaft? If we are talking about one clutch. I think about the clutch that is on the right side and the leading star is on it. It should not (in principle) unscrew during the operation of the chainsaw. Because there must be a left thread. Tobish at work, this node should be tightened, and not unscrew. If the opposite happens then there is some kind of marriage. Ask more about repairing a Chinese chainsaw. How can I.

See also  Which Disc For Trimmer is Better

A rare metal ringing appeared in the chainsaw. It was as if something had unscrewed somewhere. But it worked. But yesterday during operation it rang violently and the chainsaw died out.

Hello! The Chinese Stihl ms 280 chainsaw, the problem is that the hole gets clogged very quickly to lubricate the chain (right at the start of work) and thus the chain is not lubricated! I don’t know how to troubleshoot a chainsaw.

Which hole? If what is on the tire itself and is clogged with small chips, then the advice is as follows: When you start sawing logs, immediately add gas, then saw off a piece and only when it has ceased to dump gas at idle. If for any need it is necessary not to finish it to the end, then the gas is not discharged until the entire tire is taken out of the cut. This is necessary so that small chips do not fall under the teeth of the chain. The chips are correct and the whole flies out only at maximum speed. And further. Each time you finish sawing and intend to leave the saw alone for at least a few days, you must definitely remove and clean the air filter and remove the tire inside of the chip. If this is not done, the oil shavings swell and block the correct access of oil to lubricate the chain, because of which, over time, it may be necessary to repair the chainsaw with your own hands.

Hello! The saw did not start, there was no vacuum in the tube from the crankcase, the oil seal on the clutch side was torn. After replacement, the saw starts up poorly and only with the throttle fully open, it works only at high speeds, you start setting the quantities normal with the screw, it stalls. Karb, changed it from a working saw, put a new ignition unit. The seals are both new, the gasket under the cylinder is new paranitic, what else to do?

Check the gasket under the carburetor and heat insulator.