How To Insert A Drill Into A Hammer Drill

How to insert a drill into a hammer drill and how to remove it? 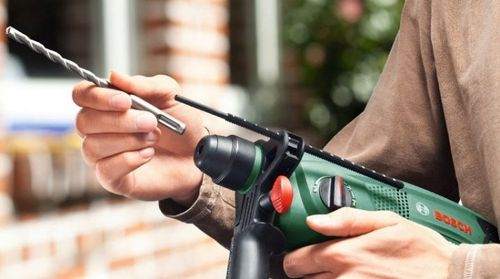 With the advent of reinforced concrete structures, no internal or external repair is complete without a hammer drill. There is a wide variety of such devices on the market. However, the basic mechanisms work in about the same way. This statement is true primarily for the drill resetting process.

How to insert a drill

The hammer drill itself also has a quick-release mechanism. Reliable fastening of the drill in it is ensured by fixing with the help of special balls, which, when closed, fit tightly into the grooves on the bottom of the drill.

In order to fix the required nozzle, be it a drill or a crown, you must:

And in order to insert the drill into the hammer drill using an adapter, first fix the removable chuck, which has a mount at the base with grooves for the tool. Then the drill is installed directly. To remove the drill or drill, you need to perform all the above steps again.

Here I would like to note that any manipulations for installing and removing a drill or other nozzles are preceded by a check of the operating condition of the perforator mechanism. To do this, the unit must be connected to the network and, having set the required operating mode, press the start button. If the unit does not emit unusual sounds and, at the same time, no extraneous smells of burning or burnt plastic are felt, then the tool is ready for use.

With a hammer drill, you can make a hole in almost any material. This device is most often used when working with concrete, brick and metal, less often with wood.

The variety of materials assumes several operating modes and a large number of attachments:

The main difference is their purpose.

Drill nozzles are designed for drilling punching operations with high strength materials. In this case, the hammer drill performs not only drilling, but also impacts or vibrating actions. Drills make neat holes of the required depth and diameter in the surfaces. Crowns are used for drilling large holes. For example, under an outlet. Installing a chisel or blade assumes that the tool works like a jackhammer.

A significant difference is the type of attachment, which for all attachments, except for drills, is suitable exclusively for a hammer drill, since it has a landing tail, mounts in the form of grooves for this tool.

But you can also fix a conventional drill from a drill in a hammer drill. This requires an adapter called a removable chuck. This device is of two types:

See also  Disk nozzle on a drill for metal cutting

The name of the type itself determines the type of drill clamping mechanism. The cam clamp is driven by a special wrench that is inserted into the thread on the outer perimeter and turned. In this case, the collet mechanism installed inside the chuck is compressed or unclenched, depending on the direction of movement of the key.

The quick-release type is operated by a small hand force. Pressing the chuck downwards opens the drill hole.

If the drill gets stuck

There are times when the working tool gets stuck in the chuck and does not want to be pulled out. Here you need to know the following. To carefully pull out the bit, you need to clamp its free part in a vice and knock on the chuck’s jaws with a hammer through a wooden guide until the drill tail comes out of the keyless chuck. If the drill is stuck in the hammer drill firmly, and this does not help, you can remove the chuck and put it in gasoline, and drop some automotive oil into the key chuck.

Also, there are often situations where the drill gets stuck in the wall during construction concrete work. This occurs during clamping between concrete and reinforcement. Stop pulling the trigger and wobbling the hammer drill as it may break. To get started, remove the drill from the chuck, replace it, and start gently punching out the concrete around the stuck drill. Avoid hitting a jammed drill. After this procedure, the stuck drill can be removed without difficulty.

Choosing a drill for a hammer drill

Today drills are made from carbon steel, high speed steel and alloy steel. If you have to work with tough materials, the drill can be equipped with heavy-duty tough soldering. Drills can be nib, centering, straight flute and spiral (for deep drilling).

You can also purchase a drill designed for wood, metal, stone, concrete, glass, ceramics, diamond, or a universal option. Before fixing the drill in the hammer drill, you need to decide on the type if you want the work to be done correctly. The color of the drill indicates the type of end result.

If the drill is colored black, it means that it was processed with superheated steam, but this does not affect the quality, despite the popular belief that black drills are stronger. If the drill has a brown or slightly golden hue, it is likely to have been tempered to relieve internal stress. Drills that are treated with titanium nitrile have a bright gold color, such options are the most expensive and durable.

As a rule, good companies indicate on the drill boxes its characteristics, such as the steel grade and the material with which you can work. If the drill gets very hot during operation, it means that it is dull or was sharpened incorrectly.

What is a puncher

Before installing a drill in a hammer drill, first of all, you should understand. Today it is difficult to finish repairs or construction without resorting to the help of a hammer drill. When drilling is needed, this tool is simply irreplaceable. The hammer drill is used when working with concrete and brick, and it is also often used for metal or wood work as a conventional drill.

Many functions make this tool versatile. Impact rotation, non-rotation impact, non impact rotation, drilling in concrete, jackhammer function, drilling in wood and metal and many others. You need to know that there are many types of rock drill. The principle of using the tool is the same, but if you need to drill a wide and deeper hole, it is better to use a larger and more powerful tool.

How to correctly insert and pull the drill into a hammer drill, screwdriver and drill

The popularity of the question of how to insert a drill into a hammer drill or an electric drill is explained quite simply: such devices are actively used both in industrial and domestic conditions.

The cartridges are different, as well as the attachments fixed in them.

An incorrectly installed drill can lead to a number of problem situations:

Despite the fact that it is not so difficult to insert a drill into a hammer drill or drill, this issue should be approached responsibly.

Installing the working tool on the hammer drill

As mentioned above, the hammer drill must be checked for operability before installing the drill. To perform this check, the hammer drill is set to drill without knocking. If, after pressing the start button of the device, you hear and feel that its engine is running smoothly and without jolts, then the hammer drill can be used for its intended purpose, having previously inserted a drill or drill into it.

To mount a drill with a cylindrical shank in a hammer drill, use an adapter with a jaw-type chuck

Before inserting the drill into the hammer drill, it is necessary to treat the shank of the working tool with a special grease that will protect it from corrosion. The very procedure for installing a drill into a hammer drill is as follows.

Press until it clicks, then pull the drill, if it is not removed, everything is fine

Considering the fact that the chucks on modern rock drills differ in a fairly simple principle of operation, there are usually no questions about how to get the drill out of the hammer drill.

Having removed the used tool from the punch in order to replace it with another, it is advisable to immediately clean its shank from grease and construction dust. The shank of the drill that you are going to insert must also be cleaned and pre-lubricated. A tool replaced in this way will not damage the clamping mechanism of the hammer drill and will last much longer.

Using a perforator, you can not only get a drilled structural element, but also perform processing using a special chisel. You can also install a mixer as a working element of such a device.

DIYers often also have questions about how to insert a drill into a screwdriver or how to change a chuck on a hammer drill. It is quite simple to solve the first question, since the design of the screwdriver uses cartridges of the same design as on drills and hammer drills. But the question of how to properly replace a cartridge on a perforator should be approached competently: it is not easy to perform such a procedure without having certain knowledge and skills.

See also  How to change the bearing on a rock drill

Correct installation of the drill in the drill chuck

When the sleeve is rotated clockwise, the cams simultaneously approach each other, thereby reliably clamping the shank of the drill to be installed. Accordingly, the question of how to pull the drill out of the drill is not difficult to solve: it is enough to start rotating the sleeve counterclockwise. This will cause the jaws to open, making it easy to remove the drill from the drill. It should be borne in mind that before installing the drill, the cams should be released with a margin, in which case the tool can be easily inserted.

The convenience of using cam-type chucks lies not only in the promptness and high reliability of the tool installation, but also in the fact that drills of almost any diameter can be inserted into them. When using such chucks, there is usually no difficulty in changing the drill bit in the drill. Correctly inserted tools are held securely in these chucks and allow a precise hole to be drilled.

If you begin to notice slipping of the teeth when tightening the chuck, replace the worn out key with a new one

Jaw chucks are used in both industrial and household drilling tools. Clamping devices for household drills are available in two drill diameters: 0.8 to 10 and 1.5 to 13 mm.

In the first case, the sleeve is activated using a special key, on the tapered working part of which there are teeth. The key to activate the clamping mechanism must be inserted into the holes on the side of the chuck body and rotated. There may even be three such holes in some models. Accordingly, in order to loosen or tighten the cams, the key must be inserted into each of them and start rotating counterclockwise or along it.

After loosening the cams with a key, it is necessary to turn counterclockwise the chuck itself, which will increase the distance between the cams to the required value. The inserted tool is fixed in the reverse order: first, the chuck itself is clamped (when it is rotated clockwise), and then the sockets are clamped with a key.

Removing and installing drills is much easier and faster when using the keyless chuck. In it, the sleeve is driven by hand rotation. To limit the retraction force of the cams, they are often equipped with locking elements.

Before inserting the drill, first make sure the drill is in working order and disconnect the power supply. Only then can you start installing the drill.