How to Make a Chainsaw Generator

At all times, there were craftsmen who could make something truly amazing from seemingly everyday things. Thanks to such people, the development of science and technology does not stand still, but strides forward by leaps and bounds. In the event that there are no innovative ideas in your head, and the desire to do something with your own hands does not give rest, then you can start with existing and proven practice. Homemade chainsaw for such a situation fits perfectly. 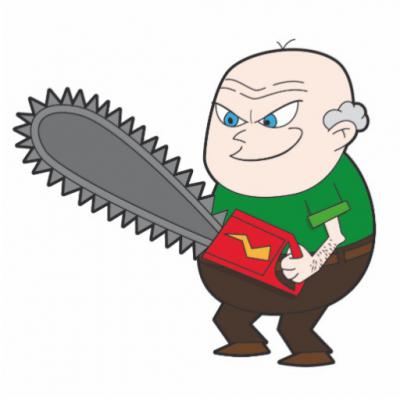 Today you can find many ways to use a chainsaw for other purposes. There are a lot of things that can be done with this tool, as well as from it. Looking at some devices, I want to exclaim: “How could I not have thought of this before ?!”

The engine is the main technological link on the basis of which homemade can be done. From chainsaws have already learned how to design the following useful devices:

These are only the most common and popular options. Below will be presented more detailed information on some transformations.

Sawmill is a homemade chainsaw, which does not require much effort, but it can greatly facilitate the process of sawing logs into boards. We can say that in this case, the saw in a somewhat modernized state is used for its intended purpose.

It is almost impossible to dissolve a long log on weight. The problem can be solved elementarily. This will require, firstly, a metal frame on which the saw will be rigidly mounted. Secondly, the rail track along which the workpiece will be fed.

This conversion is somewhat different from that described previously, since here the very purpose of the device changes. It is proposed to use the tool motor not for cutting anything, but for moving in space. Of course, homemade products from the Ural chainsaw will by no means be able to compete in power and speed with the motorcycle of the same name, but the moped will turn out to be quite functional.

The owners are very proud of this means of transportation. It’s not about the driving characteristics of their offspring, but in principle. A moped assembled “on the knee” shows the skill and thrift of a person, demonstrates his golden hands to everyone.

The base of such a vehicle is an old bicycle, on the frame of which a motor from the same ancient chainsaw is mounted. To transmit energy, gearing is most suitable.

Some enthusiasts go a little further in their research and take a mountain bike as the basis of a makeshift vehicle. In this case, it will be possible to control the speed of movement. To do this, you only need to equip the moped with a gearbox.

You can list for a long time in which fields of activity homemade chainsaw are used. The friendship of people with land in our country has led to the fact that such “masterpieces” quite often used in suburban areas as motocultivators.

As far as this device is useful in everyday life, it is so easy to assemble. To do this, you only need a transmission system consisting of a pair of gears. With it, engine energy will be transmitted to the drive wheel, driving the working mechanism. The disadvantage of this design is the small capacity, which will not be enough to plow the virgin lands, but for a small well-groomed area it is quite enough.

A portable power station capable of providing energy to a person located in the most remote places from civilization is one of the wonders of engineering.

Such a homemade chainsaw can be designed by a person who is at least a little versed in mechanics and electrical engineering. The list of accessories should look like this:

Since winters in the middle lane are very severe, and there is no shortage of snow, everyone wants to enlist such an assistant as a hand-held snow blower. This is a doable task. The whole point is the principle of the engine, which is based on the fact that its rotational energy can be used for any purpose.

Under the snow blower, a chainsaw with a capacity of 3 kW can be redone. All the trick will only be how to mount the screw assembly. Its blades should be made of durable, but at the same time light enough and elastic material, such as rubber. Further actions do not differ at all from what was described in other paragraphs. Using a chain, the motor is connected through a gear pair with a screw assembly. From a practical point of view, it will be correct to use sled runners instead of wheels, and take a curved water pipe of large diameter as a snow thrower.