How to Make a Drill Out of a Chainsaw

An ice drill or a motor drill is a useful household tool designed to quickly make holes of a certain diameter in ice or soil. The simplicity of the design and the principle of operation makes it possible to make an ice drill for everyone, using a household chainsaw for this.

Preparing for assembly of equipment

To make a homemade ice drill from a chainsaw, you need to prepare all the materials and equipment required for the job. It’s best to do this in advance so that you don’t waste time searching for the missing part during assembly.

To work, you will need:

A stationary lathe may also be required for operation. With it, the owner of the chainsaw will be able to fit any part used to the dimensions required for assembly.

Before assembling equipment from a chainsaw, you also need a circuit. It should describe in detail the dimensions of the parts used, as well as the method of their installation in the drill device from a chainsaw. 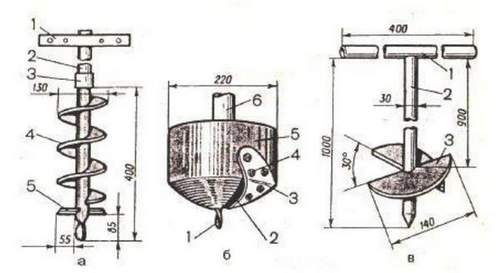 After preparing the necessary equipment and studying the drawings, you can proceed directly to the assembly.

How to make an ice drill from a chainsaw with your own hands?

A chainsaw drill is assembled in several stages. Each of them must be treated carefully. Otherwise, there will be a risk of quick breakdown of one of the important elements of the device.

How to choose a gearbox?

First you need to choose a gear for a chainsaw for a drill. When buying an item, you should consider such important factors as the power of the chainsaw engine and the size of the drill. It must be remembered that the motors of most gasoline tools have high power. If during operation the motor-drill from a chainsaw rotates at too high a speed, then it will not be possible to work with it. At the same time, if the gearbox begins to transfer too low rotational force to the used output shaft, then there will be very little benefit from using a gasoline tool. For these reasons, it is necessary to make accurate calculations of the gearbox parameters.

In most cases, in addition to the gearbox, a power take-off shaft is installed on the Yamobur from a chainsaw. It regulates the speed of the engine crankshaft without loss of power. This makes it possible to make the drill more efficient, and reduce the amount of fuel consumed by the motor.

The chainsaw nozzle for ice drilling must be equipped with a reliable housing. This element of the device will protect all internal parts of the equipment from mechanical damage, as well as dust, debris and moisture entering the structure. For the manufacture of the housing, metal pipes must be used, on which there are no traces of rust or other defects. The pipes will need to be bent in the form of frames.

This is done in the following order:

In the same order, you will need to make another frame, the perimeter of which should be about 40 cm. Then you need to connect the two frames so that the distance between their planes is about 35 cm. When assembling the frame, make sure that its corners are installed pieces of metal pipes of approximately the same size.

The result should be a body with the shape of a quadrangular uniform truncated pyramid. Inside it, you will need to securely fasten the engine from the chainsaw, as well as the gearbox and other elements of the drill.

The result of previous actions was a previously removed engine from a chainsaw, as well as a reliable housing, inside of which a gearbox is located. The existing elements will need to be interconnected. To do this, you need to consider the method of their connection.

If the motor in the future will be used exclusively for drilling holes, then a drill from a chainsaw for land or ice can be made in the form of an integral structure. In this case, the engine used will not be removed, and its fastening will be more reliable.

If the motor will sometimes be removed for mounting it back onto the chainsaw, then its mounting will need to be made removable. This option is more practical to use, however, mounting the engine in this case will be less reliable.

To make a removable mount, in the manufactured housing you need to make a large hole for fixing the motor. Its diameter should be the same with the dimensions of the internal combustion engine used. Next, you need to carefully consider the engine mount. It should be as reliable and time-saving as possible. It is best to use a few bolts and nuts to fix the motor. In this case, the drill owner only needs to unscrew the bolts, lift the housing cover and carefully remove the motor.

During the planning of mounting the engine, free access to the tanks for refueling with fuel and engine oil should be provided. The owner of the drill must also have access to the valve, which is needed to adjust the pressure in the engine cylinder.

It is best to equip a drill for fishing with an engine from an old chainsaw. This motor can be installed stationary, and do not remove it throughout the life of the drill. To mount the old engine, a frame is required. It should be on top of the equipment. When installing the motor on the frame, you will need to withdraw the neck for filling fuel and oil. In the same part of the device you need to install an emergency switch. This element is very important in cases where the drill will be used not only for ice, but also for the earth. An emergency switch will make it possible to turn off the equipment when the soil is too hard.

Most often, for the manufacture of a drill, motors from Ural chainsaws are used. These internal combustion engines require minimal modifications. The only negative is that only middle and tall people can work with these engines.

The working nozzle of a homemade drill should be securely fixed. There are several ways to do this. The first one is to use the pipe on which the gearbox and drill used are mounted. An important advantage of this method is that if necessary, a damaged element can be quickly replaced.

The second method is more difficult to perform, however, it will make it possible to drill not only in the vertical, but also in the horizontal direction. To do this, you need a frame made of a metal pipe. In the future, you will need to weld another segment of the vertical pipe to the frame. It is also necessary to weld several metal rings to the finished body. There should be no gaps inside the rings. When installing the drill bit, you need to put the rings on a vertical pipe. After that, you can start operating the drill from a chainsaw.

There are two drawbacks to this method. The first one is to increase the weight of the equipment, and the second is the difficulty in working due to the vertical pipe.