How to Mow Grass Properly with a Trimmer

With the onset of spring in the suburban areas and adjoining areas of private homes vegetation appears to be eradicated. If this is ornamental vegetation, then it needs to be mowed with a lawn mower, and for mowing weeds and large thickets, grass mowers and trimmers are used. These are prototypes of hand braids, the use of which requires some skills. How to mow the brushcutter correctly according to the instructions, not many experts know. If you ask yourself this question, then it’s time to understand the rules of mowing.

Getting to know the tool

The question of how to mow with a brushcutter and a trimmer is mainly asked by beginners who have recently acquired these tools. Before proceeding with the work, it is recommended to know the design and structure of the brushcutter. The main structural elements of the considered tools include:

In addition to gas trimmers, manufacturers also produce electric and battery analogues. The main disadvantage of gasoline units compared to electric and battery packs in their large mass. The weight of gasoline-type trimmers reaches 8-10 kg (4-stroke), which depends primarily on power. To simplify the operation of the tool, manufacturers supplement their units with special belts, which are also called unloading belts.

You need to know the design of the tool in order to learn how to work properly. Unlike electric and battery-powered counterparts, gas trimmers need not only to be able to mow grass, but also to start the engine.

What nozzle to use for mowing grass with a brushcutter

The design of the brushcutter uses two types of cutting nozzles or mills. These are reels with fishing line, as well as steel or plastic disks. What is better to choose for work with a gasoline tool. The site provides information on how to choose discs and fishing line for trimmers, as well as their types and design features. We will briefly consider what types of cutting mills should be used on trimmers and benders.

The choice of cutting mill depends on the place of use of the tool. If you plan to work on a personal territory, then a fishing line is selected, and for cutting grass in a field or steppe, discs with 3-4 blades or more, as well as discs with small teeth, are used.

How to attach a disc or fishing line to a trimmer

The cutting mill is attached to the actuator. The mounting location is called the gearbox. The task of installing a disk or coil is not difficult to cope with. The principle of fixing the cutting discs to the trimmer is as follows:

In the opposite sequence, the disc is removed and replaced on the trimmer. In more detail about how to install a reel with a fishing line on a brushcutter, see this material.

Before mowing grass with a brushcutter, it is necessary to refuel the tool. Gasoline and oil are used as fuel. However, keep in mind that mixing gasoline with oil is only necessary for two-stroke engines. Four-stroke engines run on clean gasoline, as their design has a separate tank. An oil sump. There are no oil sumps in the design of 2-stroke gas trimmers; therefore, only gasoline and oil should be poured into the tank.

It is recommended to use AI-92 fuel as gasoline. In order not to make a mistake in the choice, you need to read the instructions offered by the manufacturer. Often, most manufacturers recommend using AI-92 fuel, and only a few recommend filling AI-95.

Gasoline must be diluted with a small proportion of 1 to 25. This means that for 1 liter of gasoline you need to add 40 ml of push-pull oil. However, here, too, is not so simple. The proportion of 1 to 25 is universal, but for each model of the tool has its own values. These values ​​are also indicated by the manufacturer in the instructions. Details on how to properly dilute gasoline and oil in a brushcutter are described here. After diluting gasoline with oil, you should fill a full tank, and proceed to work.

Before you work with the tool, you must first get it. How to get a brushcutter, consider in detail. To begin with, the tool should be placed on a flat surface so that the disk mounted on the shaft does not cling to anything. After that, we start starting the engine of the brushcutter:

See also  How To Install The Knife On The Trimmer

The above instructions for starting the engine and trimmers are appropriate for a cold start. If a pause was made during the operation of the tool, then when restarting a cold engine, it is not necessary to close the throttle. You just need to turn on the ignition, and pull the starter handle.

Launching petrol-cutters is required mainly on the ground. Some craftsmen are able to start the instrument, holding it in their hands, however it is quite difficult and dangerous. After starting the tool, you can start using it. To begin with, you should wear protective clothing and an unloading belt. Depending on the model of the tool, the unloading belts may be on carabiners or couplers. If a carabiner or latch is used, then after starting the engine, the tool should be fixed and set to work. If screeds are used, then you need to put on the belt with a working tool.

The belt must first be balanced. This means that, despite the total weight of the tool, the mowing hands should have a minimum load. With his hands, the mower only carries out the movement of the tool, and if balancing is not done, then quick fatigue will be observed during operation. All weight should fall on the shoulders of the employee. 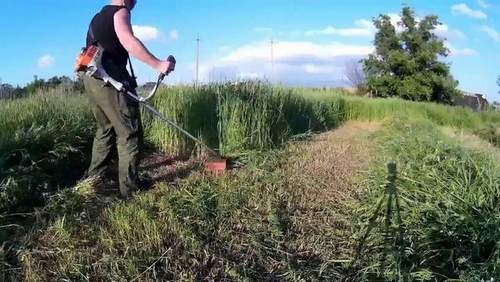 When the tool is ready for use, the instructions for cutting grass with a brushcutter is as follows:

Often among the mowers with scythes, there are disputes about how to correctly mow with a trimmer, whether it is necessary to discharge gas or is it better to work in constant mode. We will deal with these issues in detail.

See also  How To Install A Disk On A Petrol Trimmer

If you mow the braid in the same speed mode (as beginners usually do), this will affect the increase in fuel consumption and engine overheating. For comparison, you can imagine the work of a chainsaw. The saw cutter gives maximum speed only if necessary, but when the sawing of the tree is completed, the chainsaw runs on the twentieth, thereby cooling it.

How to mow with a scythe with fishing line

Is there a difference between grass mowing with a disc and fishing line trimmer? In addition to security, there is a difference in the principle of operation. You can work with a scythe with the fishing line fixed in the structure on the reel in constant speed mode. This is due to several reasons:

It follows that it is possible to mow with a scythe with fishing line at constant speeds, but it is important to consider that the speed should not be higher than average. If the fishing line does not cope with the grass, then you should increase the speed, but at the same time you need to mow in the gas discharge mode.

Now consider the main factors that are important to consider when working with a tool:

Now that you know how to properly mow with a brushcutter or trimmer (by the way, these tools differ only in name), you can proceed to ennoble the homestead territory or summer cottage. When the tool is not used for a long time, all fuel should be drained from the tank. Indeed, with prolonged storage, it is common for oil to precipitate, which will lead to negative consequences. A similar situation with the storage of finished gasoline diluted with oil. Keeping it diluted for longer than 2 weeks is not recommended.

Summing up, it is worth noting that working with a gas trimmer is not at all difficult, and even a woman can handle this, which proves the clip presented below. However, the operation of the tool should not be treated negligently, as if safety precautions are not followed, serious injuries may result.