How to Mow Tall Grass with a Trimmer

Greetings, friends! Today we will consider the question of what is better to mow grass. With a disk or fishing line. As you know, on trimmers. Both gasoline and electric. Both options can be used for mowing. At the same time, many have the question of what is best to use, and in general, why there is both one and the other cutting device. I will give an explanation on this issue in this article. 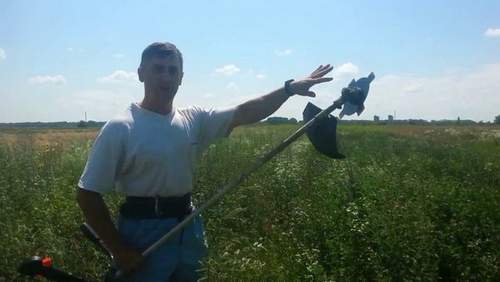 The main purpose of the disc is mowing tall and dense grass. It bites into it much more efficiently, so its performance in this case will be greater. In addition, mowing such grass, he does not cut it. It falls to the ground as a whole. It is for this reason, for example, to harvest hay you need to work only with a disk.

He will also effectively cope with the young growth of the bush, if it comes across. As a rule, the line cannot cope with this shoot.

Than 200 types of trimmers in one place at the lowest prices. Click to see

But when there is no high thicket, but it has already grown to such a height, when it already needs to be mowed down, the disk will no longer help. He simply strokes low grass and almost does not mow. Many at this place recall a wheeled lawnmower, on which a metal knife is also mounted. After all, she can cope with a relatively low lawn. Why is the trimmer not able to do this?

See also  What Are The Trimmers

The thing is that with wheeled lawnmowers, knives have bends that allow it to be also a propeller. Due to this, during rotation in the deck there is an air flow from the earth upwards, due to which each blade of grass is stretched and easily lends itself to the blade.

When working with a trimmer, such an air flow does not occur, which is why the disc mows badly. A certain danger should also be mentioned. It lies in the fact that during operation, you can accidentally touch a stone or other solid object. Because of this, a big return on the hands of the operator can occur, as well as a gearbox breakdown, not to mention the disc itself.

In addition, fragments of stone can fly along an unpredictable trajectory. Therefore, before mowing, you need to make sure that there are no solid objects in the area.

Unlike a knife, it confidently mows a relatively low, but already requiring mowing, shoots. Therefore, to care for the territory and keep it in a neat condition, only a fishing line is needed.

See also  How to Make a Homemade Outboard Trimmer Motor

Thick growth can also be mowed with it, though it will take longer, because it will not be able to mow down immediately to the root. It is advisable to start cutting from the top, gradually going down. In addition, fishing line in the thickets themselves need to climb gradually, and not sharply, as you can do with a knife.

Grass cut in this way is chopped into small pieces, which is why it cannot be used for hay. But in a crushed form, it is evenly distributed over the surface, which many do not even collect it, but leave it to decay, since it does not interfere much. Although, if it interferes, then no one forbids to collect it with a rake.

Working with the fishing line will also be safer, since if it hits stones and other hard objects, there will be no discomfort and nothing will break at the trimmer, unless of course the stone is touched by the mowing head itself. In this case, it can break.

See also  How To Line The Trimmer

Based on the foregoing, we draw the following conclusions. For mowing under hay, you definitely need a disk. Otherwise, the grass will be chopped into small pieces and will no longer be suitable for hay. In addition, you can mow with a knife if a small shrub comes across on the site.

To maintain a clean, overgrown condition, a fishing line is suitable. Even if initially there are high thickets, they too can be mowed with it slowly. Also remember that it is also safer.

This is the difference between these two types of mowing. Thanks for attention!