How to properly adjust the carburetor of a Chinese chainsaw 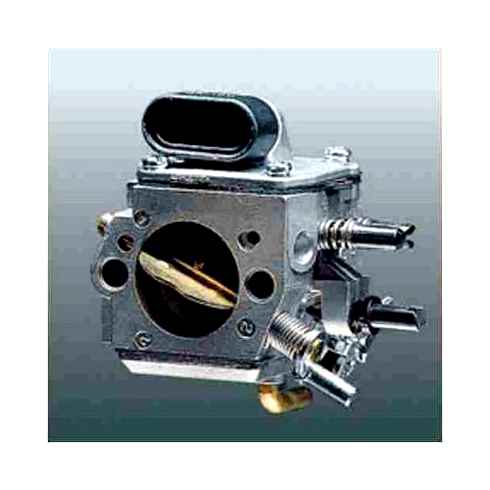 Why a chainsaw shoots into the carburetor?

If during the start and operation of the tool, its owner hears sounds reminiscent of gunshots, then it indicates a malfunction of the node, in which the fuel is mixed. This is most likely caused by such malfunctions of the chainsaw carburetor: 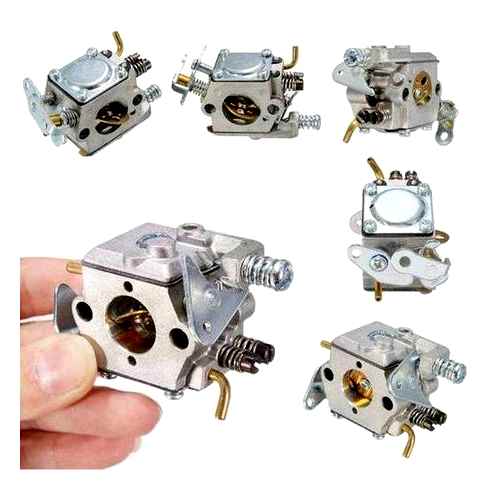 If the popping noise comes from the muffler side the problem is in oversaturation of the fuel mixture with petrol. If there is too little air in the fuel, it will burn not only in the chamber but also in the silencer. This is evidenced by a large amount of soot on the inner walls of the muffler.

How the chainsaw carburetor works. principle of operation

The operation of the unit in question, despite its complex design, is simple and understandable even for beginners. Principle of operation is based on the following actions:

The simple principle of the carburetor ensures trouble-free working of the engine. The quality of tuning determines how the power tool behaves when idling and in operation. The mechanism in question has a direct effect on the performance of the entire tool. Adjustment quality affects tool life.

Internal combustion engine of a chainsaw is based on burning a fuel-air-oil mixture. To mix the gasoline-oil mixture with air, and then batch feed it into the combustion chamber, the engines are equipped with a rather complicated by design carburetor device. When you buy a new chainsaw, the carburetor is already factory-set, but over time it becomes confused and the device that controls the flow of fuel needs to be adjusted again. If you don’t know how a carburetor works and don’t understand how the module works, it is very difficult to set it up correctly.

See also  What Oil Should Be Poured Into The Chainsaw

In STIHL 250 and 361 chain saws, as well as in Partner 351 and 350 carburettor adjustment is done with the help of screws H and L by adjusting the proportions of gasoline and air. If they are loosened, it is possible to add a large quantity of fuel and therefore the RPM will be high, otherwise the opposite will be true.

Partner chain saws adjust idle speed with a screw marked T, and Stihl is usually marked LA. A typical chainsaw adjustment is the final test. In general, after such adjustments the percentage of fuel in the working mixture is more than air, which does not correspond to the optimal parameters. But it is important to keep them in during the first hours of operation during the break-in period. After that you may adjust the saw yourself, but it will work fine even with the factory settings.

But if you decide to adjust it yourself, you should do it in this sequence:

First turn the L screw in both directions to find the maximum engine speed. If that point is found, turn the same screw ¼, thus slightly reducing the rpm. If the chain continues to idle, turn the T (LA) screw immediately until the chain comes to a complete stop.

See also  How To Choose A Chain For A Chainsaw

After adjusting the maximum rpm with the screw H, check the frequency with the tachometer. In the event that it does not correspond to those specified in the service book, the adjustment must be repeated. If at maximum revs there is a lot of smoke coming out of the exhaust pipe, the mixture is too rich in fuel, if noises are heard and the engine is getting warm, it is too lean. Then you need to adjust the idle RPM. When properly adjusted, you should see a smooth sound of the engine at low RPM, and the chain should not move.

There are only three adjustment knobs for the carburetor, they are spring-loaded screws for the flathead screwdriver. There are a pair of screws on the bottom, L on the left and H on the right. A little higher is the T (or S) screw. So, that’s what they’re for:

Chainsaw Carburetor Adjustment | How to Tune ‘Correctly’. by Craig Kirkman

The structure of the first two adjusting screws is very simple: on their ends there are needles inserted into spools with variable cross-section (cones). All have right threads, so tightening the screw clockwise, you drive the needle deeper and reduce the flow. Turning it counterclockwise does the exact opposite.

This is how the quality of the mixture is regulated in the different modes of operation. If the fuel increases, the gasoline does not have enough time to burn completely and the engine speed is low. When the mixture is lean, the rpm increases and the engine temperature rises as well. It is worth noting that even if the screws are tightened all the way, the flow of both channels is not completely blocked, unless there is a blockage.

The structure of the carburetor

In this short review we will not be able to describe in detail all the details of the carburetor and thoroughly familiarize with all the nuances of its work, but we will dwell only on the main points.

See also  How To Put A Carburetor On A Chainsaw

A carburetor consists of these components:

A little more detail about lean and rich mixtures. 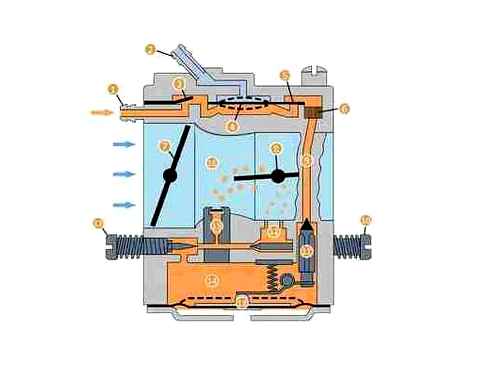 A rich mixture is a fuel mixture in which the amount of fuel fed to the carburetor. In this case, the fuel does not have time to burn completely and less energy is produced than at the optimal fuel/air ratio. Partially empty fuel ends up in the muffler, and the chainsaw emits heavy smoke.

In a lean mixture there is an excess of air, which is also not good, because it has its own disadvantages. Namely: insufficient energy during the flash (and thus a loss of power as a result), excessive heating of the cylinder due to insufficient lubrication and high speeds, which leads to scuffing, and there is not far and to seizure of the engine.

How the carburetor works?

All processes in the engine are not cyclical, but constant.

Cleaning a chainsaw carburetor and how to do it correctly

One of the most important mechanisms of a chainsaw is the carburetor. It is designed to dose the fuel-air mixture into the engine cylinder. Without it, an internal combustion engine would not work, and it is often the cause of instability in the engine. To correct the situation, you will need to clean the chainsaw carburetor, which you can do yourself.