How to put a cutting wheel on the angle grinder correctly

How it is right?

Today, after another dispute. with what side to put a disk on the “angle grinder”. I decided to speak out on the subject in writing, yet in my opinion this is quite an interesting question.And besides in the future rather than once again to start demagoguery, it is better to throw a link to this record.I work in the shop (mostly power tools) and see that quite often worn angle grinder with a “jammed” discs. Sometimes it sticks so badly that you have to take it apart and use a large gas wrench to unscrew the nut.It is interesting that the nuts are stuck only on machines in which the disk is set to the right, ie “sparking” from the machine. If you consider that under a NORMAL load torque on the spindle is small then such a bad self-tightening should not occur, but it occurs, why??. Because of the shock loads, which, when you install a disc on the right, is a common occurrence.Why this happens is easier to explain on the example (too lazy to draw). start the bike, and holding it by the handlebars trying to arrange a slippage of the leading (rear) wheel. So, the fullest analogy with the cutting wheel with the disc “away” will be if we hold the wheel in front of the motorcycle. Try it, you will like it. If you like to cut “from yourself” you will like it for sure.Here is an important caveat. the higher the support and the shorter the base, the more interesting effect.And more, the center of mass hammers and hands that hold it is above the plane of cutting (more precisely the vector of force), and it leads to a strong jerk, and as a result, often breakages and injuriesIn short, it turns out that the work of the angle grinder “from myself” is something like a dangerous ride with slipping on the verge of “getting up on the goat.

Now how it will be if the drive stands on the left and “sparks” under the hacksaw: Take the FRONT DRIVE motorcycle, of course turn it on, turn the gear and holding the trunk, admiring how wonderfully the front wheel slips. That’s what he was doing, not “driving in” under the fulcrum, increasing the grip and trying to raise the steering wheel like he did with the rear wheel drive.So it turns out that, as a system, the “front-wheel-drive version” is more stable and predictable, even if we push the steering wheel up.Well, that’s it It may be idiotic, but it’s figurative.

I was cutting once a couple of months ago, sticking out under the ceiling rail, cut one standing on a stool a huge angle grinder to 2.2 kw, and with the protective hood off (there is no way to use it with the hood removed)!).If I was cutting “from myself” I would be killed, and more than once

Discs for the angle grinder differ from each other by the following main features:

For the best understanding, let’s look at the main types of angle grinder discs and define their uses:

How to use a Cutting Disc with an Angle Grinder

The differences between the sides of the abrasive wheel

The two sides are different: one has a label with the characteristics of the circle, and the other is made monochrome coating. Special mention should be made of the metal ring, which has a direct impact on operational safety.

The main purpose of this element is to protect against the tightening of the abrasive, which can be damaged by hard tightening during installation. In addition, it increases the area of the supporting surface, and simplifies the process of removing the wheel, preventing it from sticking.

Over 70% of all activities that performs angle grinder. this cutting work. The tool cuts almost all materials. from metal to stone, but you should study the instruction manual of the consumable when choosing. There are models of angle grinder and cut-off discs that do not perform certain functions, such as cutting wood.

See also  How To Use A Puncher Correctly

What you need to use to set the disc

The operation is quite simple and does not take more than a few minutes if you choose the right guide. But to do this kind of work, you need to adhere to the basic rules, and use a special tool.

Having decided on the tools that will be needed for the replacement, you can proceed directly to the installation:

Important! Do not apply too much force when tightening, otherwise there is a risk of damaging the disk ring.

Which side of the disk on the angle grinder?

Many people know an angle grinder as an angle grinder. This tool is available in nearly every repair shop. It can be used for sawing and grinding workpieces made of various materials. The working process is carried out as a result of the rotation of the wheel. Many sawmakers have the question: “Which side of the saw blade should be mounted??”Let’s try to solve this problem.

See also  How To Remove A Disc From An Angle Grinder 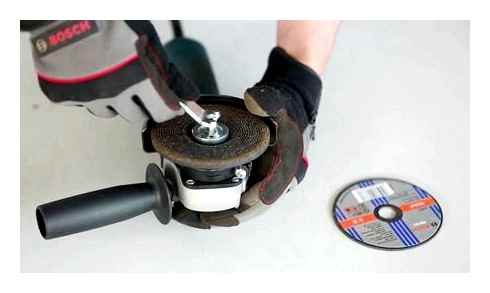 Which side of the disk is placed on the angle grinder?

Which side to put the cutting disc may depend on several factors. Firstly, if the disk is not flat, you can only put it one way and the question disappears by itself. Secondly, if the circle is still flat, you can be guided by the label. if the angle grinder turns away from himself, he sets the label inside, if on itself, then, respectively, outward. If this principle is not followed, you can expect undesirable results. disk breakage during sawing or just its rapid wear.

As for which way the disk on the angle grinder rotates, it is primarily a matter of safety. It is believed that concrete should be cut in the direction of the blade rotation or towards yourself. Ideally, sparks should fly to the side to the left of the person working with the tool. If this cannot be done, another position can be used where the shear of sparks is directed downwards. In any case, you can not allow a situation where sparks fly away from the user, because in the case of a sharp jamming of the disc, the angle grinder will be directed in its direction.

In other words, it is extremely unsafe to cut materials against the direction of rotation of the disc or away from yourself because in the case of a wedge, there is a sharp throw of the angle grinder in the direction of the person working. By the way, if there are additional questions about how to install the disk on the angle grinder, you can also view training videos, of which there are more than enough on the Internet today.

If you still have questions or need advice on changing and installing the discs, it is enough to leave an application on the website or call the contact number and our experts will tell you how to act correctly. You can find our complete range of diamond discs in the diamond discs section.

Is it possible to install a disc of a non-native diameter on the angle grinder?

You have been using an expensive 1600 watt angle grinder for a long time with a disc size of 230 mm. But discs have a nasty tendency to run out. It is not always possible to have a large disc at hand. And if the work is trivial?? You don’t have to buy big pancakes for 10 minutes cuts. But there are a lot of 125 mm, 180 mm. Is it possible to use them in our tool. We will tell you about it in this article.