How To Reduce Fuel Consumption On A Trimmer

The increased fuel consumption and the rapid formation of soot on a candle scythes when using a properly prepared fuel mixture indicate the need for carburetor adjustment. This describes how to set trimmers with carburetors that have one screw for adjusting the fuel supply. 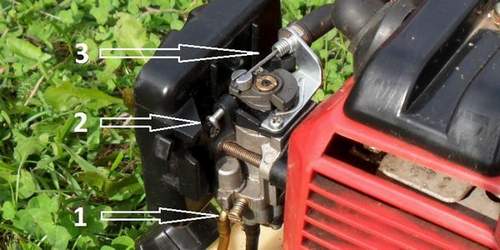 Start the brushcutter and wait until it warms up.

Start slowly turning the fuel mixture adjusting screw until the engine stalls or stalls unless you catch the moment. After that, unscrew the screw a quarter of a turn if the engine is not dead, or half a turn if it is dead. Start the stalled engine. Check, by opening the throttle, how the engine accelerates. Continue to unscrew screw No. 1 a quarter of a turn until the engine starts to confidently gain increased speed when it is progazovaniya. This will be the moment of the most economical stable engine operation. At the PRORAB-8406 gas trimmer, the adjusting screws are turned clockwise and unscrewed. On the contrary, some other brands of brushcutters may be vice versa.

We proceed to adjust the low speed. Screw No. 2 limits the return movement of the throttle lever. Wrapping it, we increase idle speed by unscrewing. Reduce. Adjust so that the engine runs confidently at low speeds and even slightly faster (for a better start), but so that the reel with fishing line or knife does not rotate, and before starting to rotate, there is a sufficient margin of speed. If the engine starts poorly, still increase idle speed.

READ  How To Wind A Fishing Line From A Trimmer

After adjusting the fuel mixture supply and low revs, check how the engine of the brushcutter will work at maximum revolutions. If necessary, limit the maximum speed to the required level using the No. 3 hollow screw. Loosen the locking nut and screw in to decrease the maximum speed or unscrew to increase. After adjusting, tighten the nut. Setting the maximum speed is necessary to protect the trimmer motor from overheating and the ability to use the release key lock to reduce fatigue of the right hand.

In the future, it may be necessary to adjust the trimmer carburetor. For example, if the engine, when operating at full load, starts to pick up poorly, loosen screw No. 1 by another quarter of a turn. If it is difficult to start, increase the idle speed. Weather conditions and the quality of the fuel mixture can affect the operation of the brushcutters. The vibration can even make the adjusting screws rotate.

My first attempt to adjust the scythe carburetor yielded nothing, because the spring of the fuel mixture adjustment screw prevented it. The factory spring turned out to be too thick in a compressed state and did not give the opportunity to reduce the fuel supply to the required level. I had to pick up another spring and continue adjusting after replacing it.

READ  How to put the protection on Trimmer

A trimmer is a broader concept than a trimmer (motokosa), since it can also be electric. Gas trimmer and brushcutter. This is the same.

Some authors claim that the trimmer. It is a weaker tool, unlike a more powerful brushcutter, which can be used to mow shrubs. Personally, I have a tool with a maximum power of 1.7 kW and capable of mowing a small shrub up to 10 mm thick, as stated in the instructions. The user manual is called “Petrol trimmer. “.

I read somewhere that if in the instruction manual for the brushcutter and on the oil canister different proportions of the fuel mixture preparation are indicated, the proportion indicated in the manual should be used.

For a long time he did so. Excess oil flowed from the engine to the gas tank and soot was constantly forming on the candle, as the manual indicated the proportion for the engine being run-in 1:25, and on the canister. 1:50. After the transition to a proportion of 1:50, the appearance of oil drips stopped. The candle continued to burn, but with less intensity (the carburetor was not yet adjusted).

READ  How To Remove The Husqvarna Trimmer Head

In the worst times of working with a trimmer with an unregulated carburetor, the engine stopped starting after using each fuel tank. And only after cleaning the candles from soot could we continue to work.

To clean the electrodes, fine sandpaper was used, and to clean the space between the insulator and the body. Thin clerical paper clip with a bent end. First, the electrodes were wiped from a large dirt with rags, then they were cleaned with sandpaper. After that, the candle was lowered into diesel fuel and the moistened soot was scraped off with a paper clip from the surfaces of the insulator, the inside of the housing and between them. Next, the candle was lowered several times in diesel fuel, which was then shaken off with the dirt. Sometimes the cleaning procedure with a paper clip and rinsing were repeated. After that, the candle was wiped dry and was ready for further use.

Incredibly, one tank of fuel mixture with an unregulated carburetor can be consumed in less than 10 minutes. Tested in practice when the trimmer was started and operated at high speeds with maximum fuel supply (the adjusting screw was unscrewed much more than normal).