Repairing the gas trimmer starter may be necessary at the most inopportune moment. At the same time, there are two ways to solve the problem: replace a broken part or change the entire assembly. The latter option will cost more. To repair the device with your own hands, in most cases you will need from the tools only a screwdriver with the appropriate tip. Repair work does not take much time and does not require special knowledge. It is enough to know the device, the principle of operation, the nuances of the assembly-disassembly of the starter on the trimmer to achieve the desired positive result.

Gas engine. This is, in principle, the main part of the brushcutter. Its power lies in the range of 0.5-2.5 hp. The movement from it is transmitted to the shaft located inside the hollow rod, and then through the gearbox consisting of gears, already a fishing line or knife (working body).

Also, the brushcutters have the following elements:

All details of the brushcutter are presented in the photo below. 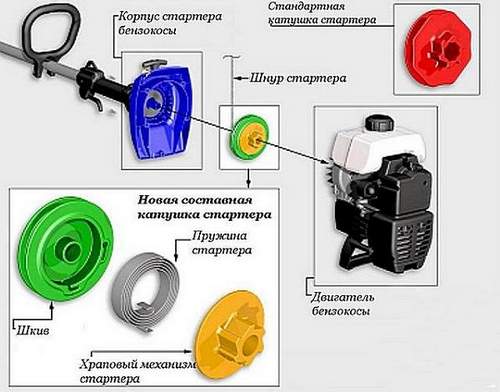 The starter on the trimmer is an integral part that starts the engine to work. It is depicted separately in the two photos below.

Starter mechanisms of various models work on the same principle: during the start of the internal combustion engine, the protrusions marked with the number 1 in the photo above enter the hook with the dogs 3. When the engine starts to work, they return to their previous position due to the action of centrifugal force. A similar role is also played by wires 2.

The process of returning to the initial position of the elements of the mechanism occurs due to the presence of a spring wound around an axis. It unfolds when the rope is pulled. After releasing the cord, it is retracted and wound due to the folding of the spring. During the start of the internal combustion engine, the trigger mechanism rotates its shaft until it starts to work (starts).

It may happen that the starter mechanism is accidentally broken. The consequences will be deplorable if a tattered rope is wound around the flywheel of an operating ICE: then the spring will burst, the pulley will rip off. But such cases when a complete replacement of the starter assembly is required are extremely rare. In most cases, to fix the mechanism, it is enough to put a new spring or replace the cord.

Everything should be done carefully, observing safety precautions, mainly so that the spring does not injure the master during an accidental departure.

Analysis of the starter assembly

Disassemble the start-up mechanism in order to install new parts instead of broken parts in the following sequence:

To change the spring, work should be carefully and accurately: it can under the influence of the force caused by installing it in place, accidentally burst. Even if you carefully remove the roller, the spring band flies off the reel very quickly and can injure your hand with its sharp edges.

Immediately put in place the spring plate does not always work. It often slips, so attempts must be repeated until the desired result is achieved.

See also  How To Start A Husqvarna Chainsaw

After installation of the spring should it pull. To do this, perform the following steps:

It is better to tighten the spring plate together with the partner so that the edge of the cord does not wound inside the starter mechanism.

It is not difficult to assemble the starter on the trimmer and wind the spring, only this should be done carefully and with caution. For different models of petrol brush, the breakdowns of the starting mechanisms are the same, so they are repaired in a similar way. There are some nuances associated with their design features.