How To Spin A Fishing Line On A Trimmer

Since we considered the choice of the trimmer in the previous article, today we will tell you how to properly trim the trimmer with a fishing line, and which is better to choose based on the working conditions.

After you bought a trimmer and began to use it actively, sooner or later the question will arise about replacing the fishing line, since this is the most wearing element in the tool, then intensive use of the trimmer will lead to frequent replacement of consumables.

What types of woods are

The most common type of fishing line, which is suitable for almost all types of coils. Round cord. This is an ordinary fishing line suitable for mowing juicy grass, but mowing dead wood with it will be much more difficult, and even more so it can not cope with the bush.

As a rule, the diameter by which young grass can be mowed does not exceed 1.6 mm. The thicker the thread, the more coarse grass it can overcome.

There are fishing lines with sharp edges in the form of an asterisk or square, this option is more suitable for mowing dry grass just due to the existing sharp edges, but its disadvantage is more wear and tear and is inferior in strength to round cord.

There are fishing lines with improved aerodynamics with characteristic dents, scales and notches, such a product makes less noise, but they are used only on lawn mowers, since the exit of such a thread from the reel is difficult, it is used most often with discs into which segments are inserted. The disadvantage of this product is its fragility.

Most often in gas trimmers with an engine power of more than 1.5 hp apply cords with a metal cable inside.

This thread is ideal for mowing dry grass and small bushes. The presence of a core positively affects the wear resistance of this material.

The disadvantage of such a cord is its price, which is significantly higher than the listed opponents.

How to remove or refill a fishing line in a trimmer

It takes about 10-15 minutes to wind the line. What is a trimmer coil? Plastic case with a cassette inside, on which there is a special hook for convenient winding of fishing line.

Almost all trimmer coils have a similar mounting principle, this is the central screw-button, when pressed, it becomes possible to pull the fishing line of the required length. The photo below shows some examples of different coils for trimmers.

The bobbins of the trimmers, the motor of which is located near the ground, have a different mount to the axis of rotation, they have two buttons on the spool located on the sides that need to be pressed, otherwise the thread replacement is no different from other cassettes.

The principle of the correct winding of the fishing line is similar in all of the above cases, so for example, consider the standard version with two antennae. 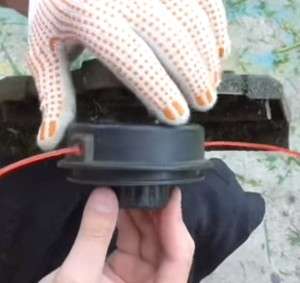 To remove the reel with fishing line, it is necessary to unscrew the screw located in the center, but note that the thread there is left, so you have to turn it clockwise, this is done specially so that during operation it does not open under the influence of centrifugal force.

Next, using a screwdriver, disassemble the head and take out the reel, on which the fishing line is directly wound.

Having measured the necessary length and folded in half, you need to fill the fishing line into the reel, removing, in the end, its ends opposite each other (for this there are special slots for fixing).

After this, it is necessary to assemble the head in the reverse order by threading the ends of the cord into two corresponding holes.

In this, the instructor will open the trimmer head in steps, measure out the required amount of fishing line, usually from two to four meters, and demonstrate assembly and installation on the trimmer.