How to Start a Stihl 180 Video Properly

All chainsaws from the manufacturer “Stihl” have two-stroke engines. Their cold start is carried out according to a similar algorithm. However, on sale you can find models on which there is additional equipment, with it you can start a saw without making much effort. For this reason, the starting procedure may vary.

Algorithm of a saw institution “Stihl 180” 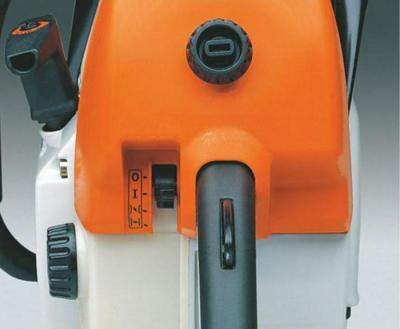 If you have a question about how to start a Stihl chainsaw, then this process can be considered with the example of model 180. In order to carry out work on a cold one must turn on the ignition and set the engine control lever to the lower position. At the same time, the carburetor shutter will block the air from the filter, and the throttle will be open, so the fuel mixture will be enriched.

The starter handle must be pulled several times until the first flash occurs. This will indicate that the mixture has entered the cylinder, and the equipment is ready for the establishment. Before you start the Stihl chainsaw, you must set the control lever one position up. In this case, the air damper will open, while the throttle will remain in the same position.

The starter must be pulled and started. The tool will operate at higher speeds, the throttle will be open. To set the latter to idle, you must engage the gas trigger and release it. In this case, the tool should start working normally. On the described chainsaw model there are no additional devices that would make it easier to start.

This device, compared with the previous one, has some differences in the trigger mechanism. However, there will be no changes in the launch algorithm. The described equipment variant has a system which, by means of a spring in the saw starter, reduces the resistance of the engine.

If you, too, were among those consumers who thought about how to start a Stihl chainsaw, then as an example, we can consider another model that was mentioned above. In it, the feed system is equipped with a hand pump, which makes it easier to start the saw in the cold.

The instruction contains an additional paragraph, which indicates that before starting with a pump, it is necessary to pump fuel into the carburetor. Next, follow the principle that was described for model 180.

Before storing it, you should drain the fuel, and then start the engine and burn the fuel that remains in the system. Preparation is necessary so that the membranes do not stick together during storage. This simple operation will allow you to start the saw after the winter. If you still do not know how to start the Stihl 180 chainsaw correctly, then you should know that it will be easier to do this if you add 2 ml of the fuel mixture to the cylinder before starting through the spark plug hole. This can be done with a syringe.

Institution of a saw with a decompression valve

Users sometimes ask how to start if the tool has a decompression valve. On the model 250 there is none. As soon as the first flash occurs, the valve will be in normal operation. The engine control lever will be set to the position when the air damper is open. Start-up will continue; at the same time, the decompression valve must be pressed again. It does not make the launch quick, but simplifies the process and makes it comfortable, because during the launch the operator will have to put less effort.

If you are not completely sure that you know how to start a Stihl 180 chainsaw, then remember that equipment with a valve, regardless of whether it has a hot or cold engine, must be started using the valve. This will make it easier to crank the engine. So you can extend the life of the starter and reduce the number of torn shoelaces, because such chainsaws have a larger cylinder volume and compression.

Overview of the chainsaw MC 180

This model of equipment costs 11,490 rubles. It is a household tool that will help to cope with work on a summer cottage. With the help of the unit you can get rid of unnecessary knots and cut small trees. The control is single-lever, and due to its light weight it is very comfortable to work with the unit.

The consumer should be aware not only of how to start a Stihl ms 180 chainsaw, but also of technical specifications. Among others, a 35-cm tire should be distinguished, as well as an engine with a volume of 31.8 cm 3. The volume of the oil tank is 0.15 liters. The equipment weighs 3.9 kg. The power of the model is 2 liters. With. The capacity of the fuel tank is 0.25 liters.

Overview of the Stihl 250 chainsaw

Quite often, consumers before buying ask themselves how to get a Stihl 250 chainsaw. This was discussed above. However, this information is not the only one that you should familiarize yourself with before using the model. Among other features, it should be highlighted:

By purchasing this model, you can carry out its quick refueling. This feature is implemented by a cover, which has a patented design. The operator, working with the equipment, will have reliable hand protection. Consumers especially highlight the toothed emphasis, as well as the chain, which guarantees high-quality and quick cutting of wood.

After acquiring the equipment described in the article, you should ask how to start a Stihl chainsaw. This information will allow you to extend the life of the tool. After all, improper handling can cause rapid wear of some parts. It is especially important to know how to prepare the unit for long downtime. This was discussed in more detail above. After reading this information, you can understand how to prepare the device for winter storage.

Sometimes, some consumers are told about the launch features by technical specifications. If this can help you too, then you should familiarize yourself with them. Some of them were presented above, but their complete list is presented in the instructions, which are necessarily supplied with the equipment.