How to Start a Stihl Chainsaw Properly

The question of how to get a chainsaw can be divided into two parts:

The second part will tell you what to do if you did everything correctly according to the instructions, but the chainsaw still does not start. It will also be useful to those who have a bad chainsaw.

1. We start the chainsaw according to the instructions

Different chainsaws can start in different ways. We will analyze the two most popular mechanisms that are used to start a chainsaw that exist today. For example, take the Stihl MS 180 and Echo CS-352ES chainsaws. If you have a different brand of chainsaw, then just try to start by analogy, since most likely you have the same or similar mechanism.

Before starting the description of the start-up process, I want to note that for some chainsaws, the instructions say that before starting the chainsaw, you need to turn on the emergency stop brake. They say it’s safer. However, with a fixed brake, it’s more difficult to get a chainsaw, so it’s better to unlock it. If you do everything wisely, then the chainsaw will not do anything to you during startup. If you are afraid that without fixing the brake of the chainsaw, when you are trying to start it, it may harm you, then it’s better not to take up this tool at all.

The first thing to do before starting this chainsaw is to move the control lever to the lower position (Fig. 1). Note that this lever moves on the chainsaw to the very bottom only if the throttle button is pressed. Therefore, hold down the throttle button and move the lever down. Thus, we close the shutter in the carburetor and fix the gas at the chainsaw in the pressed position. 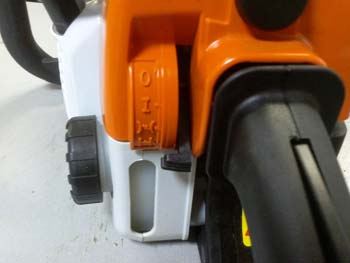 Fig. 1 After you have done this, then to start the chainsaw, you begin to jerk the starter handle with an energetic movement, until you hear that the chainsaw has tried to start and then stalled. After that, we translate the lever for adjusting the position of the damper at the chainsaw one step up (Fig. 2).

READ  How to Adjust a Stihl Chainsaw 180 Video

Now we will analyze the second second mechanism, which allows you to start a chainsaw.

First, before trying to start, turn on the ignition by moving the toggle switch or chainsaw switch to the appropriate position (Fig. 5).

Fig. 5 Then we press the swap primer several times (Fig. 6). Gasoline is pumped into it and after that we press it another 3-5 times. If you have a chainsaw without a primer, then go to the next step.

Fig. 6 Now on the chainsaw we fully extend the lever for adjusting the position of the shutter (Fig. 7). In some chainsaws, in order to start it, this lever can be extended only when the gas button is pressed, while the gas button itself will lock in the pressed position. Others do not need to press the gas button. True, in this case, the gas on the chainsaw is automatically fixed or not fixed at all.

READ  How to Insert a Fishing Line into a Stihl Trimmer

2. Why does not the chainsaw start?

If you did everything according to the instructions, and the chainsaw never starts, then something is wrong with it. Tom may be the fault of some of the most common reasons: no spark; no fuel is supplied; air filter clogged. So, below we offer a procedure that will help identify the reason why the chainsaw does not start.

Procedure if your chainsaw does not start

The first thing I would like to note if you do not start the chainsaw. Do not twist any screws on the carburetor. If you are not an expert, then you still can’t set up something on your own and you won’t be able to start a chainsaw.

Perform the following actions necessary to start the chainsaw in the indicated order, starting to do the action under the next number only if the previous one did not help.

READ  How to Draw a Chain On a Husqvarna Chainsaw

Thus, we discussed in this article, how to start a chainsaw “on the instructions” as well as what to do if a chainsaw will not start. We hope you find these tips helpful.