How to Test Carter Chainsaw Seals

Affordable Solutions for the Home Master

Regardless of the country of manufacture, the mini-equipment equipped with a simple two-stroke engine would belong, any malfunction of it will depend on what the engine is fed with and the quality of the assembly. Of course, the quality of the assembly units themselves can be doubted and you can talk about it a lot and for a long time. Someone is happy, but someone is not.

For example, we only need a chainsaw for one day. We rent or buy the cheapest. For professional sawyers, you will need a chainsaw with a large hour resource, here its cost is noticeable. But what about when they implement one-time equipment as professional or as semi-professional also at the corresponding price? We then ignorant do not know about it. So everything breaks, and sometimes right away.

Two-stroke engine failure or its breakdowns are different and depend on a large number of reasons.

Here is an example. The owner used the brushcutter for several years. Scythe fell into other hands and here is the result. The engine jammed, but the user did not understand why it stalled at the same time. ‘A good knock comes out’. The piston had a marriage in casting, which was revealed at that very unnecessary moment. They tried to make the day, but all to no avail. At the opening of the piston, the aluminum particles of the piston were ground against the cylinder wall.What is the compression here? A finger pressed a candle hole and a newspaper wad inserted a master. Blamed the carburetor, and in vain.

Causes of malfunction of the two-stroke engine of a chainsaw or chainsaw.

1. Violation of the tightness of the gaskets and individual parts of the unit.

Carburetor contamination and the formation of additional soot on the piston head and spark plug. The more dirt gets into the working chamber of the cylinder, the more noticeable is the smoke in the exhaust gases. Smoke from light gray to black with a corresponding burning smell. The exhaust port of the muffler and cylinder are covered with an oily or dry carbon deposit that narrows the openings. The piston and the bottom of the cylinder are covered with soot, which, depending on the nature of the contaminants, may be solid or have an appropriate viscosity. Engine shutdown is possible due to shorting of the spark plug electrode to ground or due to piston jamming. In the best case, compression rings will seize or engine detonation will occur after the ignition is turned off. 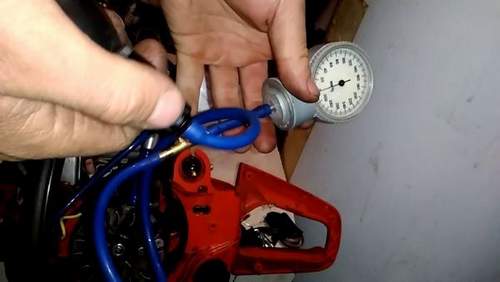 Air leaks, depletion of the mixture or its absence. The engine can hardly start with a closed choke, but will not work in normal mode. No idle. The carburetor is covered with moist dust and in some cases you can see air bubbles or fuel leaking at the joints of the carburetor parts.

With the carburetor air shutter closed, a cold engine can start and run at high revs. Idling is broken or completely absent. When the cylinder is heated, the gap between the cylinder and the carburetor will increase and the engine will stall. Before that, he will begin to lose power in optimal mode, not to mention the maximum power mode.

In one of the periods of the engine, the piston moves down the cylinder. Passing by the inlet window, he cuts off part of the volume with the fuel-air mixture formed in the diffuser with his skirt and passes the mixture into the upper part of the cylinder through the bypass channels / photo 1 /.

With poor tightness between the cylinder and the crankcase, the piston will not create enough pressure necessary for the fuel pump to work, and will not be able to move the fuel-air mixture into the upper volume of the cylinder.

Compression can be good or even very good, and the pressure for the fuel pump to operate is small or absent. The engine will not start or will start with great difficulty, but not for long. A noticeable increase in fuel consumption.

When the gasket is broken, there is a microcrack in the crankcase or the cylinder pinch bolts are slightly depressed, the pressure created by the piston to operate the carburetor fuel pump will be insufficient or even absent. And no matter what they do, the engine will not start. Even when after the fuel is injected into the carburetor diffuser or directly into the cylinder through the spark plug hole, the engine “starts”, it will work as long as there is enough fuel injected. And this is a second or a little more.

READ  Inexpensive Chainsaw Which Is Better And More Reliable

When the ‘caring’ owner installs a new gasket somehow, when the hole is clogged with dirt or is blocked by the gasket, the engine will not show even a ‘sign of life’. This will be a great mystery to many. A trifle, but what a dependency!

The engine hardly starts, the idle is unstable, failures in transient operation are observed, fuel consumption is increased. There are signs that, in case of leakage between the cylinder and the crankcase. There are noticeable smudges under the flywheel of the starter.

Inaccurate assembly, when releasing the coupling bolts, during thermal deformation, the tightness between the cylinder and the engine muffler is impaired. During engine operation, the noise level increases. The engine ‘roars’. Oily smudges are visible at the junction. Fuel consumption increases slightly.

Recommended gasoline for the corresponding engine must be mixed with oil that lubricates the working surface of the cylinder, piston with compression rings, crankshaft, connecting rod with bearings and piston pin. At the same time, during combustion, the oil should not coke. Excessive soot will lead to rapid wear of the engine, and worse. To jam.

Nagar forms under the rings. When the engine is new, an excessive amount of oil in gasoline forms a deposit, which sticks out the rings, increasing wear on the mirror surface of the cylinder, that is, ‘writes the group’. On the cylinder wall, longitudinal scratches from the piston rings squeezed by soot are visible.

Sludge may also block the silencer inlet. The sound of the engine running in this case is dull. At low speeds it works without load. From the exhaust pipe, the exhaust gases move with a low pressure and contain a lot of smoke. With increasing speed, the engine stalls. Noticeable emissions of gases to the outside through the carburetor with the air filter removed.

Since the piston cannot squeeze out all the exhaust gases from the cylinder, it cannot also draw the required amount of the required fuel-air mixture into the cylinder. The more the muffler opening is blocked, the engine starts with great difficulty, or even does not start at all.

Possible and spark plug defect, in which the whole body. An insulator with a central electrode, rotates inside the nut. Compression with such a candle drops slightly. On the candle body, in a circle around the base of the insulator, a weak soot from gas leakage during the explosion of the fuel-air mixture in the cylinder is visible. View in a new window.

In order to at least somehow refine on a worn out engine, you can increase the amount of oil mixed with gasoline. But this is not for long.

CHAIKA.NET 2021
We use cookies to ensure that we give you the best experience on our website. If you continue to use this site we will assume that you are happy with it.OkPrivacy policy